This plaque along the Chicago Riverwalk commemorates the 1915 Eastland Disaster, one of the most deadly maritime disasters of the 20th century. The capsizing of the S. S. Eastland led to the death of an estimated 848 passengers and crew and remains the largest loss of life from a single shipwreck on the Great Lakes. Most of the victims were factory workers and their children, and twenty-two entire families saw the loss of both parents and all of their children on that day. On the morning of July 24, 1915, four major passenger steamers ready to take over 7,000 passengers to the Western Electric Company’s company picnic across Lake Michigan in Michigan City, Indiana. On the Eastland, nearly 2,500 Western Electric employees, crew members, and employee family members were on board. Around 7:30 am that morning, while still docked in the Chicago River, the Eastland capsized. Out of the 2,500 passengers, 844 passengers and four crew members drowned. While the Eastland Disaster made headlines for a few days, media coverage soon focused on other events such as the marriage of a millionaire heiress in Michigan the following week. More passengers lost their lives in this disaster than the Titanic, although far more crew members lost their lives on the Titanic than the Eastland. That the Titanic tends to focus on the death of passengers while few people remember the Eastland demonstrates the tendency for tragedies involving non-elites and working-class victims to receive less media coverage. the story of the Eastland might have also ended in the wrongful arrest of crew members had it not been for the efforts of attorney Clarence Darrow who demonstrated the innocence of the chief engineer and other crew members. 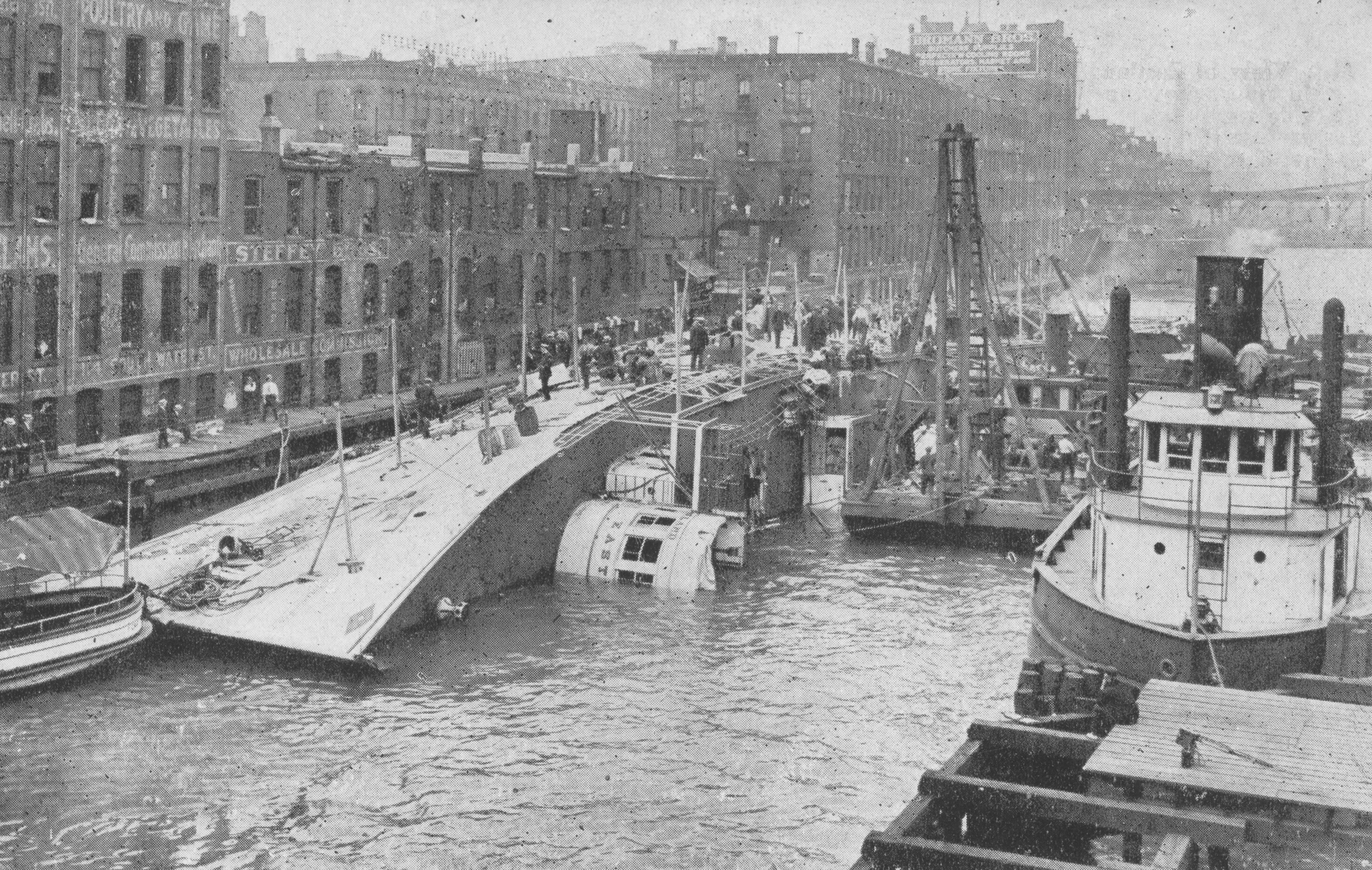 Another view of the disaster 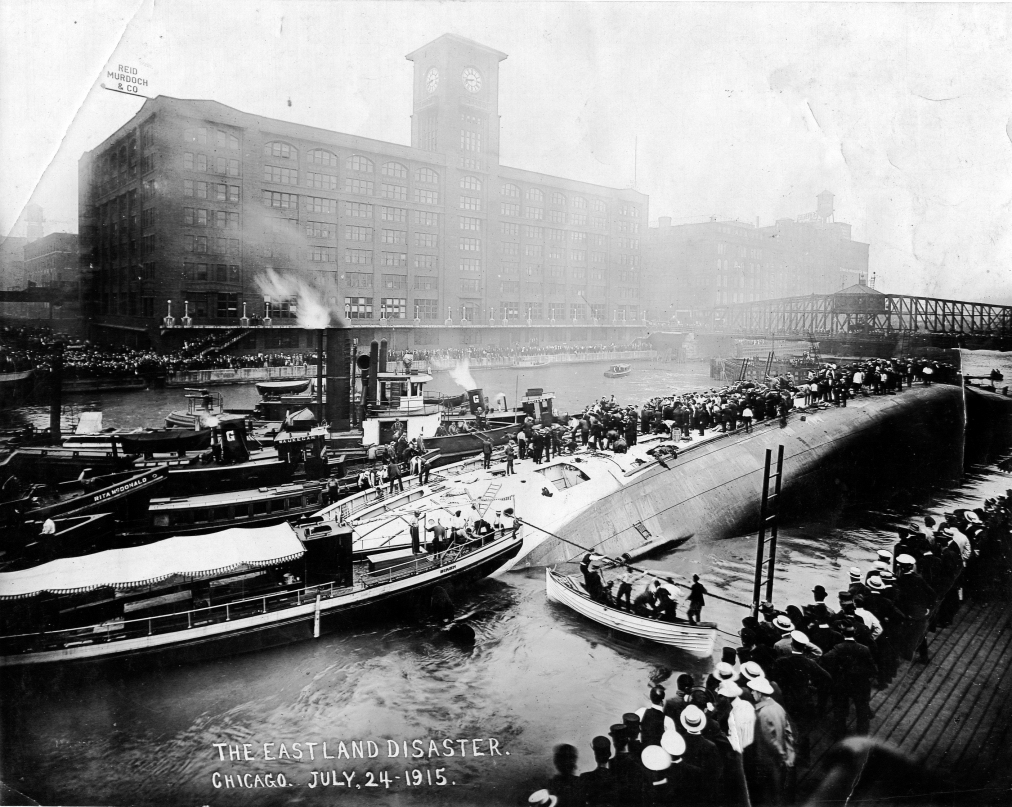 Body of woman pulled from the hull of the ship 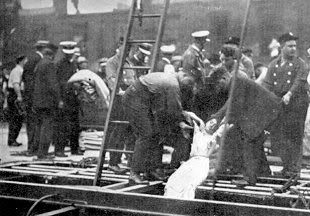 The horror of the disaster reflected on a man's face 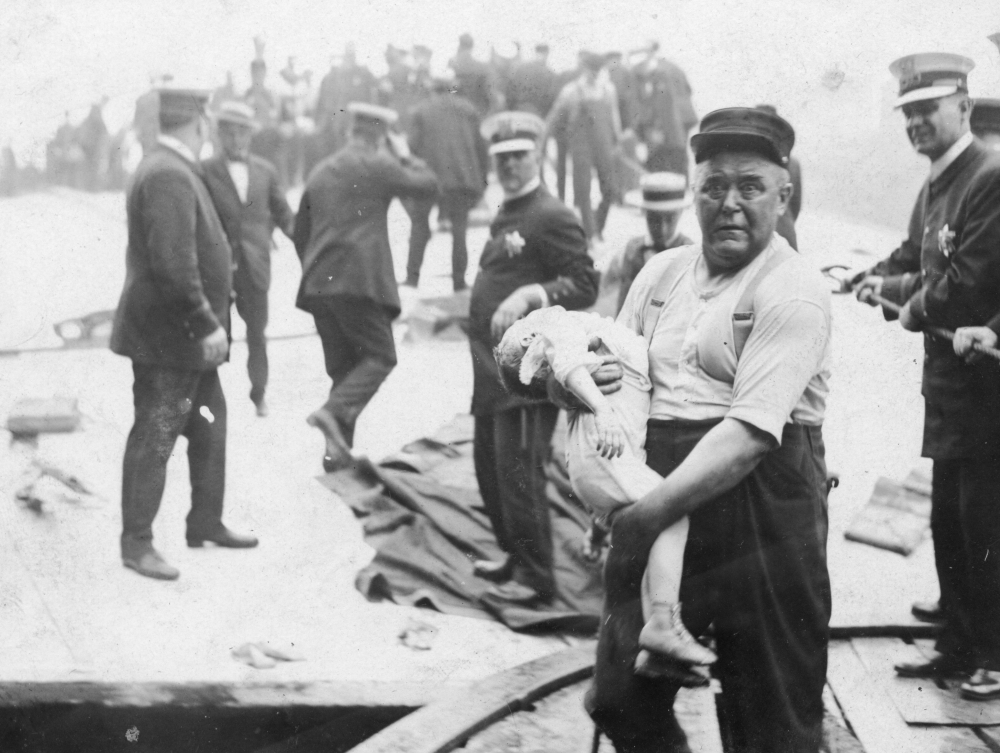 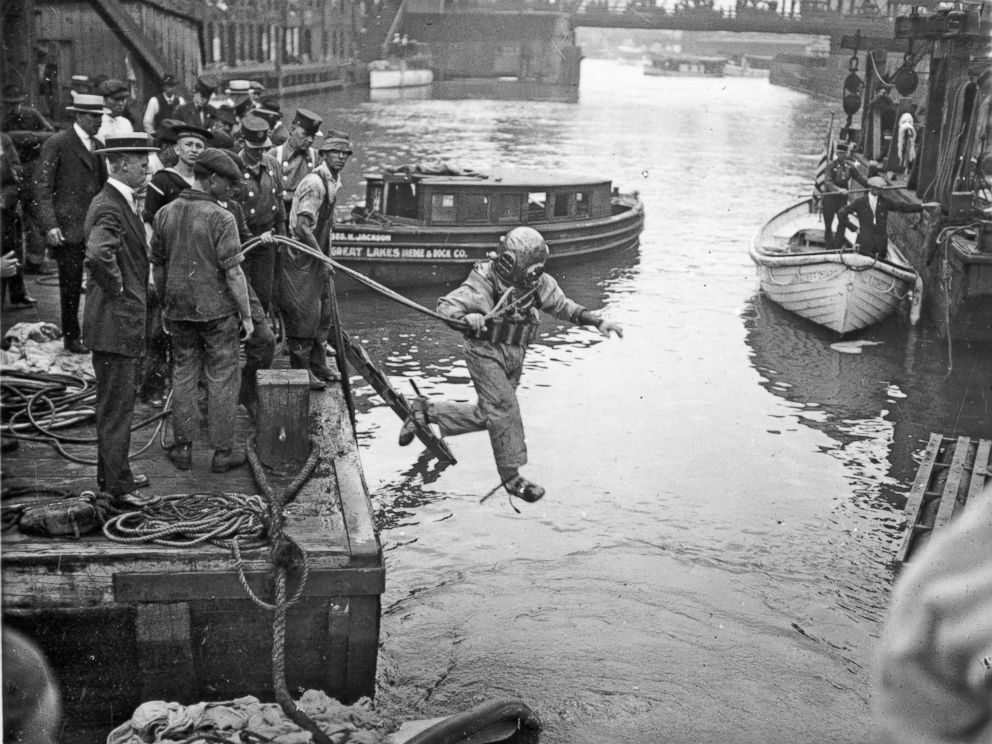 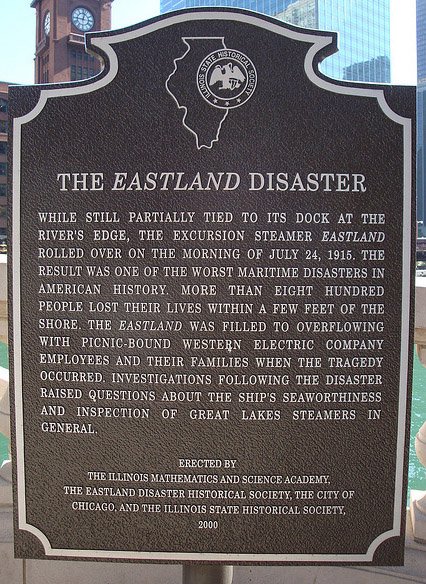 History of the Eastland Disaster

The SS Eastland was first commissioned in 1902 and named in 1903. During the ship’s first voyages on Lake Michigan, many discovered significant flaws in its design. The most prominent flaw was the top-heavy construction that resulted in a high center of gravity. Between 1903 and 1915, many noticed that the ship was susceptible to listing. Furthermore, after the Titanic disaster in 1912, President Woodrow Wilson ordered boats to supply sufficient lifeboats to accommodate passengers. Unfortunately, the extra lifeboats made the Eastland more top-heavy and therefore more likely to capsize.

On the morning of July 24th, 1915, thousands of Western Electric Company employees lined up along North LaSalle Street to board the SS Eastland. Many were Czech immigrants and other working-class immigrants who rarely had opportunities to enjoy time with their families. The air was festive as immigrant families looked forward to the company picnic.

As passengers walked up the gangplank onto the ship that morning, however, crew members noticed the ship seemed to lean to one side regardless of the water pumped into the ballast tanks to keep the ship’s shifting load on an even keel. The morning was fairly chilly with a light rain, so many passengers immediately went below deck to warm up and rest before the picnic.

With over 2,500 passengers on board, the captain of the ship, Captain Harry Pedersen, gave the order to embark. The engines roared, but immediately it was apparent that the Eastland was slouching on its port side. Suddenly, passengers started to notice that the increasing tilt, and it was at this point that the ship’s warning whistle blew. The ship passed a tilt of 30 degrees and continued rotating, with water gushing in its port side. Around 7:28, the tilt became too much, and the Eastland capsized.

Writer Jack Woodford, a witness to the disaster, described the scene. “And then movement caught my eye," Woodford wrote. "I looked across the river. As I watched in disoriented stupefaction a steamer large as an ocean liner slowly turned over on its side as though it were a whale going to take a nap. I didn’t believe a huge steamer had done this before my eyes, lashed to a dock, in perfectly calm water, in excellent weather, with no explosion, no fire, nothing. I thought I had gone crazy.”

During the capsize, many passengers were thrown into the river. Others became trapped underneath the ship’s hull. Inside, the capsize tossed passengers around and some were crushed by furniture, refrigerators, pianos, and other pieces of equipment.

Two accounts of the disaster are as follows:

“When boarding the boat we all remarked jestingly: ‘The boat is listing!’ Reaching the big dancing hall on the lower deck where many hundreds of excursionists were enjoying the music, we noticed that the floor was strongly tilted. Then a man cried: ‘All hurry to the other side, lest the boat tip!’ Even now we enjoyed rushing up the sharply inclined dance floor, when suddenly the mighty boat rolled to the opposite side, and all occupants were hurled into a helpless heap. In the dance hall the furniture, the tables and chairs, the heavy piano, the large icebox and counter of the tavern, crashed upon the poor victims, so that many were killed outright. Those who had been on deck were trapped deep down in the river, under twenty-three feet of water.

I was one of the few who came out of the water although I was imprisoned inside the dance hall. I could swim well and tried to rescue a little girl, but a man took hold of my arm and pleaded, ‘Lady, please save me!’ I screamed: ‘Let me go! I have all I can do to save myself and this child!’ Then the fellow pulled me and the child down to the bottom. I fought him off, and in the scuffle I lost hold of the poor child. Only five other girls and men were swimming within the dance hall. Luckily they found a ledge to which they now clung, and they called me to come and hold on. For half an hour we took this rest, but the suspense became unbearable. We screamed for help. Finally we were noticed and strong arms drew us through a porthole.”

“I shall never be able to forget what I saw. People were struggling in the water, clustered so thickly that they literally covered the surface of the river. A few were swimming; the rest were floundering about, some clinging to a life raft that had floated free, others clutching at anything that they could reach—at bits of wood, at each other, grabbing each other, pulling each other down, and screaming! The screaming was the most horrible of all.”

McCarthy, Michael. Ashes Under Water: The SS Eastland and the Shipwreck That Shook America. Lyons Press, 2014.