Artist David Adickes designed this 67-foot tall sculpture of Texas leaders Sam Houston. The monument honors Houston's leadership during the Texas Revolution and his defeat of Mexican General Santa Anna. The statue is named “A Tribute to Courage” and is the second largest freestanding statue in the U.S., second only to New York's Statue of Liberty. The statue was created in 1994 and is located next to the Huntsville Visitors Center, who advertise the monument as the “World’s Tallest Statue of an American Hero.” Although Houston is regarded as an effective military leader and statesman by most historians, it is important to know that many Texans despised the former governor for his opposition to secession. Despite Governor Sam Houston's opposition to leaving the Union, Texas joined the Confederate States of America during the Civil War.

Sam Houston Statue. The Visitor's Center provides guided tours Monday through Friday from 9-5pm, Saturday from 10-5pm, and on Sunday from 11-5pm. 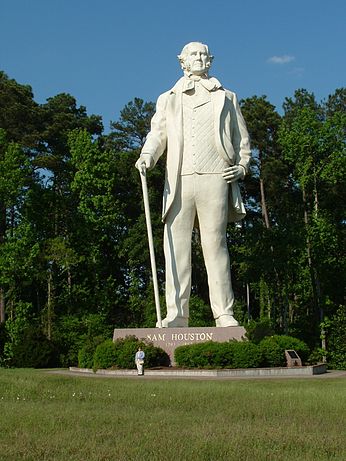 Sam Houston monument plaque. "Texas will again lift its head and stand among the nations. It ought to do so, for no country upon the globe can compare with it in natural advantages."~~Sam Houston 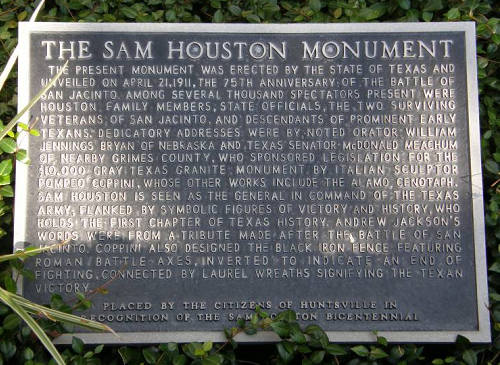 Drivers on on I-45 near Huntsville can't help but notice this towering statue of Sam Houston, one of the most important figures in early Texas history. The statue is located next to the local visitor's center, providing a nice place to stop and relax, take pictures, and learn the history of Texas and the often controversial leadership of Sam Houston. Widely-regarded as an effective leader by most who study Texas history, Houston's tactics were heavily criticized as Mexican General Santa Anna's army marched virtually unopposed throughout southern Texas. Recognizing his army's weakness, Huston avoided a pitched battle, allowed Santa Anna's army to destroy the Alamo, and also avoided concentrating his small rebel force until Santa Anna had divided his own force. Given the unlikelihood that the Texas rebels could have defeated Santa Anna's large army prior to their ultimate victory over his scattered forces, military historians credit Houston's Fabian tactics of avoiding battle.

The monumental Sam Houston statue stands at 67 feet tall and is named “A Tribute to Courage.” It is the world’s tallest statue of an American Hero. It was completed in 1994 with 30 tons of concrete and steel and then set atop a 10 foot high granite base. The vast monument was sculpted by artist David Adickes. The monument was dedicated on October 22, 1994. The entrance gift shop sells tiny reproductions of the statue.

Sam Houston became the first president of the Republic of Texas in 1836 and was re-elected in 1841. Houston's rise to political office followed his role as a military leader, defeated Santa Anna's forces at the Battle of San Jacinto after months of defeats and atrocities by the Mexican army. Sam Houston opposed secession during the Civil War and attempted to keep Texas in the Union. He died in 1863 in Huntsville, Texas, with his wife Margaret by his side.

Sam Houston died quietly with his devoted wife, Margaret by his side. Houston’s last words were, “Texas, Texas. Margaret”. Sam Houston's poem reads, " Texas --- Women is lovely to the sight, as gentle as the dews of eve, as bright as mornings earliest light, And spotless in the snow of Heaven. - Sam Houston"

Sam Houston was Buried in Huntsville, Texas in the Oakwood Cemetery. Houston chose this location. It was across the street from where the Steamboat House once stood. To access the grave site, Exit right on 19th Street as you leave the park. Go to Avenue O (the first stop sign) and turn right. Continue on Avenue O until 11th Street. At 11th Street turn right. Travel six blocks to the intersection of Avenue I and 11th. Turn left and go three blocks to the grave site.