The Bellamy Mansion Museum is one of North Carolina’s best examples of antebellum architecture. It is located in downtown Wilmington. The mansion was built for Dr. John Dillard Bellamy, a physician and planter, his wife Eliza McIlhenny Harriss, and the couple’s nine children. The mansion was built on the eve of the Civil War by enslaved skilled carpenters, and local freed Black artisans. After the fall of Fort Fisher in 1865, Union soldiers captured the city of Wilmington. Union officers commandeered this house and used it as their headquarters during the occupation of the city.

The outdoor section view of the Bellamy Mansion after it had been restored. 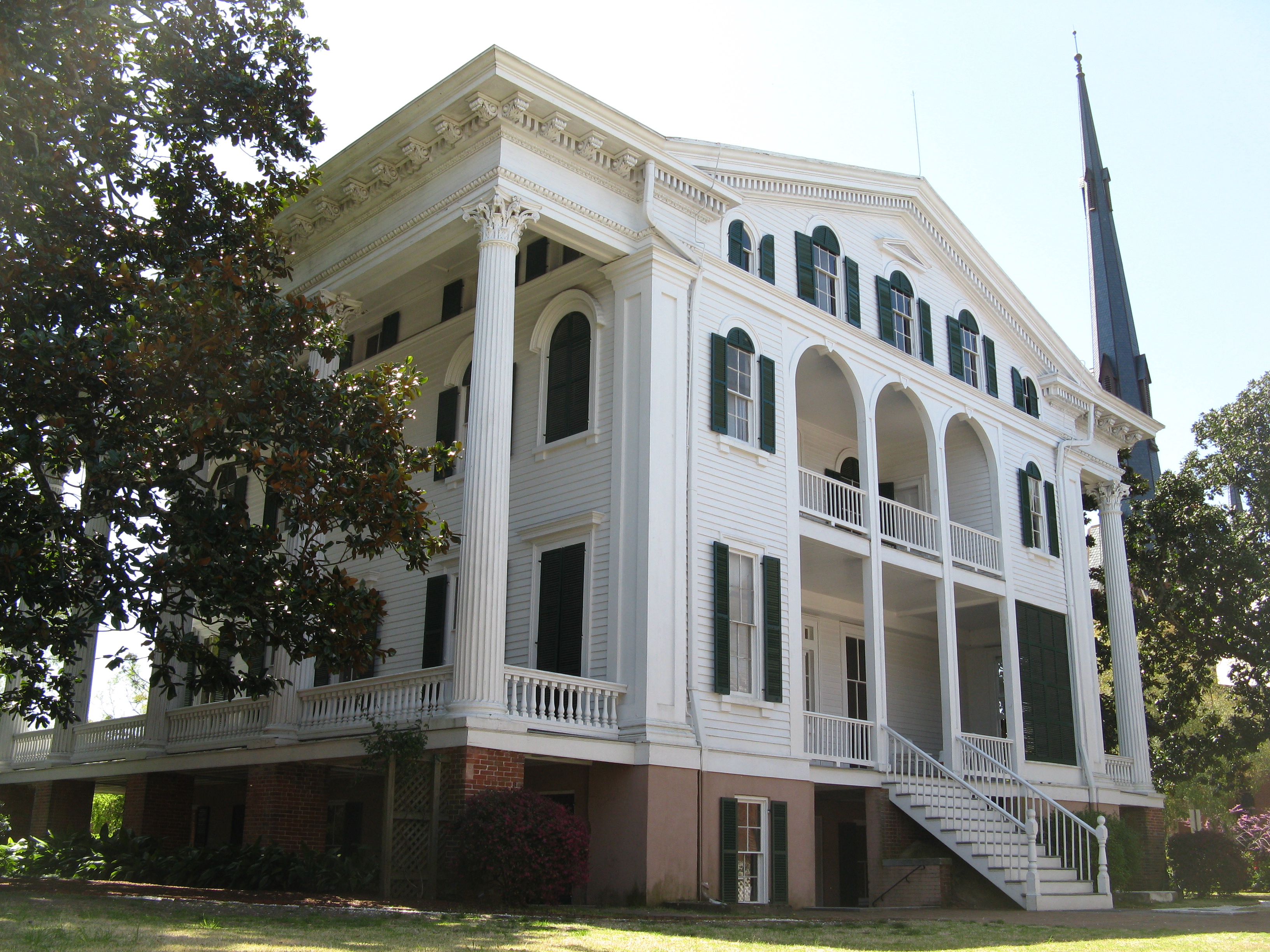 The story of the Bellamy Mansion is one of the most poignant and interesting in the area. For over 150 years, the house has been the site of the two architects who built it, many slave laborers, and many people who have shaped and carved the story of Wilmington, North Carolina.

The twenty-two room Bellamy Mansion was designed with Greek revival and Italianate styling. The mansion was constructed by enslaved skilled carpenters, as well as local freed Black artisans.  James F. Post, an architect from Wilmington, North Carolina was hired in 1859 to build the mansion. In May 1859, Post hired Rufus Bunnell to be his assistant architect.

It is not clear where the style for an elaborate structure came from, however, it is believed Belle, the first of the Bellamy children may have come up with the idea. Belle studied in South Carolina, where she took a liking to a home nearby that may have inspired the homes design. She shared her ideas with Dr. Bellamy and then with Bunnell. Excavation of the site and the foundation was laid in October 1859.

Many of the supplies to build the home were ordered from New York. The property also consisted of slave quarters and a small carriage house. The plaster moldings of the interior of the main house and extensive woodwork throughout the home were completed by William B. Gould and other slaves and artisans.

Although he wanted the mansion to be constructed in a classic style with an old reliable fashion, Dr. Bellamy was also interested in modern utilities and innovations. He believed these would allow his family to live in comfort. Therefore, although they were uncommon, the house was equipped with many features that were not seen in mass production at the time. These features allowed the home to stand out from other constructions in Wilmington during this time period.

Some modern features included a specially designed ventilation system helped to keep the mansion a comfortable temperature, luxurious wood, iron and metal works, stylish rugs, furniture and décor. With such a large number of people living in the mansion, Dr. Bellamy needed the home to be both modern and comforting.

When the last of the Bellamy's passed away in 1946, the home quickly fell into disrepair and was thought to be demolished to make room for more modern houses. Unwilling to let that happen, the grandchildren of the original family hired a caretaker in 1953, and the remaining family members tried to stay on top of the home.
As the area lost more and more of its historical homes, the home became even more important to the family:

Wilmington, like many other places across the South, saw decay in urban areas and lost many of its historic buildings downtown. In the early 1970s, Emma and Lillian, the two owners, along with their cousin Hugh MacRae II, decided the best way to preserve the house would be to create a charitable corporate, called Bellamy Mansion, Inc. About six years after the creation of the Historic Wilmington Foundation in 1966, owners Emma and Lillian donated their interests to the organization, and it was officially incorporated by the three cousins in February of 1972. Unfortunately, arsonists would soon set the home on fire and destroy most of the interior.

It took nearly twenty years, but the rest of the house was preserved and restored to its original beauty.Another great-grandchild of John D. and Eliza Bellamy, Robert R. Bellamy II, donated money to purchase the adjoining lot (the site of a house that burned down in 1980) to create parking for the mansion. All the while, fundraising efforts continued for the interior restoration.
In 1989-90, the foundation made the decision to share the mansion with the public, and donated the property to Preservation North Carolina. With the transfer complete in 1993, the Bellamy Mansion became a stewardship property of PNC. By donating the property, they expanded the impact that the property would have, and significantly increased the audience that would be able to enjoy the mansion. While Miss Ellen frequently allowed visitors into her home, the vast majority of the mansion had been closed to the public for close to forty-five years.

In 1994, the house was opened as the Bellamy Mansion Museum of History and Design Arts, and today its story continues to unfold. The carriage house has been reconstructed and functions as a visitor center. Lectures and workshops are held throughout the year, and changing exhibits, along with the daily interpretation of the house tell the stories that make this special place unique.