Old Fort Western is New England's oldest standing wooden fort. Benedict Arnold used the Fortsite as a staging point for his attack on Quebec during the Revolutionary War. 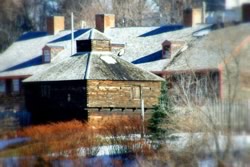 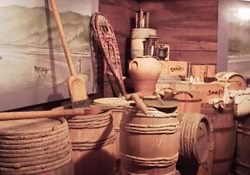 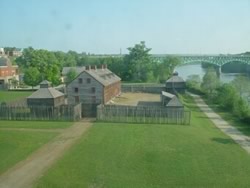 Built in 1754, Old Fort Western is the oldest surviving wooden fort in America.  The Fort was built by Kennebec Proprietors along with the Province of Massachusetts with the interest of expanding their influence into the area and help Britain take political control over North America.  They also wanted to sever the ties between the Abenaki and the French in Canada.

The Fort was used as a fortified stotehouse for Fort Halifax.  Fort Western would send supplies north to Halifax as many as four times a year.  Fort Western was never attacked directly; however, there were many garrison members who were fired upon as they attempted to take supplies to, and return from Fort Halifax.

Many of the garrison members spent most of their time doing everyday duties such as boat repair, cooking, getting wood, baking, along with helping to re-supply Fort Halifax.

Although hostilities came to an end on the Kennebec River in 1760, Fort Western's garrison stayed on station to help maintain an English presence on the river until 1767.  Capitan James Howard arranged to acquire the Fort and it's buildings once the garrison was discharged.

During the Revolutionary War, Benedict Arnold used Fort Western as a staging point for his attack on Quebec.  He and his men stayed in the area for a week or more.  Some of his officers stayed in the Fort's main house.  However, after 1767, there were no soldiers stationed at Fort Western.  The Fort would eventually become a civilian store and private residence.