Catlettsburg National Bank was constructed in 1885 and demolished in 2014. 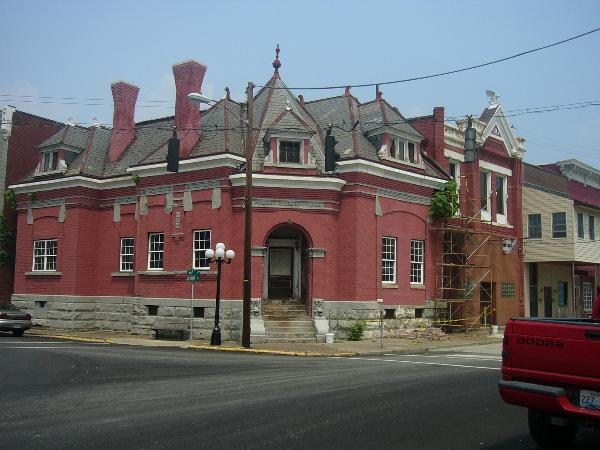 Founded in 1885, the Catlettsburg National Bank would stand as one of the largest, most successful banking institutions for Catlettsburg. Located in downtown Catlettsburg, the late Victorian building would handle up to a million dollars a day during its height in 1900. During the thirty-five years of active operation, they printed almost one million dollars’ worth of national currency. This would set a precedent in the Ashland area and demonstrate the economic vitality of the bank. The money for the bank was a result of the booming steel and coal industries of the Tri-State area. Catlettsburg and Ashland were stops on the river for barges that passed through the area.

During production, the bank produced paper bills in the 1875 ten dollar and twenty dollar notes. It printed upwards of six thousand notes for both the ten dollar bills and twenty dollar notes. It also printed the 1902 series of notes for the five, ten, and twenty dollar notes, which included the red seal and blue seal series. In this series, the bank produced anywhere from two thousand to ten thousand notes for each set. These banknotes are significant because they denote the national push to print paper currency. Any bank that nationalized was able to print paper currency, and when they did, it was indicated in their charters. These charters are further broken down by color and date, such as the 1875 series, which was the first charter, and the 1902 series, which was the third charter.

By 1916, the bank's economic power was declining, and it was eventually sold to Farmers and Merchants Bank. The grand building would later be used for office space until it was completely abandoned. By 2011 the building was in severe disrepair, the city stating that the ceiling was slowly caving in and the exterior walls collapsing. In 2012, the bank building received its condemned status. The Kentucky Trust for Historic Preservation attempted to delay the demolition of the building, but the structural damage was too extensive to attempt to repair. The building was finally demolished in 2014 after a corner of the bank collapsed.