Tower of the Americas and HemisFair Park

HemisFair Park was the original location of the world fair of 1968 in which San Antonio celebrated its 250th anniversary since its founding. The plans for the fair involved a large sum of money and incorporated "old-city" structures as well as state of the art constructions such as the Tower of the Americas. The fair's theme focused on the cultural exchange between the United States and Latin America as well as celebrated San Antonio's specific role as a center of international economic and social commerce. Today, the park features pristine landscaped grounds, historic buildings, playgrounds, the Institute of Texan Cultures, the Instituto Cultural Mexicano, and the original Tower of the Americas, which houses a restaurant and 4D amusement ride. 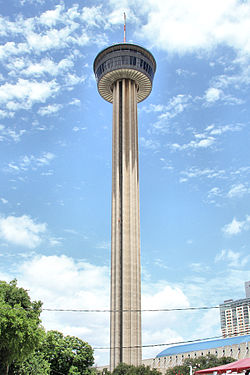 HemisFair Park was the original location of HemisFair '68, which was a world fair that the City of San Antonio hosted in celebration of its 250th birthday. The idea for the fair began with an influential town merchant named Jerome K. Harris who spurred individuals within the local business community to come up with a way to honor the San Antonio culture. Congressman Henry B. Gonzales approved of the plans for a heritage fair, and in 1962, San Antonio Fair, Inc. was formed in order to execute the plans.

While the plans for the urban park were supported by the majority of city dwellers, there were some concerned about historical structures that stood on the over 92 acres of land that was to be used for the construction of the park. Head architect O'Neil Ford and site-development director Allison Perry devised plans in which 120 of the original site structures could be used as a part of the grounds. However, in 1966, Ford was let go by the executive committee and Allison Peery took on his role; there is speculations that this move was due to "the committee's reluctance to go along with [Ford's] plan to save 120 historic structures on the site." In order to get federal monetary support, however, the committee was required to save as many of the historic structures as possible as outlined by an amendment proposed by Senator Ralph Yarborough; only 22 structures were saved.

Although many of the "old-city" buildings were demolished, the newly built structures were breathtaking. One of the most awe-inspiring of these was the Tower of the Americas, which stood 622-feet high and represented the theme of the fair: "Confluence of Civilizations in the Americas." According to the Texas State Historical Association, "Construction of the tower was noteworthy because of the method employed; the 1.4-million-pound tophouse, containing observation decks and a restaurant, was built on the ground and then moved to the top, inch by inch, with twenty-four steel lifting rods. The process took twenty days." The tower is still a part of the park today, as well as the River Walk and the Convention Center complex. The two-building complex, which also contained a huge circular theater and was the structure devoted to the United States's exhibit during the fair was converted into the Federal Courthouse.

For the six months it ran, the fair represented over 30 nations and celebrated the cultural exchange between America and Latin America. Countries that had pavilions at the fair included: Canada, Mexico, Italy, Spain, France, Japan, Belgium, Bolivia, the Republic of China, Colombia, West Germany-Berlin, Korea, Panama, Portugal, Switzerland, Thailand, Venezuela, Nicaragua, Honduras, Guatemala, El Salvador, Costa Rica,  Brazil, Argentina, and Peru. According to the Texas State Historical Association, "The largest pavilion, that of the state of Texas, was called the Institute of Texan Cultures, and mounted displays of many of the ethnic and national groups that formed modern Texas."