The Wickenburg Massacre took place on November 5, 1871, where the murder of six stagecoach passengers en route from Wickenburg, Arizona Territory, westbound for San Bernardino, California, on the La Paz road occurred. The Massacre is considered to be Arizona's Greatest Mystery. This location is for the Wickenburg Massacre monument located near the vicinity of the actual massacre site. Directions to the location of the massacre site are provided below.

Frederick Wadsworth Loring. This photo was taken two days before his death at the massacre site. 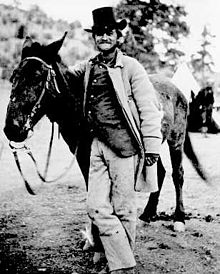 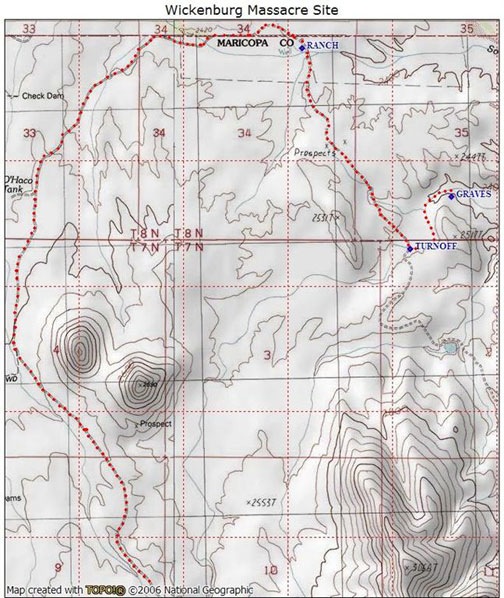 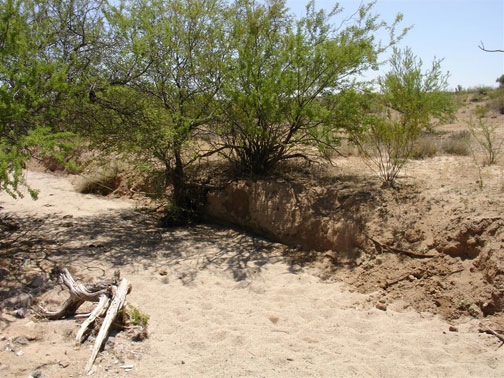 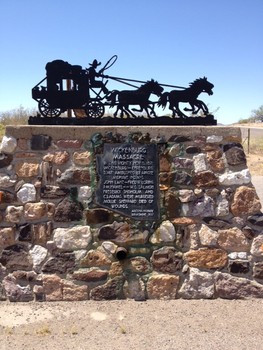 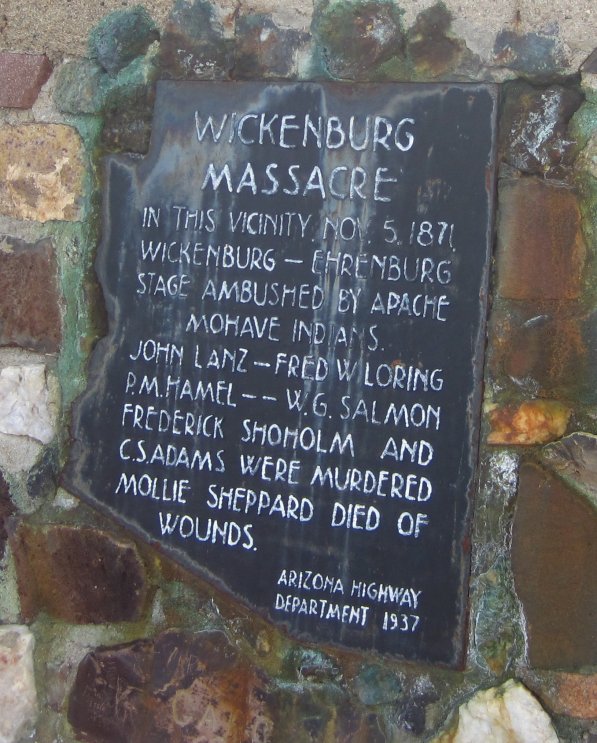 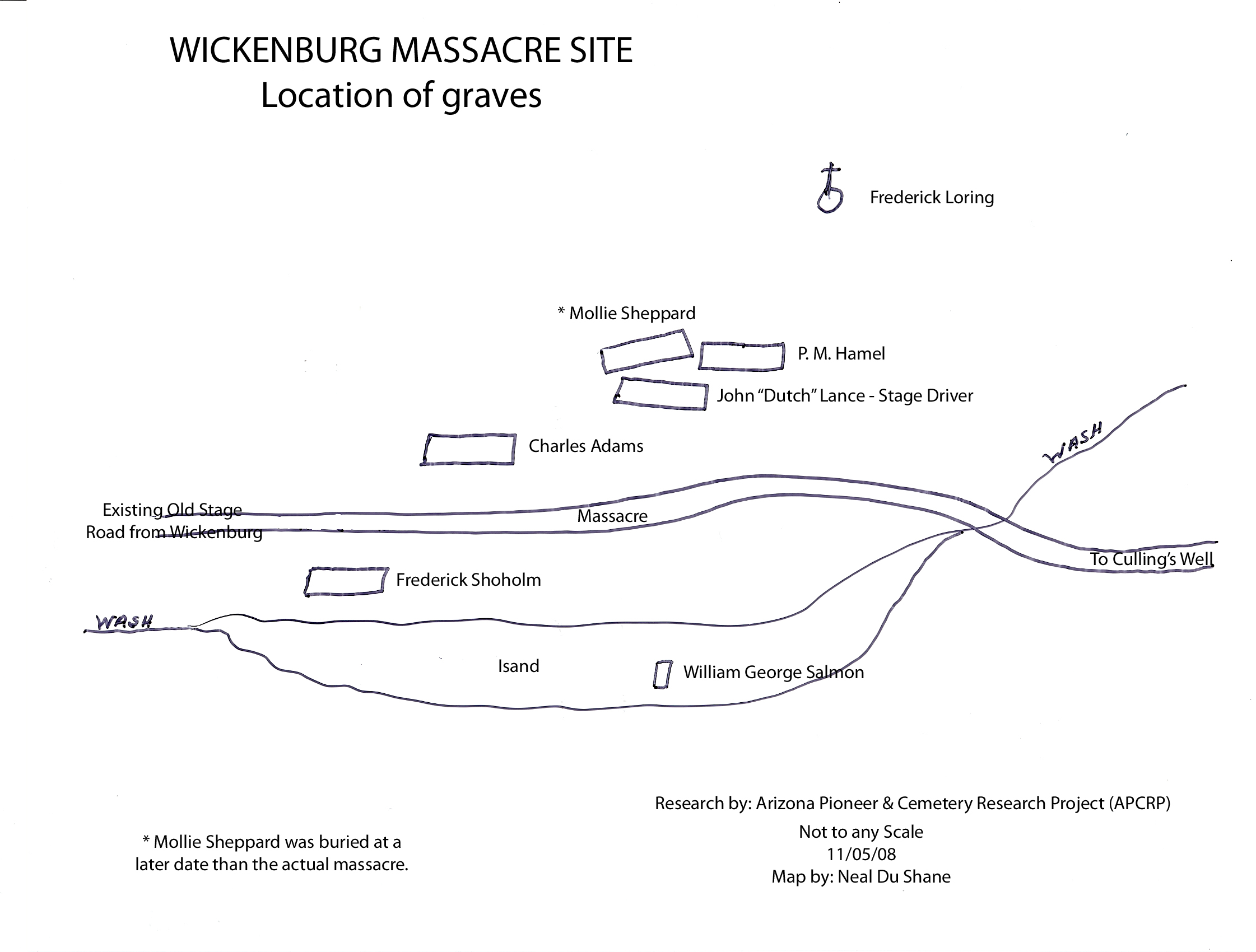 Some of the graves today

In mid-morning, about six miles from Wickenburg, the stagecoach was attacked by fifteen Yavapai warriors, who were sometimes mistakenly called Apache-Mohaves, from the Date Creek Reservation. Six men, including the driver, were shot and killed. Among them Frederick Wadsworth Loring, a young writer from Boston. One male passenger and the only female passenger escaped, though wounded.

Over the next two years General George Crook conducted an investigation into the attack, and finally identified all the participants. He tried to arrest the ringleaders, but failing, sent Captain J. W. Mason to Burro Creek, where he encountered both guilty and innocent natives in three rancherias. Many were killed in the battle that followed.

Seven months prior to the Wickenburg incident, 144 Apaches were killed in the Camp Grant Massacre near Tucson, and Eastern sentiment was with the victims, but the death of one of Boston's most promising young writers at Wickenburg turned the tide against the Yavapai. In February 1875, after being promised reservation land near Prescott "forever and forever," the Yavapai tribe was uprooted and driven 180 miles south to the San Carlos reservation, where they were forced to live beside their enemies from centuries past, the Chiricahua Apaches.

"At approximately 8:00 a.m. on the morning of November 5th, 1871, a stagecoach carrying seven passengers and driver was ambushed eight miles west of Wickenburg while en- route to Culling’s Well, Ehrenburg and San Bernardino. This event, which led to the death of seven people, quickly became the center of national attention. The driver and five male passengers were either killed instantly or died within minutes of the attack. Two wounded passengers (William Kruger and Mollie Sheppard) made a harrowing escape and were picked up by an eastbound mail wagon approximately five miles west of the ambush site after being pursued by nine members of the ambush party. Mollie Sheppard died from infected wounds some time after January 11, 1872. Of the eight souls involved in the ambush, only William Kruger survived.

Evidence, (some of which was circumstantial and conflicted), eventually led the Territorial Army to attribute the attack to a band of 'Apache-Mohave' Indians from the Date Creek Reservation. This group, which would actually have been members of the Yavapai tribe, numbered at least thirteen; but may have been comprised of thirty or more. Yet, although the attack and its aftermath were investigated and heavily reported, many of the details pertaining to the incident are an enduring mystery. Many of the news articles were misinformed or speculative and were written by people who had no direct connection with the events of November 5th; but which served to inflame public sentiment against Native Americans.

Based upon a letter that Kruger wrote to Loring’s family, five of the men who died at the scene were reportedly buried in Wickenburg on November 6th, three hours after a hastily called inquest. The sixth man, William Salmon, was not discovered until the morning of the 6th and was reportedly buried in a '“deep cut in the hillside.”' Later reports claim that his remains were exhumed from the hillside and laid next to the other five men several weeks or months later. For unexplained reasons, the local graves of these men were reportedly “disturbed” in 1949 and then disappeared from local records.

The original location of their presumed graves in Wickenburg is a matter of some conjecture, but would likely have been either the Stone Park Cemetery or the so-called “Lumber Yard” Cemetery next to the present location of the Wickenburg Sun — since no other cemeteries were known to exist at that time. In the years that followed, the remains were said to have been exhumed and reinterred at least twice to new locations. The last re-interment may have returned the remains to the original site of the ambush — at least according to legend. Unfortunately, any records that could explain the reasons for moving these burials from the original cemetery are now lost in time.

The “Wickenburg Massacre” has long been a cornerstone in the history and legend of our town, yet very few people know where the ambush actually occurred.

The rock pile with the wood cross is believed to be the grave of Frederick Loring, who was riding on top of the stage coach with the driver, “Dutch” John Lance, and another passenger, Charles Adams. There are additional graves to the left, uphill beyond the cross. The most distant grave from “Loring’s cross” is roughly 120 feet to the northeast and may belong to William Salmon. Records clearly indicate that he was killed very near to that location. He may have been buried (or re-interred) at this spot.

The problem is — there are too many graves. No less than ten graves have been identified, but six men were killed at the scene, reportedly taken from the site, and buried in Wickenburg. Although Mollie Sheppard eventually died from her wounds, she was last known to be in San Francisco with Kruger on January 11th, 1872, more than nine weeks after the ambush. The circumstances and date of her subsequent death were not recorded and she had no family connections in the U.S. Kruger apparently did not report her death until twenty-nine months after her passing, but never provided any verifiable details.

To compound the problem, there are six to eight additional graves located south- southeast of this site at a distance ranging from fifty to 150 yards. Without proper context, this is an exceedingly unusual location for eighteen graves. There is no physical evidence that a settlement was ever established here before or after the ambush. Stage coach and freight wagon robberies, which occurred with depressing regularity during the gold rush days, may account for some or all of these surplus graves. However, there are no known records that establish killings other than the November 5th ambush.

There is a second problem with the view in Figure 3. This site is indeed located next to a hillside, but the eastern slope of the hill is very gentle at this point and (assuming no significant changes in vegetation since 1871) would have offered no concealment for a large group intent on an ambush. Newspaper reports and testimony suggested the ambush occurred at a distance as short as six to fifteen feet. That is virtually point blank range for Henry and Spencer rifles. Even with improvised cover, I have great difficulty accepting that thirteen (and especially thirty) members of an ambush party could have concealed themselves at this location without being noticed before the final moment. It is possible, perhaps even likely, that the ambush occurred twenty to thirty yards west of “Loring’s cross” where the hillside is more steep and closer to the stage coach trail.

A Mystery Wrapped Inside an Enigma?

There is no doubt that this site was established as the massacre memorial by earlier generations of Wickenburg residents. Furthermore, the route, distance, the hillside and wash match the descriptions provided in historical accounts to within a distance of thirty yards. That is a trivial discrepancy and only acquires hypothetical significance when you examine the hillside and wash from a higher elevation.

Within a radius of forty feet from “Loring’s cross” there are clearly distinguishable graves — some with rock mounds, others with easily identifiable rock outlines. There is also a grave very near the spot where Salmon was reportedly killed. They all appear to be randomly placed. In other words, there is no apparent organization; there are no neat rows or alignment. It is, in fact, a chaotic burial site. And there lies the rub.

If the six male victims were first buried (side by side) in a Wickenburg cemetery and then eventually reinterred at the massacre site after a passage of 78 years, why would these present graves have the appearance of random placement? Why would Salmon, the sixth victim, now be buried 120 feet from the location of Loring and the others if he was previously buried next to them in a Wickenburg cemetery?

Without further evidence I can provide no concrete answers and I am unwilling to yield to simple speculation. I hope there are still long time residents among us who have first hand knowledge (or verifiable documentation) that can shed more light on these graves, as well as the circumstances surrounding the reported “disturbance” of the Wickenburg graves in 1949.

The Wickenburg Massacre was an important event, both at the national and territorial levels in 1871. The ambush may have been motivated by a desire for vengeance against earlier killings of Indians by Arizona settlers; however, it dramatically changed popular attitudes about Native Americans and greatly influenced federal and army policy in their relentless pursuit and containment. What were once described as 'noble red men' were now characterized as murderous, marauding savages by the Eastern press corps.

Between September, 1872 and March, 1873 more than 120 Yavapai were killed in army campaigns. The Yavapai tribes surrendered in April, 1873 and were forced off their ancestral lands during the winter of 1875. 1,426 Indians (a mixture of Tonto Apache, Yavapai and Hualapai, were marched to the San Carlos Reservation, but 105 died along the way. When you visit the Wickenburg Massacre, you might do well to think about the full context of this site — what transpired here, and what followed afterward.

Many local residents of the time believed the attack was carried out by Anglo or Mexicans bandits and not Yavapai Indians. Local descendants of that era grew up with an understanding that the victims were buried where they died and were never transported to Wickenburg. These strongly held beliefs persist to the present time.

If you are interested in the history and legend of Wickenburg, — particularly if you are interested in preservation — then you should visit the massacre site. By any standard of definition it qualifies as a derelict pioneer cemetery. It is not maintained. The only thing that protects it today is its location and obscurity. It is, however, on State Trust Land; which means that the area will eventually be sold to the highest bidder for future development. It is my firm belief that when we become informed citizens, when we know and understand the heritage of our land, we will be motivated to protect and care for it."

DIRECTIONS TO MASSACRE SITE (As provided by a Wickenburg AZ website):

Getting to the massacre site is not particularly difficult, but it does require a bit of patience.

The turnoff point is six miles west of the intersection of Vulture Mine Road on US-60. This is west of mile marker 102. The turnoff is not marked and can easily be missed.

Exit from the highway to your right onto a dirt road. It will lead you to a gate with a sign that says you are entering State Trust land. The sign also states that a valid lease or permit is required for entry. This basically means (1) you are grazing cattle on leased land or (2) that you have a valid hunting license or some other type of permit. Use your own judgment about entering this area without a permit.

The distance from US-60 to the massacre site is 6.6 miles along an unimproved dirt road.

High-clearance vehicles are required and 4WD is definitely recommended. There are numerous erosion channels that cross-cut the dirt road between US-60 and the old ranch house. After turning into the wash, you will be in deep sand the remainder of the way.

Finally, stay on the trails — there are no shortcuts. And… pack out your litter.