The Moonville Tunnel was part of the Marietta and Cincinnati Railroad's line that ran across the Southern portion of Ohio. The railroad brought increased commerce and travel to the region, and many small communities sprang up along the line. One of these communities was the town of Moonville, located along Raccoon Creek in Vinton County, in the most densely wooded area in Ohio. The town was named after Mr. Moon who operated the town store. The town began its decline in the 1880s and closed its coal mines in the early 1900s. The last family moved from Moonville in 1947. Today, all that remains of the town is the cemetery and the train tunnel. 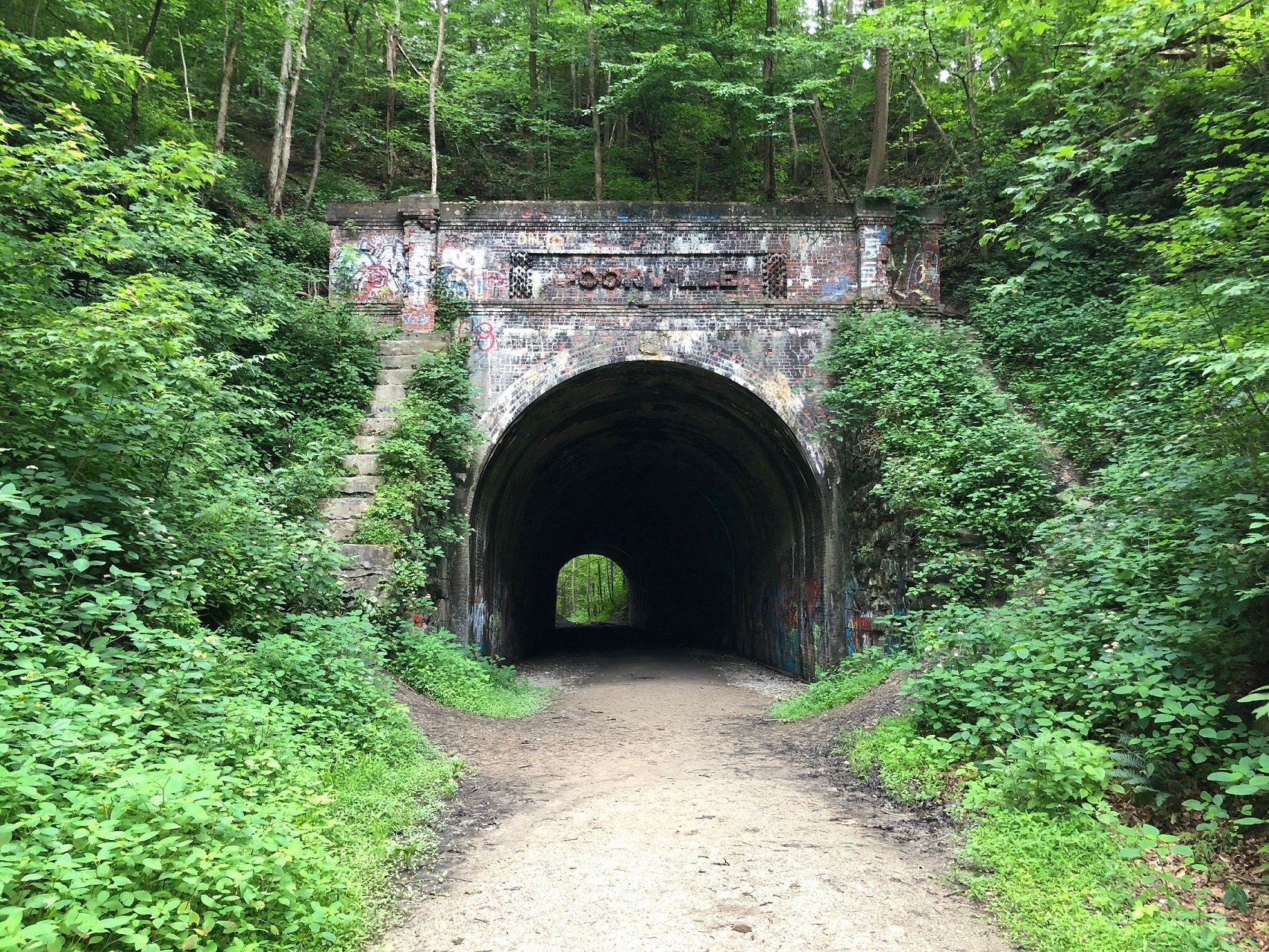 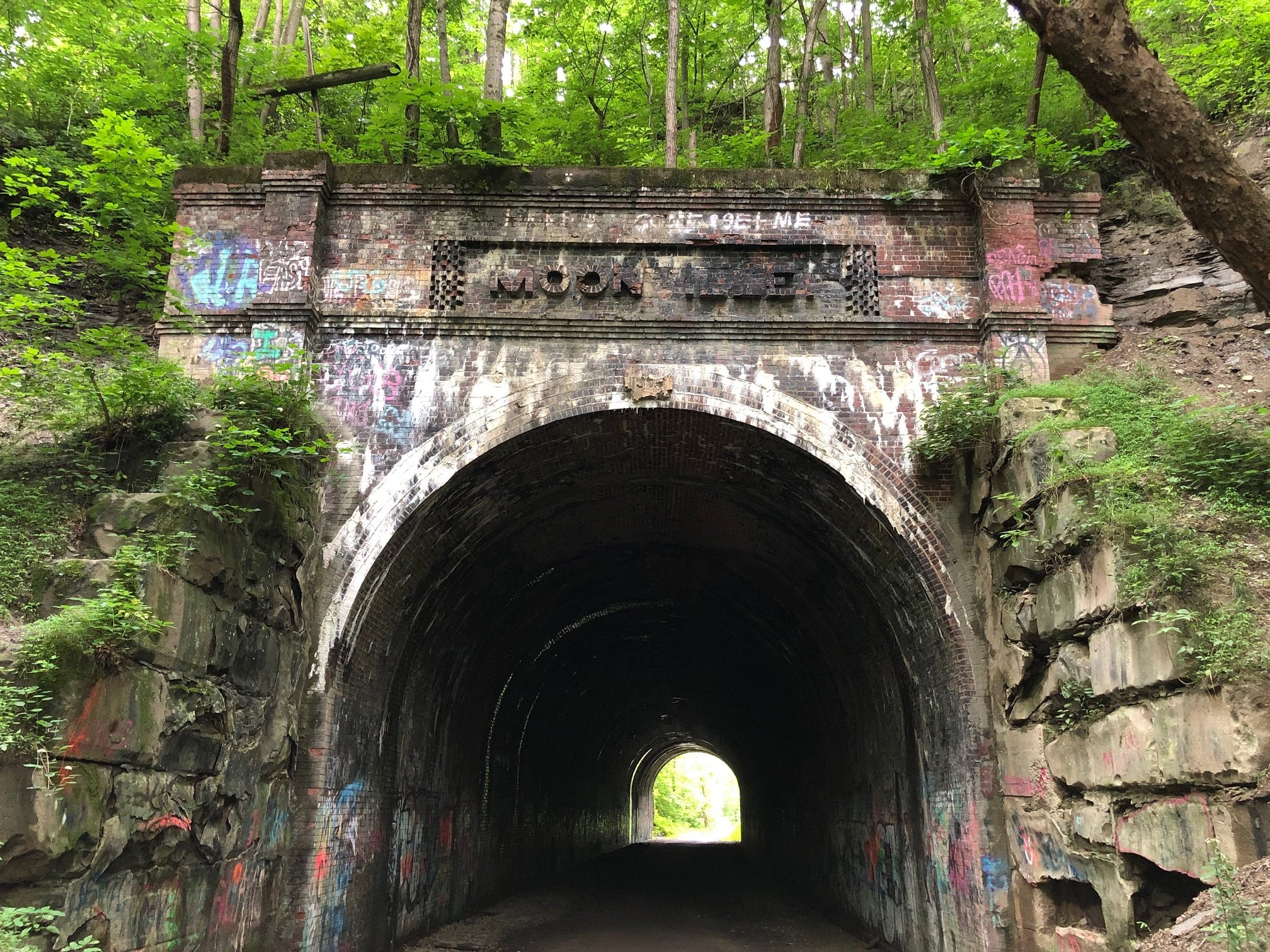 Western portal of the Moonville Tunnel is the early 1900s. Source of photo unknown. 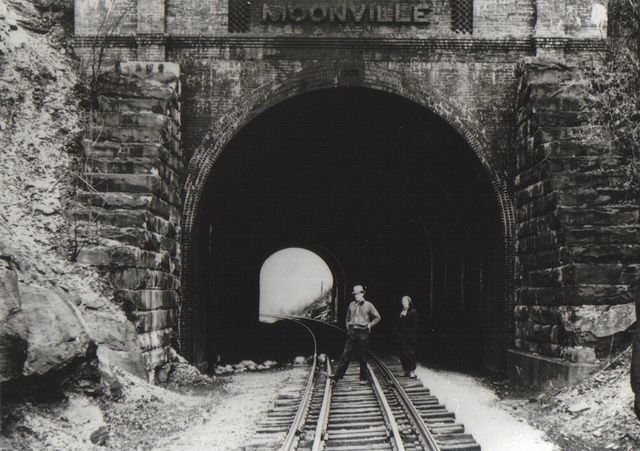 In 1856, the Marietta and Cincinnati Railroad was scouting locations to run their rail line in Southeastern Ohio. Local land owner Samuel Coe offered the Marietta and Cincinnati a large piece of land for free if the company would run a portion of the rail line through his property, which would allow him to transport coal and clay mined on his land. Knowing that the route through Coe’s land would reduce the distance to Cincinnati, the company agreed.

Incorporated in 1845, the Marietta and Cincinnati Railroad began constructing a line from Marietta through Southeastern Ohio in the 1850s with the goal of reaching Cincinnati. The railroad's founders envisioned a line that would carry passengers and freight across the lower portion of Ohio, as well as connect to the Baltimore and Ohio and larger railroads to the east. The Appalachian Foothills posed a challenge to early railroad engineers, who were forced to design and construct many tunnels, trestles, and culverts in order to maintain the railroads grade. Despite financial setbacks, the Marietta and Cincinnati eventually connected the two cities by railroad; the first train ran in 1857.

Many towns sprouted up along the Marietta and Cincinnati's route. On Coe's land the small coal mining town of Moonville emerged. Coal from Moonville helped supply fuel for furnaces in the area. The town was named after Mr. Moon who operated the town store. In the 1870s, Moonville reached its peak; there were only a little over 100 people living in the town at the time.

The Baltimore and Ohio Railroad purchased the Marietta and Cincinnati's line in the 1880s causing rail traffic to increase. However, the increase in traffic did not help the town. As rail traffic increased, the town's population actually declined. Then, as resources diminished and industry moved elsewhere, coal mines began closing in the early 1900s. The last family moved from Moonville in 1947. By the 1960s, all the buildings that were once in the town had been demolished.

In 1988, CSX, which had purchased the Baltimore and Ohio and the subsequent Chesapeake and Ohio, abandoned the railroad. Tracks running from Belpre to Cincinnati were pulled up in favor of a route that followed the Ohio River. The tunnel and town cemetery are all that remain of Moonville today. Currently the former rail line is used for hiking and horse riding, and there are plans to create a paved bike path known as the "Moonville Rail Trail" on the former rail bed that would connect to the Athens Bike Path.