This 1904 artillery placement at the Presidio in San Francisco was activated during both World Wars, though never fired at an enemy. The guns currently located at the battery are operational and demonstrations are performed annually.

Battery Chamberlain without the gun 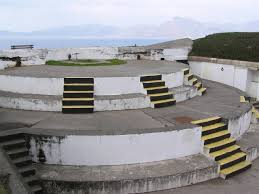 NPS guide with the 50-ton gun atop Chamberlin today 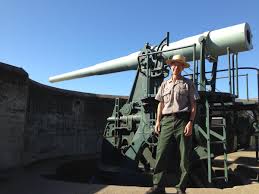 Company D at Battery Chamberlin in 1942 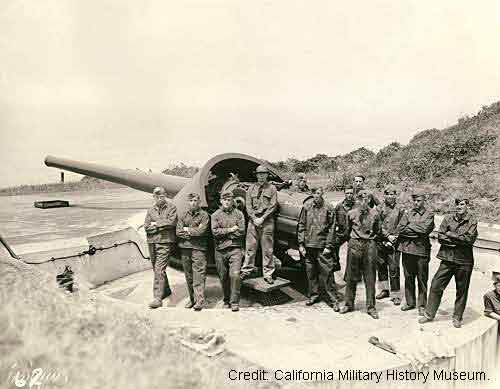 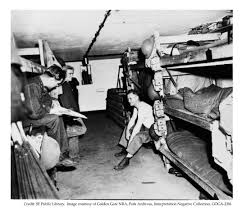 Constructed in 1904, this battery was used to guard San Francisco by attacks from the sea and was named in honor of the Civil War officer, Captain Lowell A. Chamberlin. The battery was to also be a part of a new system of coastal defense of US ports designed by Secretary of War, William C. Endicott.

With the creation of ironclad ships and rifled cannons causing brick fortifications to become obsolete, this 'disappearing carriage' swivel gun was the last battery established while Endicott was in office.  This new rifled cannon had a range of 8 miles and the shells could cause serious damage to ironclad ships. Also protected by Battery Chamberlin and other costal batteries along San Francisco harbor were the costal minefields and the Golden Gate Bridge.

After WW1, new and improved gun replaced Chamberlin's original guns. By 1929, a new battery that had 16" guns and with a range of 25 miles (an accurate to boot) were placed in Chamberlin. After the attack on Pearl Harbor in 1941, the west coast was placed on high alert from other possible attacks from the Japanese. The Sixth Coast Artillery, in charge of San Francisco and other nearby coastal areas, manned the batteries, with Company D in charge of Chamberlin. A mess hall, a modern barracks, and bunker and renovated magazine for the ammunition were completed during the WW2.

The use of air power and amphibious attacks made Battery Chamberlin obsolete by 1948. The Coast Artillery Corps was deactivated in 1948. The batteries were disarmed and the guns scraped during Operation Blowtorch as the nation geared up for the new age of air and missile defense and nuclear brinkmanship during the Cold War.

Today, a 50-ton rifle is the only gun on Battery Chamberlin and demonstrations are held to show how coastal defense would have looked like in the early to mid 20th century.