Craven's House is a historical home that sits on top of Lookout Mountain. In 1838, Robert Craven and his family moved to the Chattanooga area. Craven purchased one thousand acres of land across Lookout Mountain in order to grow cotton, the best selling crop during the period. During the Civil War, Craven's House became a lookout point and a headquarters. On November 24th, 1863 the "Battle Above the Clouds" took place on the Craven estate with the Union Soldiers taking control of the area. Soon after, the house was burned down under Union watch. The house was rebuilt by Craven after the war and eventually donated the home and land to the Chattanooga National Park in 1893. The home underwent renovation in 1956 and the home can now be visited by appointment.

A modern view of Craven's House 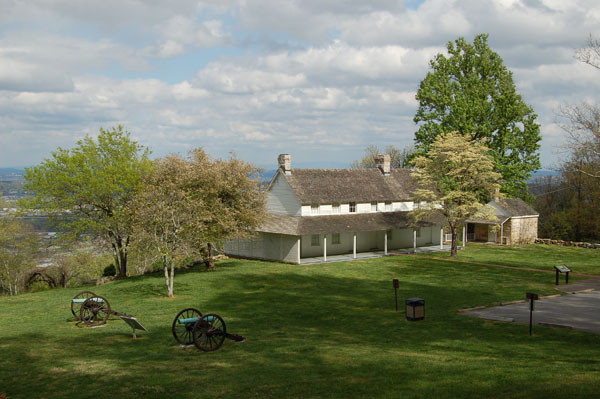 Soon after Chattanooga was an incorporated city, Robert Craven moved his family and industry to the area. Craven was a well known businessman during the period. He purchased 1,000 acres of land on top of Lookout Mountain in order to grow cotton. Cotton did not remain a profitable crop for long, but Craven was able to move forward with new crops and eventually the manufacturing of iron.

Craven began his trade in the area in 1838. Soon after, the Civil War began. Craven's House served as a valuable lookout point during the period because it was situated on a mountain top. The home was used as a Confederate Headquarters.

The land of Craven's House is historically significant because it is where the "Battle Above the Clouds" took place on November, 24th 1863. The Union Army was able to quickly take control of the house. Soon after, 10,000 Union soldiers advanced to Craven's house only be to met by 1,200 Confederates. The home remained unscathed during the battle but the Union soldiers would later burn it down during a drunken fight.

After the Civil War, Craven moved back to his land. He rebuilt his house and remained there until his death in 1886. In 1893, 83 acres of his land was donated to the Chattanooga National Park. The home underwent renovations in 1956 and can now be visited by appointment only.

Craven's House is now frequently seen from the outside by hikers. There are two trails on Craven's land: the Bluff Trail and Point Park to Sunset Rock. Both trails offer moderate hiking of over a mile.