A Spanish mission located in the Danish town of Solvang, Santa Ines is known as the "Hidden Gem of the Missions." One of the final missions to be built--and the last in Southern California--its construction was set back by the massive earthquake of 1812. An Indian revolt in 1824 burned much of the original mission to the ground, and the Mexican government's secularization of mission lands in 1834 nearly spelled the end for Santa Ines. The birth of California's first institution of higher learning at the mission, however, and an influx of Danish immigrants in the early 1900s saved the mission from decay, and today it serves as a renowned museum and parish for the Catholic Archdiocese of Los Angeles. 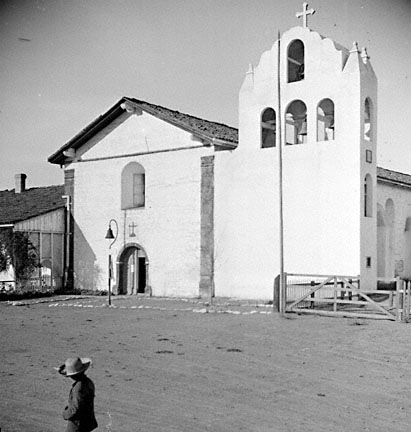 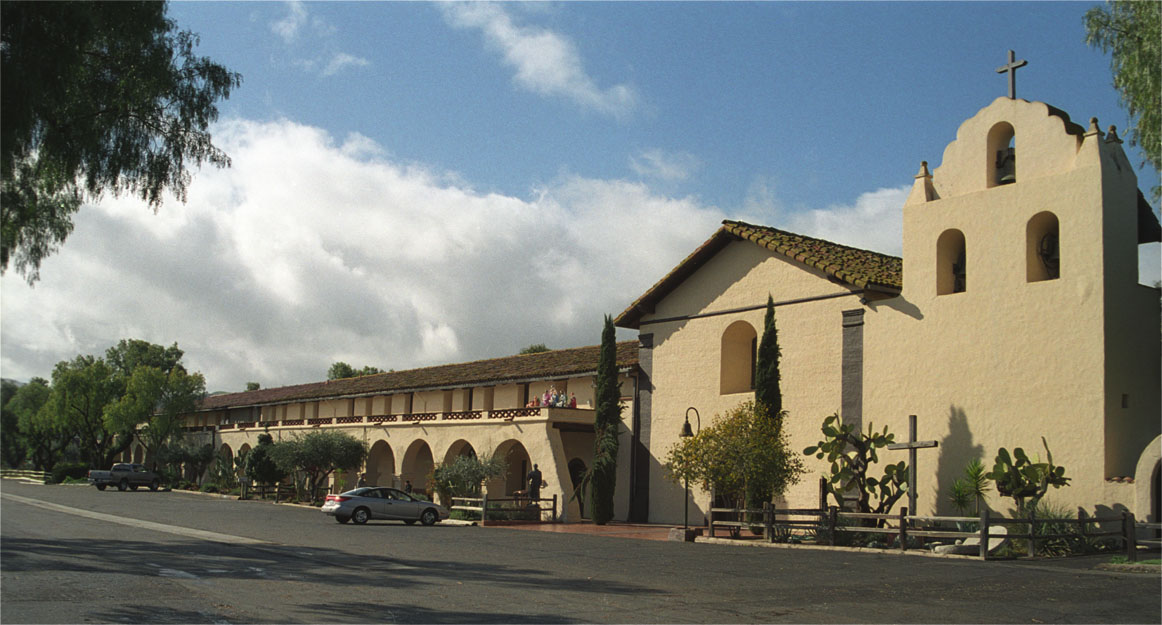 Edward Vischer's sketch of Santa Ines, circa 1865. Vischer was a German immigrant whose fascination with the California landscape birthed a rich collection of visuals depicting 19th Century California. 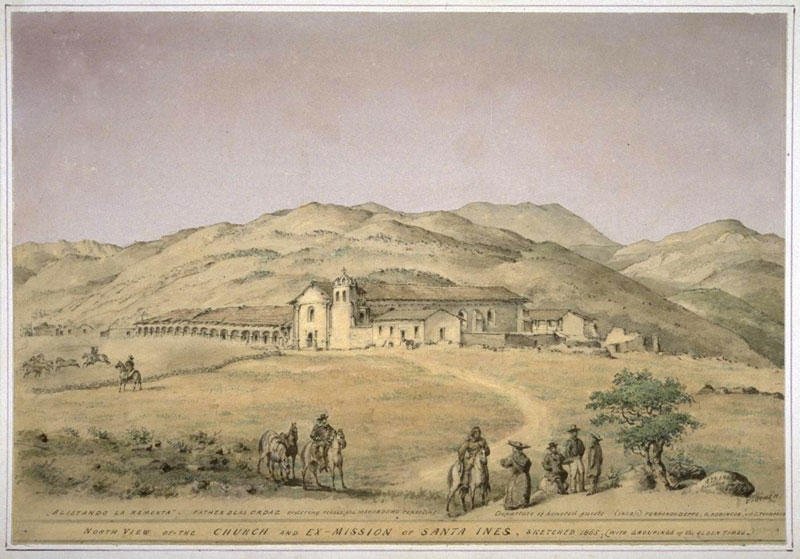 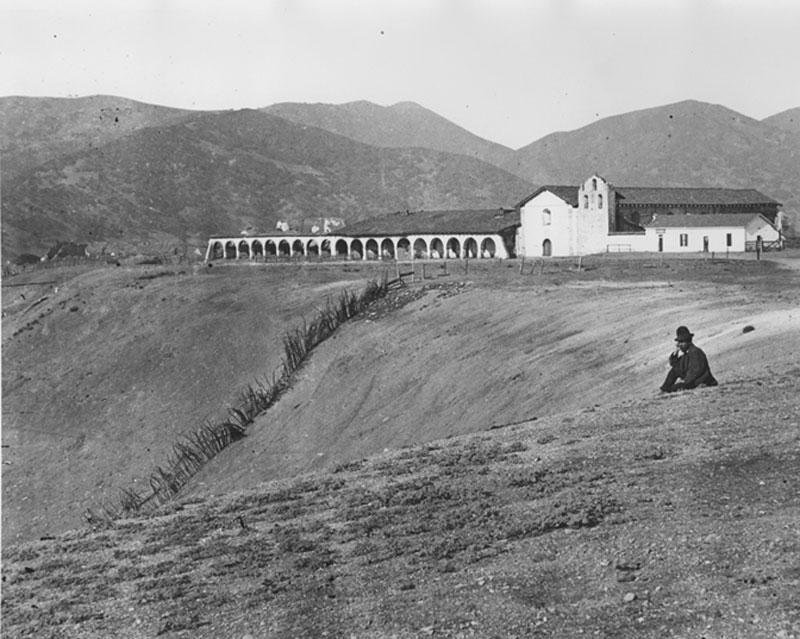 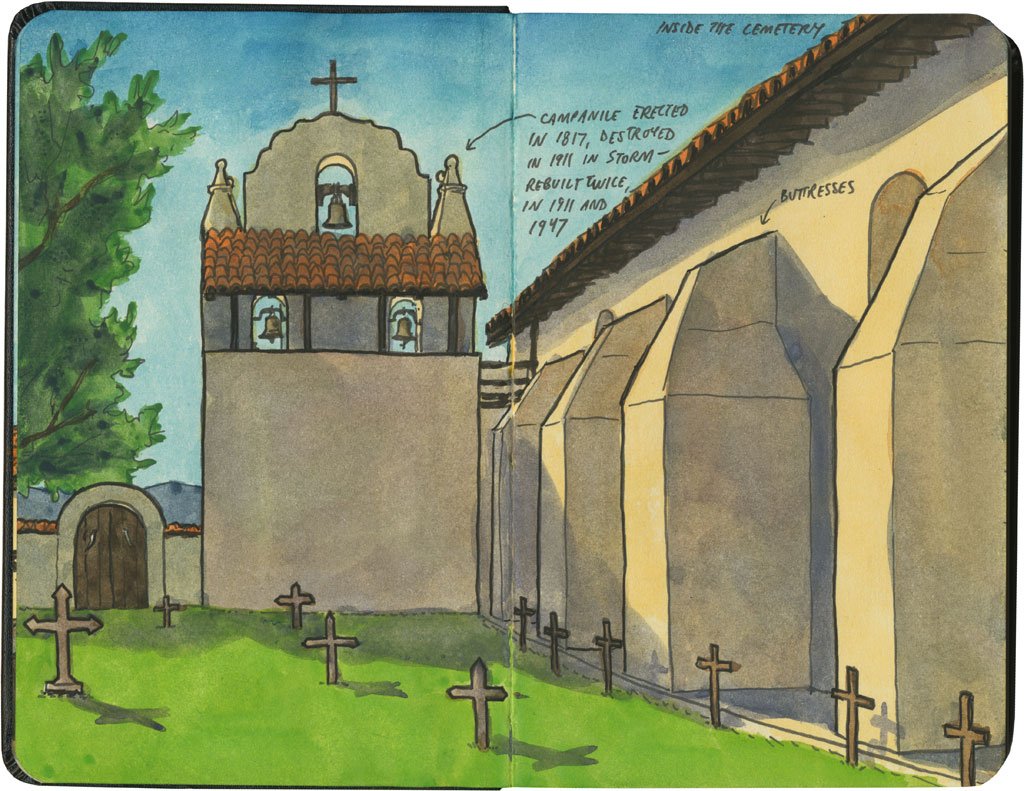 Interior of the church, much of which was reconstructed in the 20th century due to damage by fire during the Indian revolt in 1824 and decades of neglect. Courtesy of Lets Go See It. 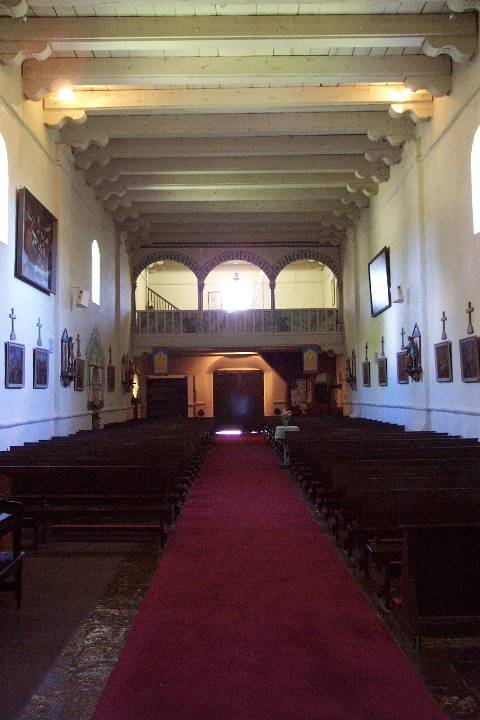 Joseph Chapman and wife Guadalupe. Married at Santa Ines in the 1820s, the Chapmans later moved to Los Angeles where Chapman became a prominent businessman involved in many important events in mid-1800s California. Phota ca. 1847. 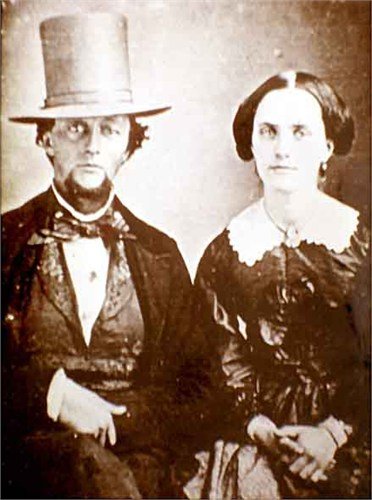 Founded in 1804, this mission would not be completed until 1817. Placed almost exactly in the center between the existing missions of Santa Barbara and La Purisima Concepcion, the Mission Santa Ines Virgen y Martir was conceived from the outset to accommodate overflow converts from her sister establishments. It was also intended as an advance “outpost” to buffer the two more prosperous missions from raids by Indian tribes to the northeast near Tulare Lake.

It took 13 years to complete the mission, largely due to the 1812 earthquake centered in Santa Barbara. Santa Ines was heavily damaged, along with many of the missions in the southern half of the state. The original church was destroyed and a number of additional buildings damaged. Rather than abandon the mission, the church, local Indians and immigrant Spaniards sought to rebuild and finished in 1817. At the time of its completion, Santa Ines was nineteenth of the twenty-one missions established by the Franciscan Order, and would only serve thirty years under her Franciscan founders before being confiscated. Ironically, Santa Ines’s population of Chumash Indian neophytes (converts) peaked before the mission’s construction was even complete, summiting at 768 in 1815.

The mission, however, continued to expand. In 1819 a grist mill was completed and in 1821, “immigrant” Joseph John Chapman built a fulling mill. The origins of Chapman’s arrival in California are murky, but he was most certainly a member (perhaps unwillingly) of Hippolyte De Bouchard’s pirate raids along the California coast in 1818. Chapman may have been captured by Spanish soldiers during a pirate sortie ashore near Mission San Buenaventura, and thus became one of the first Anglo-Americans in California. Pardoned by a general Spanish amnesty in 1821, Chapman later converted to Catholicism, built a fulling mill for processing cloth (no doubt producing clothing for the hundreds of mission neophytes) and married a Californio woman. He would later move to Los Angeles and build California’s first trading ship, the 90-ton Guadalupe (named after his wife).

Also at the new mission were 5 soldiers and their families and neophytes (Indians--Chumash, in the case of the Santa Barbara area--converted to Christianity) from Santa Barbara and La Purisima. The census of 1806 recorded 132 neophytes from Santa Barbara, 145 from La Purisima, 570 local Chumash, 4 white children (soldiers’ children). The Padres kept detailed records of baptisms, marriages and deaths. Many of these records are in the archives, with more stored at San Fernando Mission. The Franciscans, whose goal was colonize and “civilize” the California native tribes, taught the Chumash at Santa Ines European methods of ranching, farming, weaving, candle making, and leather making for boots and saddles. Chumash labor in turn built the aqueduct to bring water from the Alamo Pintado and Zanja de Cota Creeks to a nearby reservoir, and from there to the lavenderia building in tile pipes.

In 1824, however, the California missions were beset with problems. To the south, the Hidalgo Rebellion in Mexico had severed all communication with Spain. Mexican garrisons were installed in the old Spanish presidios across California, and the new government demanded they be sustained by the mission populations they guarded. This often led to tension and, occasionally, violence. That year, a soldier visiting Santa Ines brutally whipped a Chumash Indian and the neophytes rose up in revolt at Santa Ines, La Purisima Concepcion, and Santa Barbara. Half of Santa Ines’s structures were burned to the ground, including the soldiers’ quarters. When the church caught fire, however, the neophytes helped put out the flames before fleeing. Some fled to the hills, but many traveled to Mission La Purisima Concepcion, which they held for a month as a makeshift fort before it was attacked by Mexican troops and many Chumash were killed and wounded.

Santa Ines declined steadily until it secularized by the Mexican government in 1834. The Franciscans were stripped of their authority and the missions were administered by government appointed-overseers. Many of the Chumash, deprived of the mission’s support, left to work on the surrounding ranchos or returned to their villages as best they were able.

Unlike many of the missions, however, Santa Ines was not forced to wait until Abraham Lincoln returned the missions to the Catholic church during the 1860s. In 1843, Mexican Governor Manuel Micheltorena returned 36,000 acres of mission land back to the Bishop of California, and upon it was established Our Lady of Refuge Seminary--California’s first institution of higher learning. A few years later, American officer John C. Fremont, largely credited with (illegally) precipitating California’s revolt against the Mexican government at the outset of America’s war with Mexico, stopped at Santa Ines with a small body of troops while en-route southward to seize Los Angeles.

In 1862, President Abraham Lincoln returned most of the land to the Franciscan Order. While the seminary at Santa Ines continued to operate until the 1880s, the mission’s renaissance did not truly arrive until a Danish company bought up thousands of plots of old mission land near Santa Ines in the early 1900s and incorporated the town of Solvang. Intended as a haven for Danish immigrants, the new residents enthusiastically embraced the heritage of the mission. Through the efforts of Father Alexander Buckler in 1904, reconstruction of the Mission was undertaken, though major restoration was not possible until 1947 when the Hearst Foundation donated money to pay the for project. Restoration continues to this day, and the Capuchin Franciscan Fathers are renowned for their care of the church and grounds.

The Mission is an active Catholic church, and is open to visitors year-round. The museum is particularly well known, most especially for an extensive church vestment collection (symbolic religious clothing), including a religious garment belonging to Friar Junipero Serra himself, founder of the missions.