This Gilded Age mansion and country estate was designed by McKim, Mead & White, with landscaping by Fletcher Steele. Built in the 1880s for lawyer Joseph Choate, it was given by his daughter to The Trustees of Reservations, who operate it as a museum. 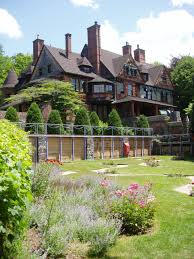 Since the 1870s, Joseph and Caroline Choate had summered in Stockbridge with their young family. Like so many others, both then and now, they fell in love with the Berkshires and decided to build a summer retreat of their own. In 1884, Choate sought the advice of his friend, Charles McKim, of the architectural firm McKim, Mead & White. The result was Naumkeag – a gracious 44-room “cottage” with breathtaking views over the Housatonic River Valley.

Naumkeag was a creation of the Gilded Age, a time of transformation after the Civil War, a time when Andrew Carnegie and Cornelius Vanderbilt built their fortunes. The newly rich cemented their social position by constructing elaborate European-style country estates. The Choates were part of this social mix, but Naumkeag was a bit different – instead of a showplace open six weeks a season, it became a beloved family home used from April to November.

Naumkeag was the Native American name for Salem, Massachusetts, where Joseph Choate was born. Choate graduated from Harvard Law School and moved to New York City where he quickly rose to prominence. During his illustrious legal career, Choate was the premier courtroom lawyer, arguing cases in front of the Supreme Court. In 1899,Choate was appointed by President McKinley to be the Ambassador to the United Kingdom. Caroline Choate was a trained artist interested in women’s education, co-founding Barnard College.

Their daughter, Mabel Choate, inherited Naumkeag in 1929, and for the next 30 years worked with landscape architect Fletcher Steele to create the magnificent gardens for which Naumkeag is now known, including the world-famous Blue Steps. Today, Naumkeag provides a glimpse – through the eyes of one family – into a brief and now-vanished period of American history.

Mabel Choate bequeathed Naumkeag in its entirety, including all of the household furnishings and fine art, to The Trustees of Reservations. Since the property’s opening in 1959, it has become a popular destination for area residents and visitors to the southern Berkshires. Approximately 11,000 people tour the house and experience the beauty and tranquility of the gardens each year.