Bandelier National Monument is protecting over 33,000 acres of land in New Mexico. This land includes beautiful canyons, mesa country, and evidence of human presence from over 11,000 years ago. The land was part of the territory inhabited by the Ancestor Pueblo People. Their building structures on this site date back two eras. Since the acres cover about 50 square miles, there are many wildlife habitats and hiking zones available for visitors. The park got its name from Adolph Bandelier, a Swiss anthropologist who supported the preservation of the land. The park gets roughly 200,000 visitors per year with admission at $12 per car.

View of the Bandelier park. 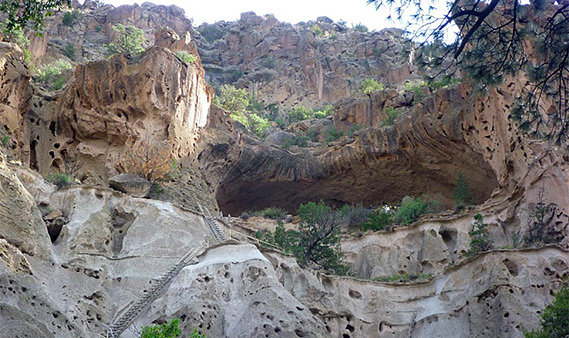 Natural cavities at the Bandelier park.

The visitor center at Bandelier park.

Hiking in the park reaches elevations ranging from 5,000 feet to 10,000 feet. The park includes views of the Jemez Mountains, the Rio Grande, Valles Caldera, and Cerro Grande. Inhabitation of this land dates back to 1150 CE with the Puebloan people. There is evidence of basalt and obsidian artifacts being traded and rock markings that indicated these people traded with other groups near what is now Mexico. Adolph Bandelier visited the land in 1880 and described it as "the grandest thing I ever saw." Due to his interest and research, the area was designated a National Monument by Woodrow Wilson on February 11, 1916. During the 1920s and 1930s a lodge and other small buildings were built to improve the lands function.

Frijoles Canyon, included in this park, contains homes from the Pueblo ancestors, their rock paintings, and petroglyphs. Various residential structures were built on the ground of the canyon and other holes were made in the side of the canyon by volcanic tuff and humans. Visitors can explore these structures by taking a 1.2-mile trail from the visitor center to the canyon. Ladders are also available at these structures so you can climb up and look into these cutout areas. One of the most popular sites in the canyon is Tyuonyi, which stands 1 to 3 stories high. The ceiling structure of Tyuonyi dates back to the 1300 and 1400's. Other trails in this park lead to smaller home structures, mesa country, and waterfalls that range from an hour hike to multiple day hikes. Some of the sites that were offered in earlier years have been destroyed by the Cochiti Lake on the Rio Grande. Although lower-elevation areas were destroyed, the higher elevation offers skiing during some winters.

Frijoles Canyon gets various snowfalls throughout the year, only averaging 25 inches per season. Mesas country gets twice that and even higher elevations get more. Most snow days the Main Loop Trail from the visitor center will be closed until the workers have cleared its path. Walking along freshly fallen snow will eventually create ice patches. This is dangerous, so the workers prefer visitors to wait until later in the day to hike. The visitor center offers a lodge with a fireplace where people can wait until the trail is cleared. Depending on the amount of snowfall, the park may be closed until cleared and safe. The yearly snowfall provides over half the precipitation for various areas of the park, which is necessary to keep the park beautiful. The snow gives the park a different look and may highlight structures that previously went unnoticed.

The Bandelier National Monument was made to preserve the native history of the Pueblo people. The various wildlife such as tarantulas, American pika, and the Abert's squirrels can be seen during their peak times of appearance at several places throughout the park. The trails in the park are not only for hiking, but also bike riding and running. The Bandelier National Monument is home to many different animals and plants who are found only in this park, making their preservation essential.