Our Lady of Victories (The Portland Sailors and Soldiers Monument)

Portland proudly showcases a total of four Civil War Monuments throughout the city. However, the most popular and easily the most famous Civil War monument is the Portland Soldiers’ and Sailors’ Monument, also known as Our Lady of Victories. Located in the beautiful Monument’s Square in Downtown Portland, the Our Lady of Victories monument features a central, 14-foot-high bronze statue of the female “Victory,” a symbol of unity. She holds a flag in one hand and a shield and branch of maple leaves in the other, and according to the sculptor Franklin Simmons, Victory is modeled after the Roman Minerva, goddess of both wisdom and war. The granite base of the monument displays groups of bronze figures, symbolizing Maine’s sailors and soldiers who gave their lives during the Civil War.

Current view of the Our Lady of Victories monument 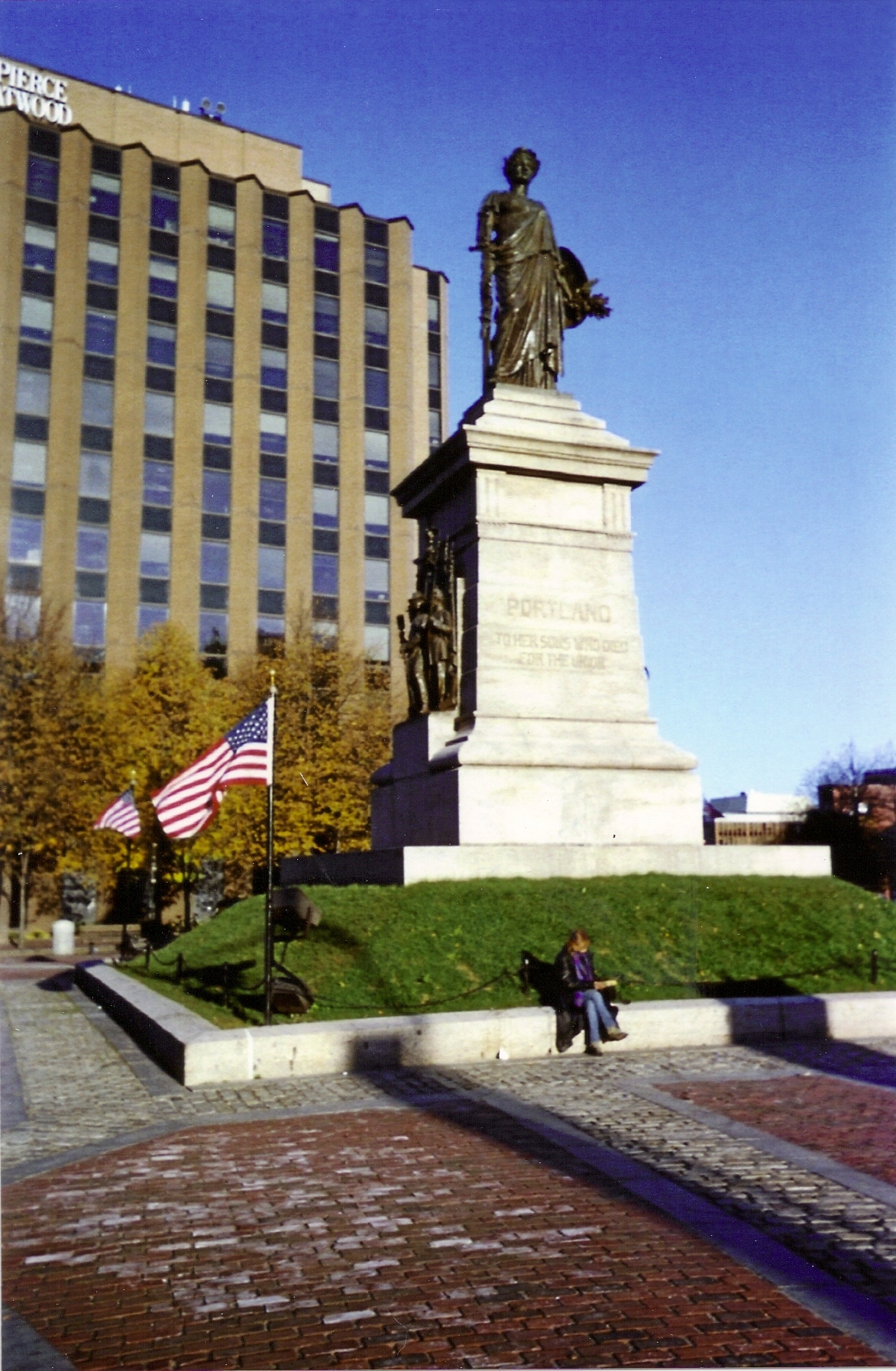 Postcard from 1939 showing the monument 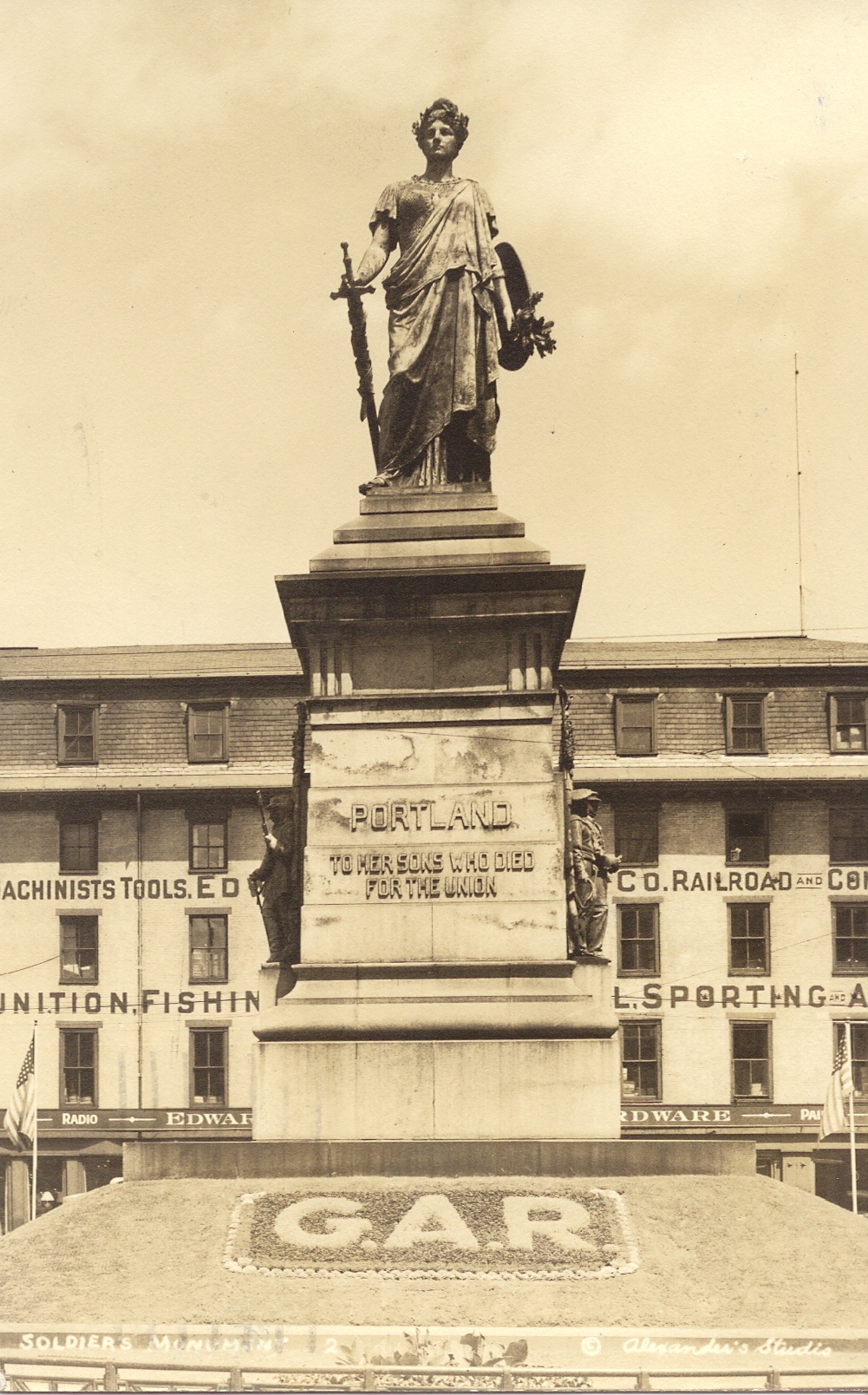 Monument Square and Congress Street in the 1890s 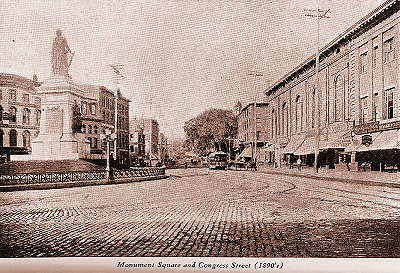 Franklin Simmons, sculptor of the monument 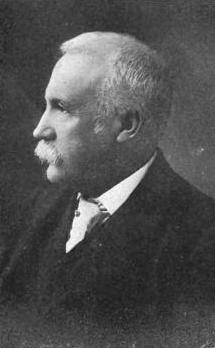 In the years following the Civil War, during the Reconstruction Era, it was fairly common for eastern cities and towns to erect civic monuments paying tribute to their men and women who sacrificed during those bloody four years. Although no land battles were fought in Maine, Portland lost upwards of 5,000 lives during the course of the war, which equates to about one-sixth the population (the population of Portland in 1865 was 30,124).

Furthermore, in 1866, one year after the Civil War ended, Portland experienced its most devastating fire, the 1866 Great Fire of Portland. Known as the greatest fire in an American city at that time (the Great Chicago Fire wouldn’t occur until 1871), this fire left nearly 10,000 people homeless and burned around 1,800 buildings to the ground.

Portland was in need for a great morale boost in those darker years. In 1873, seven years after the fire, Brevet Brigadier General John Marshall Brown formed a Portland Monument Association to erect a monument paying tribute to the 5,000 lives lost in the war. Sylvester B. Beckett, one of the founders of the Portland Natural History Society in 1843 and a prominent writer, poet, and editor, kept detailed records of the men who died during the war. To get this number, Mr. Beckett probably counted the number of Portland men named in the Adjutant-General's report, and some have criticized the accuracy of his account.

A contest was soon formed to find a sculptor for the monument, and one of the most prominent American sculptors of the 19th century, Franklin Simmons, was awarded the honor. Simmons is also the creator of Portland’s Longfellow Memorial.

Working from his studio in Rome, Italy, Simmons casted the bronze sculpture for the Civil War monument, though the granite pedestal and the smaller bronze sculptures were given to New York architect, Richard Morris Hunt, the man who also designed the base for the Statue of Liberty.

When the memorial was official dedicated on October 8th, 1891, there was a well-attended, highly emotional gathering and ceremony. General Brown, who formed the Portland Monument Association, gave a speech at the ceremony and said, “At last, a fitting monument on the fittest spot of the fairest city of our land.”

The Our Lady of Victories monument was added to the National Register of Historic Places on April 1, 1998.1