The Buffington Island Battlefield Memorial Park shares the history of the most significant Civil War battle fought in Ohio. On July 19, 1863, a Union army overpowered Confederate cavalrymen led by General John Hunt Morgan in what became known as the Battle of Buffington Island. The capture of Hunt ended his regiment's monthlong diversionary raid into Indiana and Ohio. While Hunt's commander, Confederate General Braxton Bragg, had authorized Hunt and his division of over two thousand men to conduct raids of Union-controlled sections of Kentucky and Tennessee, Hunt's decision to cross the Ohio River was a violation of orders. Despite causing damage and diverting Union troops, the raid is considered a failure owing to the death, desertion, or capture of nearly his entire force. After his capture, Hunt escaped from an Ohio jail and was killed the next year while trying to evade Union soldiers. 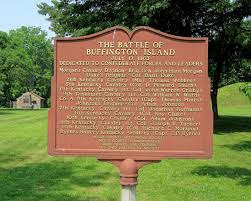 This monument was built using stone from local boulders in remembrance of the Battle of Buffington Island. 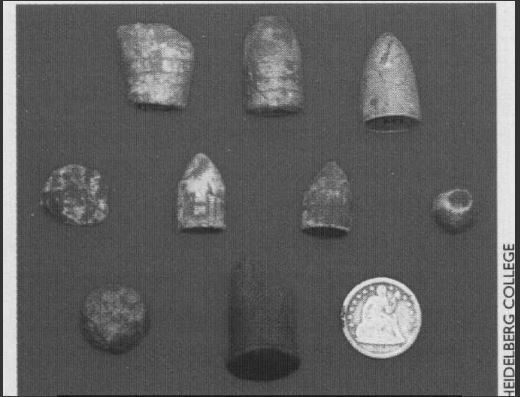 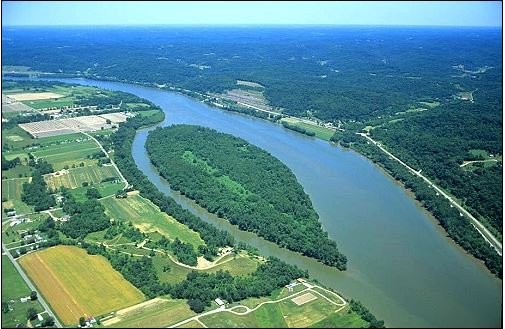 Map of Confederate General Morgan's raid through Ohio that climaxed with his defeat at the Battle of Buffington Island. 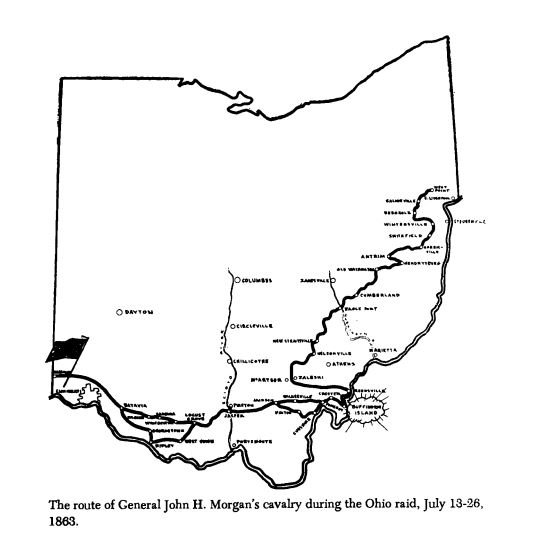 From July 13 to July 26, 1863, General Morgan led more than two thousand army men across Southern Ohio. Morgan's mission was to distract and divert as many Union troops as possible from the action in Middle Tennessee and East Tennessee. Ohio Governor David Todd responded by deploying Ohio militia to protect southern counties from Morgan's raiders. On July 18, 1863, Brigadier General John Hunt Morgan along with Confederate troops attempted to escape Ohio into West Virginia while fleeing pursuing Union forces. Morgan and his men would eventually be cut off before their escape across the Ohio River and became engaged in a 13-day conflict along the banks and hills of the Ohio River.

Union Soldiers lead by General Henry M. Judah and local militia surrounded Morgan and his men, blocking Morgan from crossing the Ohio River. The Northern forces would eventually defeat the Confederate raiders as they were either killed, captured, or dispersed into West Virginia and other parts of Ohio. The Confederates suffered a tremendous loss during the conflict. Nearly 750 men were captured, 300 escaped. Beyond that Morgan and 400 hundred additional men would be captured in Columbia County, Ohio.

During the battle, Union forces deployed two U.S. gunboats to engage Morgan and his men from the waters of the Ohio River. This small skirmish was the only naval military action which involved engagement with enemy forces ever to take place in a body of water within the state of West Virginia. The Battle of Buffington Island included James Garfield, Rutherford B. Hayes, and William McKinley. These three Union Soldiers would eventually become United States Presidents.

As early as July 17th, parts of the Ohio River were shallow enough to cross on foot-something that is hard to imagine today given engineering projects that have made the Ohio navigable by large vessels. However, because of an unexpected rising of the water levels, US naval gunboats were able to position themselves into strategic location in the range of Morgan's troops and blocking their escape route.

In the summer of 1999, Dr. Michael Pratt from Heidelberg College, along with his archaeology students, spent several days searching the area of the Battle of Buffington Island. Several significant artifacts were discovered during the exploration including ammunition, military buttons, and buckles, a seated liberty dime from 1857. These artifacts can be observed at the Meigs County Pioneer Historical Society in Pomeroy, Ohio. Several of these artifacts can be seen in included pictures on this page.

There is no visitors center, the Ohio Historical Society maintains four acres of the battlefield along with historic markers