The Henry Fearing House, built in 1847, is now a museum operated by the Washington County Historical Society of Ohio. Part of the Historic Harmar Village, it exemplifies the lifestyle of middle-class Victorian Marietta. 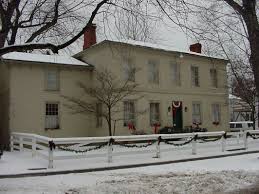 The Fearing House provides a glimpse of what life was like in Marietta during the 19th century. The house was built in 1847 for Henry Fearing, a successful businessman who owned developed property and interest in a steamboat. He also participated in the Temperance Movement and donated land for a Woman’s Home. The house was built in the Federal style, though an 1870 addition shows the influence of Italianate style at the time.

The Fearing House now operates as a museum. It is only open to the public from May to October. The museum houses a large collection of artifacts from the era.