Known as the largest tuberculosis sanatorium in the United States, the Arkansas Tuberculosis Sanatorium was a self-sustaining campus with its own dairy farm, vegetable gardens, livestock, fire department, schools, and chapel. This renown institution served as an example for other state-funded and privately owned sanatoriums and remained an innovative research and treatment facility until its closure in 1973.

1940s postcard of the facility 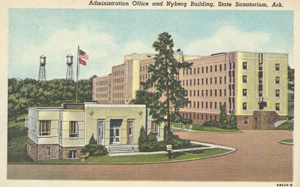 The Nyberg Building, completed in 1941. 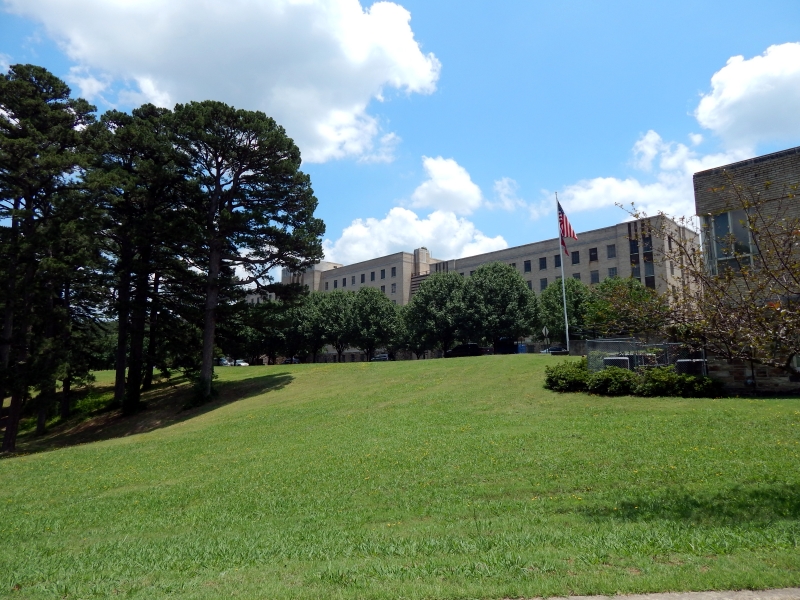 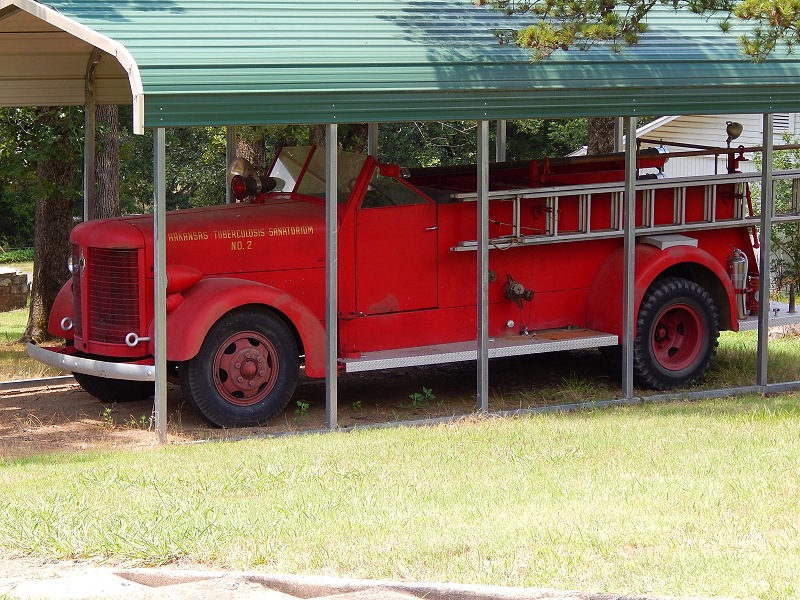 Entrance gate to the sanatorium.

Tuberculosis was a leading cause of death in the United States during the nineteenth century.  This disease, also known as consumption, seemed unpreventable and untreatable until the late 1800s and early 1900s, when scientific medicine, germ theory, and institutionalized medical care became more accepted practices among healthcare professionals.  Dr. Robert Koch discovered the tubercle bacillus in 1882, which led to the discovery of tuberculosis as a communicable, but treatable, disease.  In 1884, Edward L. Trudeau, a physician who suffered from tuberculosis, founded the Adirondack Cottage Sanatorium in Saranac Lake, New York, one of the first facilities of its kind in the United States.  He modeled this “rest cure” facility after the successful consumption sanatoriums in Europe.  Local, state, and federal government funding for institutionalized treatment also increased during the twentieth century, which allowed for the building and maintenance of large-scale tuberculosis sanatoriums and research facilities, like the Arkansas Tuberculosis Sanatorium.

Although private tuberculosis treatment remained popular in the early 1900s, Arkansas was one of the first states to construct a state-funded sanatorium facility.  In 1909 the Arkansas state legislature passed Act 378, a bill prepared by Senator Kie Oldman on behalf of Arkansas judge Joseph M. Hill, who received treatment for tuberculosis in Arizona.  Governor George Donaghey approved the act on May 31, 1909.  Act 378 appropriated a total of $80,000 of state funds, with $50,000 to establish a tuberculosis sanatorium and $30,000 for two years of maintenance of the facility.  In October 1909, the state selected 896.18 acres of land near Boonesville, Arkansas, for the sanatorium.

The first patient entered the facility on August 2, 1910, with 15 more patients admitted that month.  By November 1910, 68 patients received treatment at the sanatorium.  To accommodate the influx of patients from around the state, the Arkansas legislature approved more funding for building construction.  The Belle Pointe Masonic Lodge built the Mason’s Building for Children in 1924.  In 1935, the Works Progress Administration (WPA) constructed the Wildcat Mountain Sub-Hospital, which served to alleviate the over-population of the Arkansas Tuberculosis Sanatorium.  The Public Works Administration (PWA) began constructing buildings on the Arkansas Tuberculosis Sanatorium campus in 1935.  The passage of the Nichols-Nyberg Act by the state legislature in 1938 provided $1,200,000 for an extensive building program at the sanatorium.  The PWA also gave the sanatorium a grant of $948,071 for the construction project.  The facility grew to 1,200 patient beds and became a self-sustaining campus that included its own water supply, a post-office, movie theater, farm, dairy, school, church, power plant, apartments and dormitories for healthcare professionals and families, wastewater treatment plant, and heating plant.

By the 1950s, medical advancements including antibiotics, surgery, and chemotherapy greatly improved the treatments and health outlooks of tuberculosis patients.  Mobile x-rays allowed more people to be screened for tuberculosis, which increased preventative health measures in the state.  Because of its expanded campus and new facilities, the Arkansas Tuberculosis Sanatorium used and expanded upon these new treatments.  The death rate from tuberculosis in Arkansas dropped to 31.3 in 100,000 people by 1950.  Due to these medical advancements, most patient treatments lasted two to three months by the late 1950s, which was a drastic change to the two to three years treatments in 1934.  The number of tuberculosis patients greatly decreased by the 1960s due to improved preventative measures and antibiotics for treatment.  On February 26, 1973, the last patient was discharged from the Arkansas Tuberculosis Sanatorium.  The Arkansas legislature passed Act 320 in 1973 which deeded the property to the Mental Retardation-Developmental Disability Services.

In April 2006 the Arkansas Tuberculosis Sanatorium received designation as an Arkansas Historic District and was listed on the National Register of Historic Places in November 2006.  On September 18, 2010, the Arkansas Tuberculosis Sanatorium Museum opened on the facility’s campus.  The museum aims to preserve the history of the sanatorium and promote the facility’s impact on Booneville and its surrounding areas.

Arkansas Historic Preservation Program. “Arkansas Tuberculosis Sanatorium Historic District, Booneville, Logan County.” Accessed October 9, 2014. http://www.arkansaspreservation.com/historic-properties/_search_nomination_popup.aspx?id=2279. This is the Arkansas historic properties nomination application for the Arkansas Tuberculosis Sanatorium. The document focuses on the history of the sanatorium campus, including fiscal allocations and construction of the facility and the involvement and influence of local, state, and national government on the sanatorium. The historical significance and importance of the sanatorium lies in the impact of the advancements in treatment and healthcare for tuberculosis patients of the Arkansas Tuberculosis Sanatorium on local, state, national, and international healthy policies and medical facilities. Bates, Barbara. Bargaining for Life: A Social History of Tuberculosis, 1876-1938. Philadelphia: University of Pennsylvania Press, 1992. In this book, Barbara Bates uses patient letters and documentation preserved and retained by Dr. Lawrence F. Flick, a Philadelphia, Pennsylvania, physician, to discuss tuberculosis patients’ perspectives on medical treatment and care in Philadelphia during the late 19th and early 20th centuries. She argues that most historians focus on the advancements in tuberculosis management and treatment and the doctors and researchers responsible for these changes. Bates expands upon the historiography by including the voices of the patients. She examines the relationship between the patients and medical professionals by focusing on the gender, class, racial, and political stratification that influenced medical facilities and treatment for tuberculosis. Bynum, Helen. Spitting Blood: The History of Tuberculosis. Oxford: Oxford University Press, 2012. In this book, Helen Bynum focuses on the history of tuberculosis, including the pathology of the disease and the medical advances by physicians and researchers that led to the discovery of the bacillus and medicines and technologies used to treat, cure, and prevent the disease. Bynum argues that although tuberculosis is a controlled and almost fully eradicated disease in developed nations like the United States and the United Kingdom, the disease continues to decimate populations in under-developed countries. She relates the medical advancements for tuberculosis treatment to the experiences of tuberculosis victims George Orwell, John Keats, and the fictional Violetta from La Traviata. Leeper, William Tyrell. “Arkansas State Tuberculosis Sanatorium.” The Encyclopedia of Arkansas History & Culture. Accessed October 9, 2014. http://www.encyclopediaofarkansas.net/encyclopedia/entry-detail.aspx?entryID=2237. This encyclopedia entry focuses on the history of the Arkansas State Tuberculosis Sanatorium. Leeper provides information on the construction of the facility and the various uses of the buildings on the campus. He also includes information on how the facility is used today.