Unveiling of the Statue 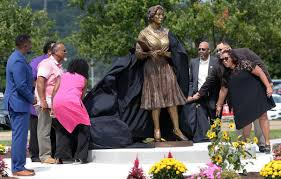 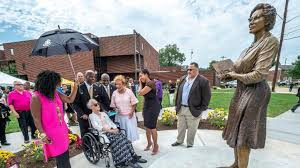 On August 25, 2018 the bronze statue of Katherine Johnson was unveiled in front of many West Virginia State University fans and Johnson's family and friends.  This statue is meant to inspire students and anyone who walks by it to never give up and always try hard, especially when it comes to knowledge they are passionate about.

Growing up Johnson, battled hardships as an African American woman.  Johnson loved to learn, and did everything she could to expand her knowledge.  Johnson stated, "I counted everything. I counted the steps to the road, the steps up to church, the number of dishes and silverware I washed … anything that could be counted, I did".  She was born in 1918 in White Sulphur Springs.   After she could no longer receive anymore education at fourteen years old in Greenbrier County, West Virginia, her father drove her more than 100 miles to Institute, WV so she could continue her education at West Virginia State University. She began studying math and French at the University.  Johnson then graduated from this HBCU (Historically Black Colleges and Universities) with two college degrees at the age of eighteen.

Johnson went on to study for her masters at West Virginia University, where she was one of the first African American students to attend.  Her dream was to be a research mathematician, a difficult task during this time period.  She moved to Virginia after being offered a teaching job.  She remained teaching there for fifteen years.  After this she became a stay-at-home mom to her three daughters, Katherine, Joylette, and Constnace.

Then Johnson joined NASA in 1953 as a mathematician.  This is when the Civil Rights movement first started to take off.  Her outstanding calculations made it possible for the U.S. to put the first American in space in 1961.  The following year her calculations allowed us to send John Glenn around the Earth three times.  In the future this allowed NASA to send someone to the moon.

These great attributes we're recognized in the movie 'Hidden Figures', released in January 6, 2017.  Katherine Johnson was played by star, Taraji P. Henson. She was also presented with the "Presidential Medal of Freedom", by none other than President, Barack Obama.  Now in the heart of West Virginia State University's campus, thanks to this new statue her legacy and drive will live on through many more years.