The World Peace Bell is on display for thousands for visitors to see in Newport, Kentucky. The bell weighs an astounding 33,285 kg and is considered the largest swinging bell in the world. The bell has engraved inscriptions honoring Human Rights and many important human right events over the last 1000 years. On New Year's Eve 1999 the bell was rung for the first time in the United States. The bell is still rung on occasion and always rings at five minutes till noon. The World Peace Bell was cast together by French bell founder Pierre, Philippe, and Cyril Paccard. The bell casters had a tedious task to fulfill under the watchful eye of master bell founder Fondrie Paccard. On March 20, 1999 the bell was first swung in a public ceremony honoring Human Rights. The bell in France was then shipped to the United States. The boat shipment took a month and a half to reach the port of New Orleans then traveled along the Mississippi River and Ohio River to Newport, Kentucky. When it arrived in Newport the town came together for the Tall Stacks Festival in celebration of the World Peace Bell. The American Bus Association named the Peace Bell the “Top Tourism Event” in 1999. The World Peace Bell has been turned into a museum where visitors can come see the iron beauty. The museum offers tours and costs nothing to see. When the bell is struck it is said it can be heard from 25 miles away. Isn't that something! The bell is rung by a special iron striker that prevents the bell from being damaged. If you are ever in the Newport area of Kentucky you should visit the World Peace Bell and honor the life of freedom. 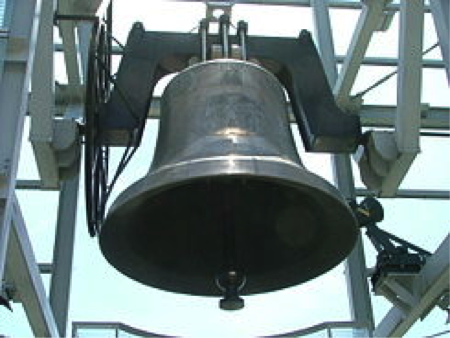