This local history museum is located in the historic courthouse, which was in operation from 1885 until 1976 when a new courthouse was completed. The large brick and stone structure now serves as a period piece museum with numerous exhibits and displays that tell the story of Eaton County’s history and culture. The courthouse is listed by itself on the National Register of Historic Places and is a contributing property to the Charlotte Central Historic District.

The Eaton County Courthouse was added to the National Register of Historic Places in 1971. 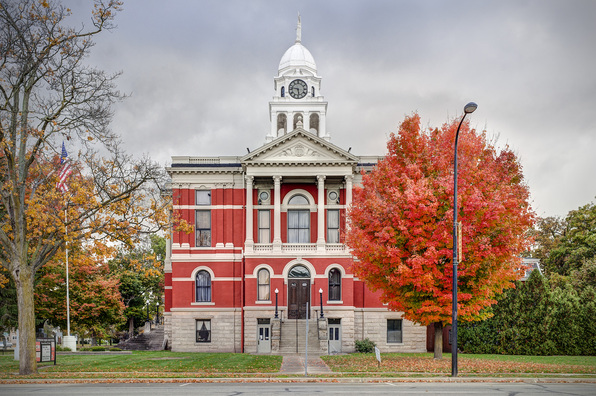 Cannon on the courthouse grounds. 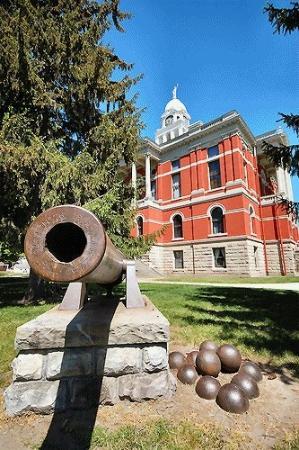 Lady Justice atop the courthouse's rotunda 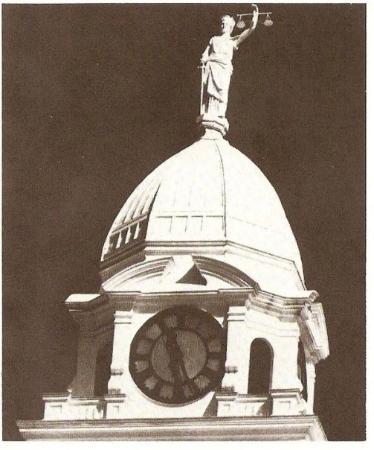 The restored courthouse now appears as it did as the country approached the 20th century.  Its display rooms now include judge’s offices, the register’s office, county treasurer’s office, a law library, witness rooms, and a small kitchen. However, the building’s centerpiece is the large, second-floor courtroom, complete with a high, curved ceiling, wooden rail, and ornate judge’s desk.

The courthouse was damaged by a fire in 1894, during which the rotunda dome collapsed. Fortunately, the fire spared the building’s wings, but evidence of the fire is still present on the first floor of the rotunda.  The building also features nine fireplaces and four interior bathrooms, or water closets, with indoor plumbing, which was unique for the time in which the courthouse was built.

The courthouse also houses its original records vault that preserved the many property deeds, birth certificates, and marriage licenses from the fire of 1894.  Also located within the building is a museum store that sells a wide variety of books on the history of the courthouse and Eaton County, among other things.

"About Us." Courthouse Square Museum. Accessed May 12, 2015.  http://csamuseum.weebly.com/about-us.html.

Tue-Thu 9-4 Special events and by appointment