Inspired by the Arc de Triomphe in Paris, the Memorial Arch was dedicated in 1924 to honor the 42nd Rainbow Division and all residents of the Rosedale neighborhood who served in World War I. In 1988, the Rosedale Development Association – a local neighborhood and business group – noticed that the monument was in disrepair. They raised the money needed for a massive restoration project in honor of the Arch’s 65th anniversary.

The arch was designed by Rosedale resident John Leroy Marshall and dedicated in 1923. Image obtained from the City of Westwood. 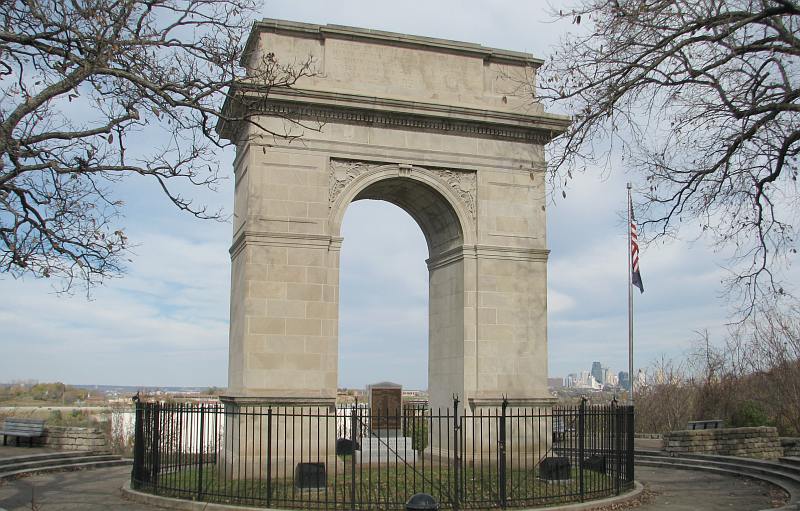 In 1993, a monument was added under the Arch to honor soldiers of the World War II, and the Korean and Vietnam Wars. Image obtained from kansastravel.org. 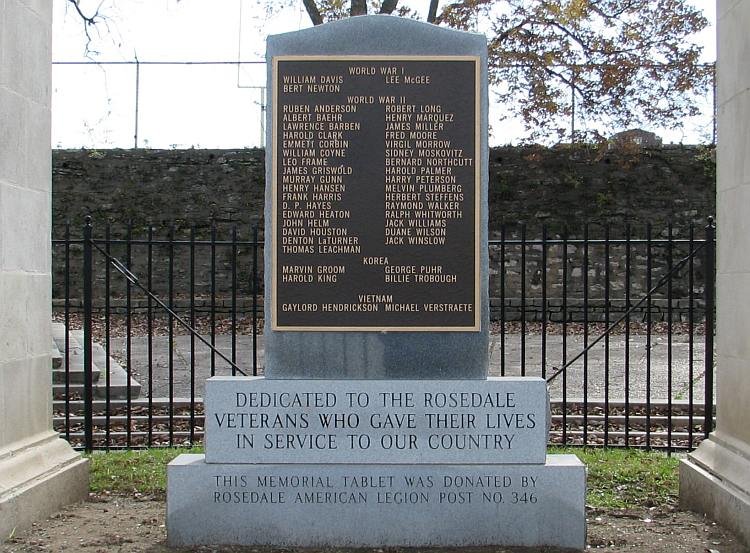 During World War I, the city of Rosedale, Kansas was an independent municipality adjacent to Kansas City. In June 1917, following the United States’ entry into the war, a group of over 300 men from Rosedale and the surrounding area assembled at the top of Mount Marty and were sworn into the service by Lt. Col. Frank L. Travis. Many of the Rosedale enlistees were assigned to the 117th Ammunition Train, which was part of the 42nd United States Infantry Division. Nicknamed the “Rainbow Division,” the 42nd was composed of National Guard troops from 26 states. The division was deployed to Europe, where it served alongside the Fourth French Army and fought in the Fourth Battle of Champagne, among other actions. On May 12, 1919, Rosedale held a celebration for the returning soldiers; Hudson Road was even renamed Rainbow Boulevard in honor of the division.

In the years immediately following World War I, efforts began to memorialize the conflict. In 1921, the Kansas state legislature passed a bill allowing municipalities to issue bonds for the purpose of erecting memorials for World War I veterans. On June 21, citizens of Rosedale voted 129 to 77 in favor of issuing $25,000 worth of bonds to construct a monument. Work on the project was delayed for two years when Kansas City annexed Rosedale that same year. A young veteran and American Legion Post #346 member named John Leroy Marshall was selected to design the monument. Marshall had been one of the first students to enroll in the University of Kansas’s architecture program in 1912, but he dropped out to serve in the war in 1917. Marshall based his design for the memorial largely on the Arc de Triomphe in Paris, which he reportedly had drawn sketches of during the war. A plot of land for the memorial was purchased on the top of Mount Marty for $10,000.

A lavish groundbreaking ceremony was held on July 20, 1923. 6,000 people attended the festivities, including dignitaries such as generals and local politicians. General Henri Gouraud, commander of the Fourth French Army, was invited to preside over the ceremony and break ground with a gold spade. Construction of the Rosedale Arch proceeded for the next year and cost $12,179. It was formally dedicated on September 7, 1924 in a ceremony that was reportedly much more subdued than the groundbreaking. The limestone arch stood 34 feet tall and 25 feet wide, and was much smaller and simpler than the Arc de Triomphe. Originally plans called for the names of Rosedale veterans to be carved onto the arch, but this never happened. The arch was also intended to serve as a gateway into a new recreational park, but it was never built.

The Rosedale Arch fell into obscurity soon after its construction. Its location on top of Mount Marty was both isolated and inaccessible, and during the following decades it fell into disrepair. In 1962 the site was cleaned up and the arch was rededicated to the veterans of all wars, but it was soon neglected again. During the early 1970s, for the fiftieth anniversary of the arch’s construction, Kansas City launched a project to restore the arch and make it more accessible to the public. An access road to the site was built, landscaping and a circular plaza were added, and floodlights were installed to illuminate the structure. It was rededicated once more in 1974. In 1988 the Rosedale Development Association began to assume responsibility for maintaining the arch. It has periodically made improvements and restorations to the site, including the installation of benches, a protective wrought-iron fence, and an informational speaker box. In 1993 a new marker was erected underneath the arch honoring the Rosedale veterans of World War II, the Korean War, and the Vietnam War.

Open from dawn to dusk