The Dingess Petroglyphs were found on a coal strip mine in Logan Co., WV in 1987. They are thought to be created by Native American in this area.

View of the Dingess Petroglyphs. 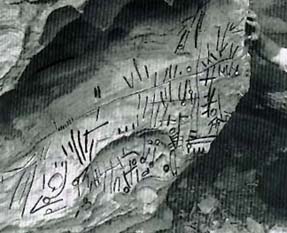 Petroglyphs are images created by removing part of a rock surfaces by incising, pecking, carving, and abrading. The Dingess Petroglyphs were located on a coal strip mine in Dingess WV. Since the discovery they have been moved to a permanent location just a short distance from the original site at Laurel Lake in Lenore, West Virgina. The "glyphs" were discovered by some local miners on the mountain and instantly reported the findings. After reviewing them, the inspectors were sure of the findings and wanted to preserve their Native American history, although some speculate that the markings were made by Irish missionaries who purportedly visited the area over a millennium ago in the eighth century. Although discounted by mainstream professional archaeologists, some believe missionaries known as the Ogam were from Ireland and the markings are similar to the Ogam alphabet.