For those knowledgeable about the history of agriculture in the country, the Warkentin name will surely be recognizable. Bernard Warkentin, a Mennonite immigrant farmer from Ukraine, was responsible for discovering that Russian red wheat (which he brought from his homeland) was most suitable to be grown in the United States. He owned a homestead in Halstead, Kansas where he worked to make this discovery (the homestead is now a National Historic Landmark). Russian red wheat is a hardy, high-yield crop; these qualities eventually made Kansas a major producer of flour for the nation, and made Bernard a prosperous man. He built the house in 1887 in the Victorian Baroque style. Given its distinctive and well-preserved architecture, and its association with Bernard Warkentin, the house was added to the National Register of Historic Places in 1970. Today it operates as a historic house museum. It contains most of the original furnishings.

The Warkentin House was built in 1887. 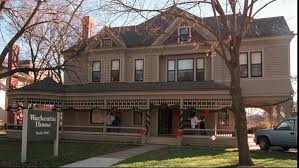 Bernard's widow, Wilhelmina, lived in the house until she died in 1932. It was then deeded to the Bethel Deaconess Hospital and became where the sister's lived. In 1969 or so, a historic preservation organization acquired the house. It is not clear when it became a house museum.