Located just northwest of Little Rock, Arkansas, nestled in the wilderness, stands the famous Thorncrown Chapel. This world famous chapel has seen over 6 million visitors since its construction. What really makes this chapel unique is it’s predominately glass structure and open air appearance. It is a full working chapel and church and has played host to oodles of weddings each year. It is open April through November 9:00am to 5:00pm and in March and December it is open 11:00am to 4:00pm. In January and February it is closed unless it is for weddings. It holds Sunday Services 9:00am and 11:00am April through October and at 11:00am only in December.

Outside view of the chapel 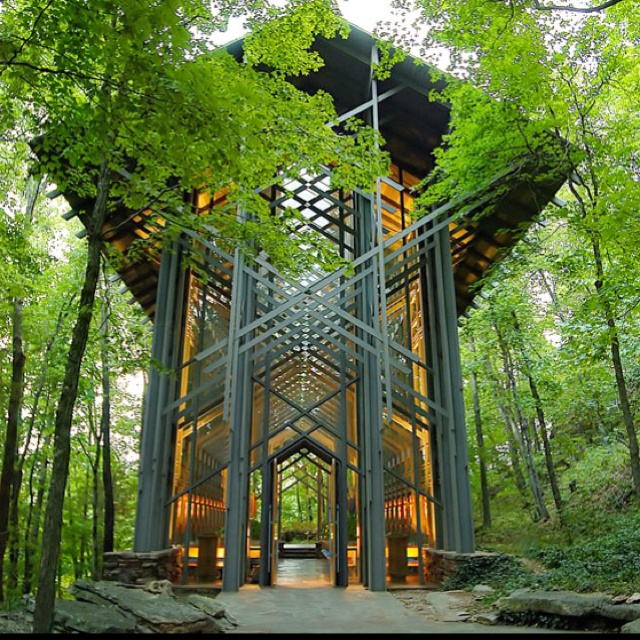 Inside view of the chapel 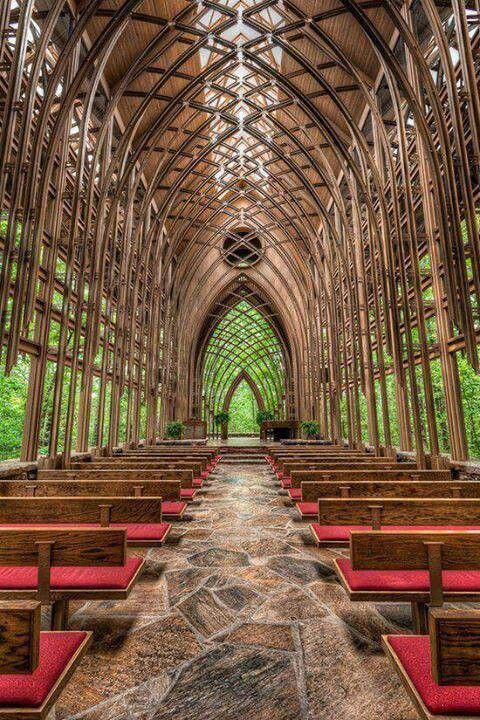 The chapel was founded by Jim Reed from Pine Bluff Arkansas. He bought the land that the chapel now sits on to build his retirement home in 1971. The location of the property is nestled in the middle of the Ozarks and features breathtaking views of the area. Reed often received compliments his property by people exploring the area. He and his wife decided to build a spot for the local tourist. They decided to build a glass chapel for the people.

In the late 1970s, Reed met with E. Ray Jones who was a professor at the University of Arkansas. Reed explained his idea and Jones designed and helped construct it. The design is a predominately wood structure that is enclosed in all glass. From far away the building looks like it is an open air facility but on further inspection the glass can be seen. The chapel is also made out of wood that came from the Arkansas region. The design comes from the Prairie School of design which was famous in the late 19th and 20th Century in the Midwestern states characterized by horizontal lines and broad overhanging eaves. The designer, Jones, was actually an apprentice of the architect Frank Lloyd Right who was the leading designer of the Prairie School style architecture.

The chapel was added to the National Register of Historic Places in 2000. This is a great honor as very few structures under 50 years of age get placed on the prestigious list. It has been seen in many magazines such as, TIME and Parade. It has also been featured on many different television programs on NBC, TLC, and the 700 Club.