Tombstone Courthouse State Historic Park features a large historical museum withing the former county courthouse. Between its completion in 1882 and the transfer of the county seat to Bisbee in 1929, this building housed the offices of the Cochise County sheriff, recorder, treasurer, and board of supervisors. It also held the jail and various offices and the courtroom. The building is now home to a museum that includes exhibits about the early years of Cochise County. In addition to exhibits related to Tombstone, the museum offers displays about miners, cattleman, business leaders, early settlers, and the growth of the region. Given the association of Tombstone with lawlessness and prostitution, visitors are often drawn to artifacts such as a license for a legal brothel and an invitation to a public execution. While these artifacts are subtle, the replica of the gallows in the courtyard-the location of several public executions-stands as a reminder of the violence that sometimes shaped life in early Tombstone and Cochise County.

This former courthouse now serves as a local history museum. 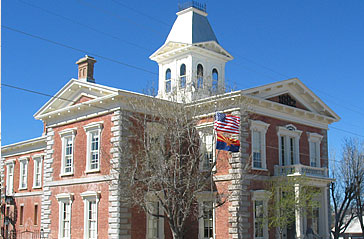 This replica of the historic gallows where several men were executed stands as a reminder of the violent past of Cochise County. 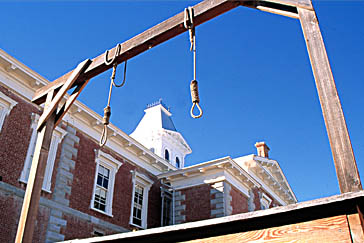 The park building was built in 1881 in the shape of a Roman cross serving as a county seat. It is a two-story courthouse, which was designed in the Victorian style, with red bricks. The courthouse is an example of territorial architecture and continues to serve as a county facility until 1931. January 5th, 1942 the building was leased to the Tombstone Restoration Commission and they restored the first floor and the building was soon open to the public in 1956.

The parks history starts with “Following the 1877 discovery of silver ore by prospector Ed Schieffelin in southeastern Arizona, the town of Tombstone was founded and grew rapidly as miners flooded the area in the hope of finding their fortunes. At the time, the area was part of Pima County with the county seat Tucson being a rugged two-day, 70-mile journey away. In 1881, the residents of the thriving boomtown voted to separate from Pima County and the territorial legislature subsequently formed a new county, Cochise County. A new courthouse was built the following year and housed all of the county’s offices” (National Register of Historical Places). The building was also housed to the recorder, treasure, and board of supervisors, jail, and courtrooms. This building has been used for so many historical events and now is open to the public to see and learn about.

The Tombstone remained the county seat until 1929. The last county office left the courthouse in 1931. Soon after that the courthouse was turned into a hotel during the 1940s. After that the building stood vacant until 1955. This is when the Tombstone Restoration Commission bought it. Right away they started reconstruction on the courthouse and finally the development as a historic museum that has continued to operate as a state park since 1959.

The Tombstone Restoration Commission transferred ownership of a lot right across the street. This is mostly used for only parking. The old office is located across the street and the stat parks acquired a little north of the courthouse on January 12th 1973. The last parcel acquired for the Park was Ed Schieffelin Monument site located 3 miles north and west of the city. This property was donated to State Park on December 31st, 2003.