The Sharlot Hall Museum of Prescott opened in 1928 by Sharlot M. Hall as the Old Governor's Mansion Museum. Today, the museum features seven historic buildings, compelling exhibits and beautiful gardens, which serve as the setting for numerous public festivals. The Library and Archives, open to the public, hold a vast collection of rare books, original documents, historical photographs, maps and oral history. The Sharlot Hall Theater offers an historical lecture series and music events in support of our Folk Music festival in October, and the Museum's Living History programs bring the past alive through hands-on demonstrations. 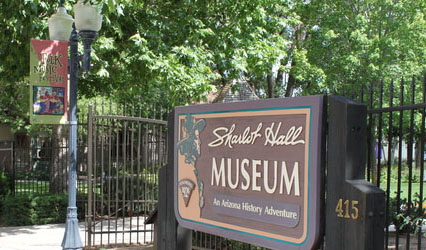 Sharlot Mabridth Hall (1870-1943), who became well known as a poet, activist, politician, and Arizona’s first territorial historian. Sharlot Hall was one of the West’s most remarkable women. As early as 1907, Ms. Hall saw the need to save Arizona's history and planned to develop a museum. She began to collect both Native American and pioneer material. In 1927, she began restoring the first Territorial Governor’s residence and offices and moved her extensive collection of artifacts and documents opening it as a museum in 1928.