Construction of the USS Midway began in 1942 in Newport News and the vessel was launched in March 1945. After completing one last tour of duty in the First Gulf War, the Midway was decommissioned after 47 years of service and is now a museum that preserves and shares the history of America's longest-serving aircraft carrier to date. Visitors to the museum have the opportunity to tour the historic aircraft carrier and can experience being a part of a “city at sea." Guests get the chance to tour the ship with an experienced guide. The tour includes the bridge, officer and enlisted mess and quarters, engine rooms and machine shops, and 29 restored aircraft on the ship's massive deck. There are even special flight simulators and aircraft where visitors can climb into the cockpit.

Over 250,000 men and women served aboard the USS Midway between its completion in 1945 and 1992, when the carrier was decommissioned. 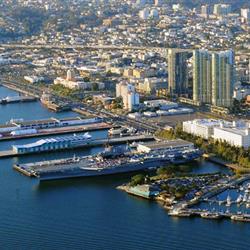 The crew aboard the USS Midway were able to launch a plane every sixty seconds. 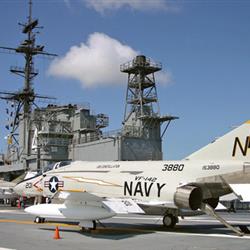 The USS Midway was America’s longest-serving aircraft carrier of the twentieth century, remaining active from 1945 to 1992. The number of sailors to serve aboard this carrier reached over 225,000. After service in World War II, the Midway participated in a number of training exercises. In 1955, she arrived in Puget Sound Naval Shipyard and underwent an extensive modernization fitting that took two years and included the addition of steam catapults and an angled flight deck to allow for the take-off and recovery of jet aircraft.

On June 17, while providing escort for a strike mission against the Thanh Hoa railroad bridge, two F-4 Phantoms from Midway scored the first air-to-air kills of the war by downing two enemy MiG-17s.1  Three days later, two A-1 Skyraiders downed another MiG-17 while on a rescue mission.2  In February 1966, Midway sailed to San Francisco Naval Shipyard and underwent another massive refit that took another four years and saw her flight deck expanded.

The Midway was recommissioned in the spring of 1971 for service in the Vietnam War. The American bombing offensive against North Vietnam, Operation Rolling Thunder, had been halted by that time but in the spring of 1972, the North Vietnamese launched a massive offensive against South Vietnam. That spring, the Midway launched strikes against key targets throughout North Vietnam, with particular emphasis on the port of Haiphong.  This was the beginning of yet another strategic air offensive against the North, code-named Operation Linebacker. Midway pilots downed several Soviet-made MiG fighters and in August, a US Navy helicopter recovered a downed navy pilot 20 miles northwest of Vinh, the deepest penetration of a rescue helicopter into North Vietnam. On January 12, 1973, 15 days before the Paris Peace Accords effectively ended US involvement in the Vietnam War, an F-4 Phantom from Midway claimed the last aerial victory of the war by downing a MiG-17 over the Gulf of Tonkin.

In April 1975, Midway participated in Operation Frequent Wind, the evacuation of civilians and military personnel from Saigon via helicopter. On April 29, Midway rescued a small plane carrying seven people, including South Vietnamese Air Force Major Buang-Ly (the crew had to remove the carrier's arresting wires and a number of Huey helicopters that were crowding the deck).  After Vietnam, Midway participated in a number of minor operations throughout the 1980s.  On January 17, 1991, Midway launched air strikes against Iraqi forces as part of Operation Desert Storm.  This was Midway's final combat mission.  On April 11, 1992, almost five decades after she launched, USS Midway was decommissioned at Naval Air Station North Island in San Diego.  In January 2004, the carrier was moored in San Diego and opened to the public as a museum ship five months later.

The USS Midway was well known for several humanitarian missions and also naval breakthroughs. Furthermore, it was the only carrier to continuously serve over the course of the entire Cold War. The USS Midway museum opened June 7th, 2004. By 2012, the USS Midway Museum reached the impressive benchmark of over 1 million annual visitors.

The USS Midway has a four-acre fight desk and a 360 degree panoramic view downtown San Diego. This museum has up to 60 exhibits for all ages to enjoy, 29 of which are aircraft, optional flight simulators, videos, climb-aboard aircraft, outdoor café, and gift shop. While visiting this museum you can get a hand-on experience and get to actually experience what the ship has been through and its story.

The aircraft portion of the museum is on display for all visitors and each aircraft captures a unique era and story behind this carrier's extensive career, while simultaneously allowing the visitor a sense of how this carrier and its exhibits fit in the larger story of U.S. military history. Visitors will find aircraft from World War II, the Korean War, Vietnam, and Desert Storm. Some newer additions to the exhibit include the F4F Wildcat, SH-60 Seahawk, and HUP-2 Retriever.

Another popular attraction is the flight simulator, which offers two types of flight simulators for people of all ages. Guests get to experience launching off of the flight deck, engaging in combat situations, and returning to safety. The museum is also a center feature of the San Diego Veterans Day celebration. The museum provides a 40-foot aircraft shaped balloon that is a part of the Veterans Day parade.

Perhaps most notable for the research-minded visitor is the impressive naval research library operated by the USS Midway Museum. Touted as the "best naval library in the West," the research library houses over 9,700 items, most in the areas of naval aviation, aircraft carriers, WWII and the Pacific.