Elisha Winfield Green (1815 - 1893) was a former slave who became a respected Baptist leader in Kentucky. Green founded two churches by 1855, the First African Baptist Church of Maysville and then the First African Baptist Church of Paris, Kentucky. He also served as a moderator of the Consolidated Baptist Educational Association, and promoted the establishment of what is now the Simmons College of Kentucky. In 1883, Green found himself fighting for his civil rights after being assaulted beaten for failing to give up his seat on a train.

The Elisha Green historical marker is located at the intersection of Maddox Alley and West 4th Street in Maysville, Kentucky. 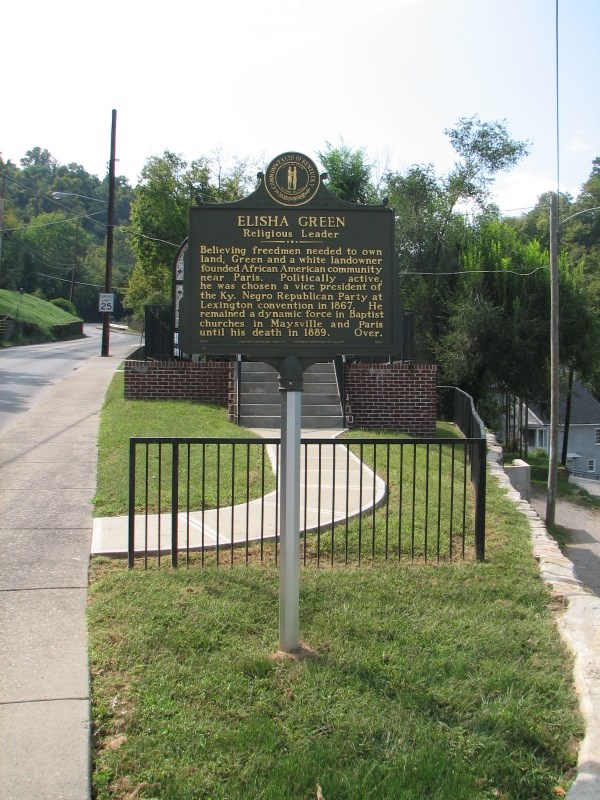 The back side of Elisha Green's historical marker. 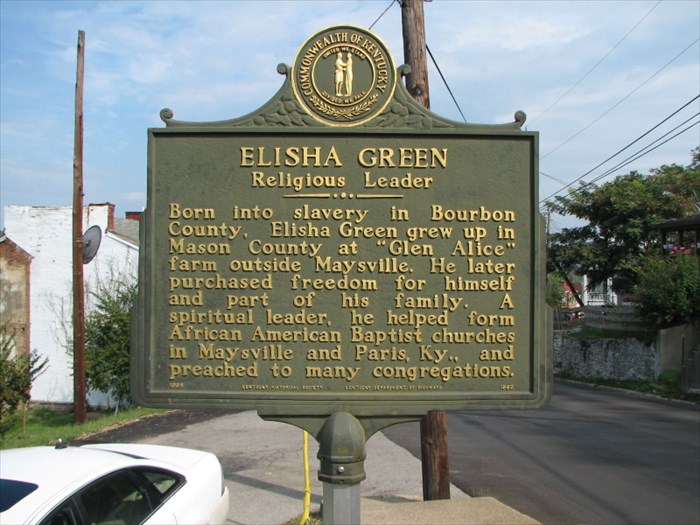 Elisha Green’s autobiography, The Life of Rev. Elisha W. Green, was published in Maysville in 1888. The autobiography is a collection of varied incidents, many of them related to his involvement with the church. 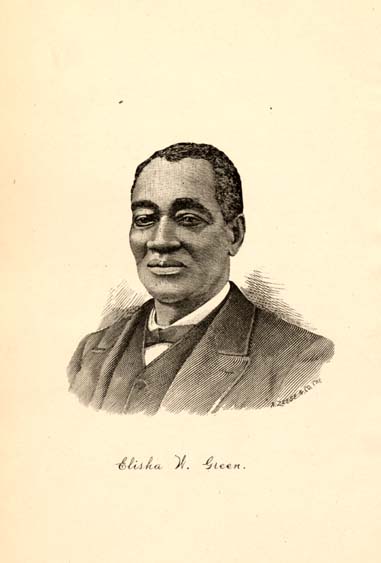 Elisha Winfield Green was born around 1818 in Bourbon County, Kentucky, near the town of Paris. Records of his exact birthdate remain unclear as the record book of Green’s birthdate was burnt early in his childhood. After the age of ten, his mother and sisters were slaves, as he was, of the Dobbyns family of Mason County. According to Elisha Green, which proved somewhat ambiguous, he was put up for sale at the age of ten, he either remained a slave to the Dobbyns family or was again purchased by that family. Green learnt how to read by studying a Bible while hiding in the third story of the Dobbyns house, and of learnt to write from nine-year old Alice, John Dobbyns's daughter. Green married another slave, Susan Young in 1835. However, Elisha Green moved to nearby Maysville, Kentucky, in 1838 with his new master, John Dobbyns, while Susan remained in Mayslick, thirteen miles away. Dobbyns allowed Green considerable freedom of movement. This allowed Green to cross the Ohio River often to preach for funerals and other occasions. However, many people along the way would question his movement and status as a slave or free-person, and often individuals would refuse to help him for fear of penalty under the Fugitive Slave Law. He was stopped many times both before and after purchasing his freedom. "I will say that I was more of a slave after I bought myself than before," Green explains. "Before this I could go many places without interruption, but when I became a freeman I could not cross the Ohio river".

In 1845, the white Baptist church of Maysville authorized Green to "exercise his gifts" as a preacher "in public before the colored population". He had previously been sexton, (a person who looks after a church and churchyard, sometimes acting as bell-ringer and formerly as a gravedigger) of the white Baptist church, performing maintenance and other odd jobs for the community. He relished this opportunity. Green was ordained two years later in 1847. A year later, in 1848, he founded First African Baptist Church of Maysville and then the First African Baptist Church of Paris, Kentucky, in 1855. Green would act as pastor at each church, bridging the gap between the two with a forty-five minute train ride. Many of the whites in town thought Green was not capable of managing the ordinances and other pastoral duties of the church more than to preach. However, Green’s resolve proved immense as he “would not submit to their opinions”, and proved otherwise. Elisha Green took great pride in serving the church. Green helped to organize the Convention of Colored Ministers of the State of Kentucky in 1865, which began the work of founding a college to educate Black ministers.

Green seems to have purchased his own freedom at some point between 1845 and 1855, but he does not describe the circumstances of the purchase. Green and his wife, Susan Young, endure great pain as several of their children were sold into slavery right before their eyes. Several are sold locally, however, Green recalls the agony of watching his son being taken to the south to be sold, tied to the outside of a coach with no outer clothing despite the December chill. Despite his best attempts, Green could not stop the sale, and never again sees his child. In 1858, he was able to purchase the freedom of his wife and two of his children for $850 with the help of thirteen members of the white Baptist church.

Elisha Winfield Green is, perhaps, most well-known for winning an assault and battery suit against two white men in 1883. As the story goes, Green, an elderly and respected church leader at that time, was on a train traveling to Paris from Mayfield, Kentucky. Reverend G.T. Gould, President of Millersburg Female College, boarded the train with a party of students and staff. Gould demanded that Greed give up his seat, to which Green refuses. Green describes this incident in his autobiography and explains that he would have given it up had Gould asked him "like a gentleman". Gould and another white man attack Green. He suffered injuries to his head and hand in the skirmish. Green does not pursue criminal charges, however, he does file a successful civil suit. The all-white jury follows the recommendation of the presiding judge and awards $24 of the $1000 sued for. This result demonstrated a willingness to take lawsuits brought against whites by Black litigants seriously, while underscoring the notion that even if it was lawful for a Black passenger to refuse to yield his seat to a white passenger, it was socially unacceptable. Following the events in the train car and trial, newspapers overwhelmingly praised Green's character and expressed contempt for Gould's behavior.

Elisha Winfield Green died in or near Maysville in 1893.