Sugar Ray Robinson is widely regraded as one of the greatest boxers in the history of the sport and often ranks as the top-rated boxer polls conducted by ESPN, the Associated Press, and The Ring. His career inspired the creation of the "pound-for-pound" ranking system. He is also known as the innovator of the modern "entourage" that often accompanies leading athletes. 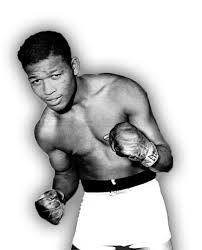 Originally born as Walker Smith Jr., Robinson attempted to become a boxer at the young age of 16. He was turned away though because he didn't have an AAU membership card, which wasn't possible to obtain unless you were at least 18 years of age. He managed to get around this rule by giving the birth certificate of his friend Ray Robinson, who happened to be over the age limit required to get an AAU card. During one of his early fights, a lady told him he was "sweet as sugar." After that encounter, Sugar Ray Robinson was born.
Early in his career, Robinson was inducted into the military with Joe Louis, and would serve the military men by putting on exhibition fights for the soldiers. He often found himself in trouble though because he had a hard time dealing with the military's higher ups and often refused to fight if African-American soldiers couldn't watch. After falling down a flight of stairs, he was discharged from the army and labeled by many to be a deserter; he would try to fight this label because he felt it wasn't an accurate account of the things that happened to him while in the arm forces.
Robinson continued his streak of not obeying others when he refused to go along with the boxing controlled Mafia's plans to stage fights. As a result, he was kept from competing for the Walterweight title for many years. He would later win the title from Artie Levine though. One of his biggest moments of his life came from his title defense against Jimmy Doyle. Robinson had a dream he was going to kill Doyle in the fight the night before, but happened to be talked into the fight by a priest that same night. Unfortunately for Doyle, Robinson's dream came true. He knocked Doyle out in the eighth round of the fight, which resulted in his death later that night. After struggling with the weight limit of the Welterweight division, Robinson jumped up to the Middleweight division, which he would also go on to win the title of during his time in that division.
Robinson's style of boxing is perhaps what many remember him for most though. He was as fluid as a boxer as anyone before or after him. He possessed a quick jab and knockout power that was unique. Many said he could deliver a knockout blow going backwards. His skill was so great, many felt it was unfair to measure his legacy to those of the heavyweight class because they would always have an advantage with their weight over Robinson. As a result, the boxing world created the pound for pound rating system to measure Robinson against those in heavier weight classes. It should come as no surprise then that he is ranked as the top pound for pound boxer in history by everyone. His flamboyant style also led to the creation of the word entourage in the use of modern sports.