Erected by the state of Mississippi, the Civil War monument pays tribute to the service of African American soldiers and the experience of formerly enslaved persons during the war. In this monument, a wounded Black soldier is aided by a member of his unit and a local field hand. The sculptor depicts the field hand as looking backward, a reflection upon the history of slavery. Meanwhile, the soldier looks forward, a reference to freedom following the Union victory that over 200,000 African American soldiers helped to secure. The monument pays tribute to soldiers of African descent who participated in the Battle of Vicksburg and is located in Vicksburg National Military Park. Between May and July 1863, Union troops attempted to take the town that was a strategic stronghold in Mississippi. Vicksburg was the final major fort holding the Mississippi River that was controlled by the Confederacy. The victory by Union forces combined with the victory at the Battle of Gettysburg was the turning point in the Civil War. Casualties were estimated at around 37,000 total.

The African American Monument at Vicksburg Battlefield was built by the city of Vicksburg and the state of Mississippi and dedicated in 2004. 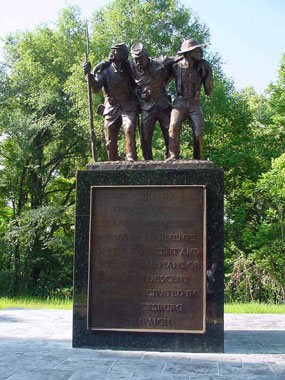 In May of 1862, General Ulysses S Grant had won a series of battles south of the town of Vicksburg. This caused Confederate commander John C. Pemberton to retreat into the city stronghold of Vicksburg. The town featured a perimeter stretching six and a half miles with many gun pits, forts trenches, redoubts, and lunettes. Pemberton commanded 18,500 troops with the heavily fortified city, while Grant’s forces numbered 35,000 with more troops coming.

Grant ordered two assaults on the fortified city. The first on May 19th was easily repulsed by the Confederate troops. Heavy losses by Union troops caused the morale of the army to decrease. On May 22nd, Grant ordered a second assault. This assault started with a heavy bombardment on the Confederate stronghold followed by attacks along a three-mile stretch. This attack was also repulsed with more casualties as a result. The failing assaults on the entrenched Confederate troops led to Grant deciding on a siege of the town.

Grant’s army began to dig “ditches” in late May of 1863. Confederate forces began to search for a way to escape the town. Pemberton decided to attack Grant’s supply line at a place northwest of Vicksburg at the Battle of Milliken’s Bend. A small force of untrained African American troops guarded the railroad line. Confederate forces attacked on June 6th but were repulsed by the African American troops. Following the small confrontation, Grant praised the African American troops by saying, “the sentiment of this army with regard to the employment of negro troops has been revolutionized by the bravery of the blacks in the recent battle of Milliken’s Bend.”

In June of 1863, Louisiana troops across the Mississippi tried to help cut the siege with small engagements. One such engagement was on June 29th when Confederates attacked a plantation that was a training center run by former slaves. The Confederate troops captured over a hundred former slaves. These small encounters, however, didn’t help to lift the siege and Pemberton surrendered on July 4th, 1863. The Confederacy was therefore cut in two with the control of the Mississippi River under the control of Union forces. A Union victory at the Battle of Gettysburg the day before combined with the Union victory at Vicksburg caused a turning point for the rest of the war.