The Pythian Home is an historic, now privately owned house in Springfield, Missouri located directly west of Evangel University. It was built in 1913 and designed by architecture firm Smith, Rea, and Lovitt in the Late Gothic Revival style. Given its fortress-like appearance, it is also known as the "Pythian Castle." Its name is associated with the statewide charitable activities of the Knights of Pythias, a fraternal order which originated in 1864. It was placed on the National Register of Historic Places in 2009. It is open for daily tours and can be rented out for events. 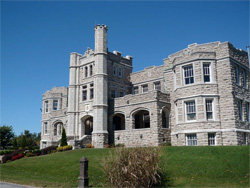 The Pythian Order was founded during the Civil War as a charitable organization. The numbers of members grew significantly during the decades following the war. Construction for the Pythian Home began in 1911 and the home was finished two years later. It served as a home for needy Pythian members, widows and orphans from 1913-1942. During World War II, it was used as a service club for people stationed at nearby O'Reilly General Hospital. After the war, it was used as an Army Reserve Center for a number of years. The U.S. Army sold the building in 1993 and has been privately owned ever since.

Open for daily tours-please call ahead