The Donner Party is one of America's most famous tragedies and most gruesome stories. In 1846, a wagon train traveling overland from Springfield, Illinois, to California was delayed by misleading information and internal conflict. The group became trapped in the Sierra Nevada mountains by an early snowfall, where they faced starvation and some resorted to cannibalism. Today their former campsite is a state park offering outdoor recreation. A monument and visitor center mark the site of their winter camp.

The statue located in the Donner Memorial State Park. 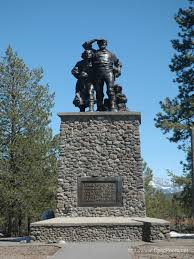 Plaque at base of monument 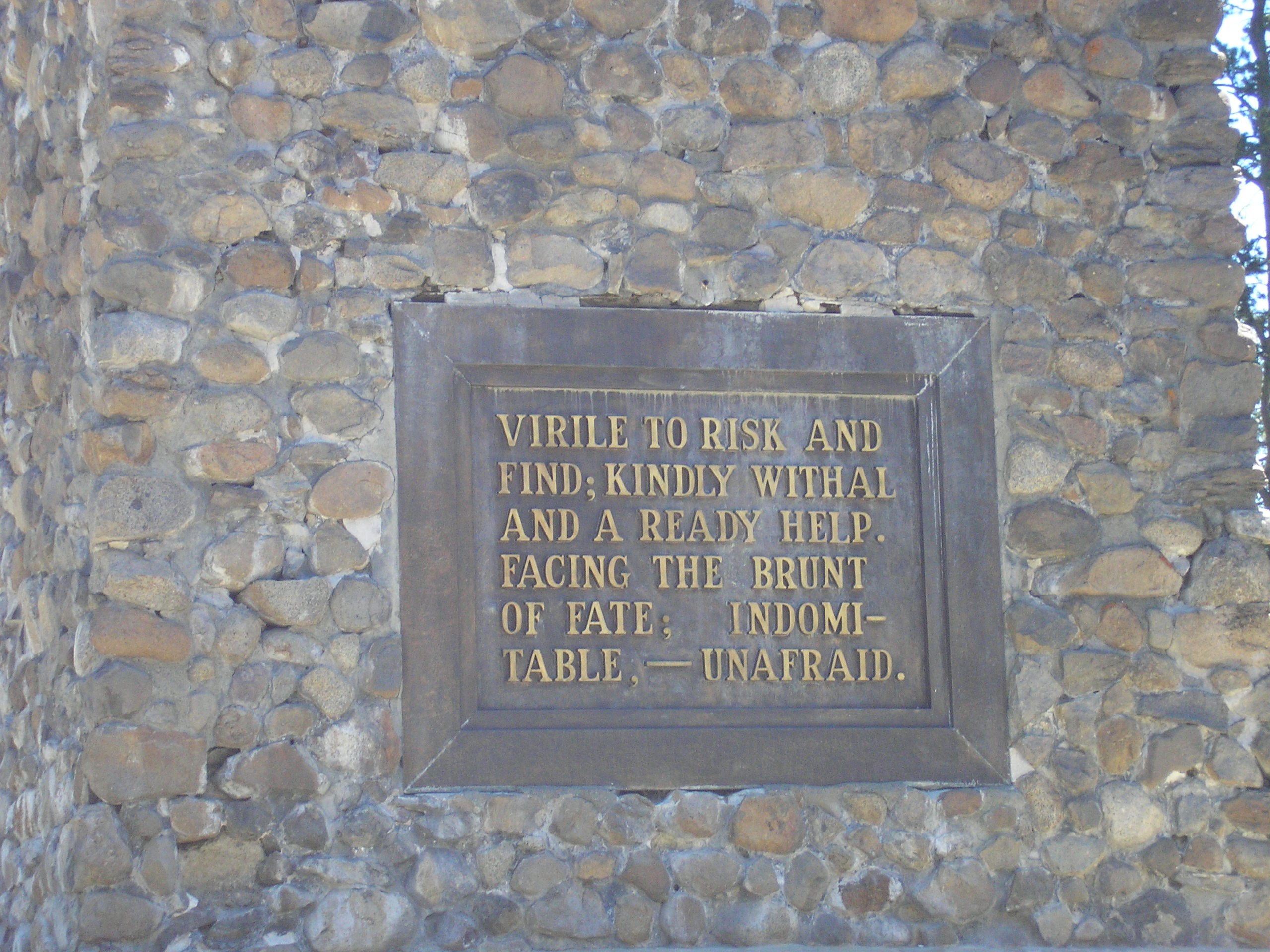 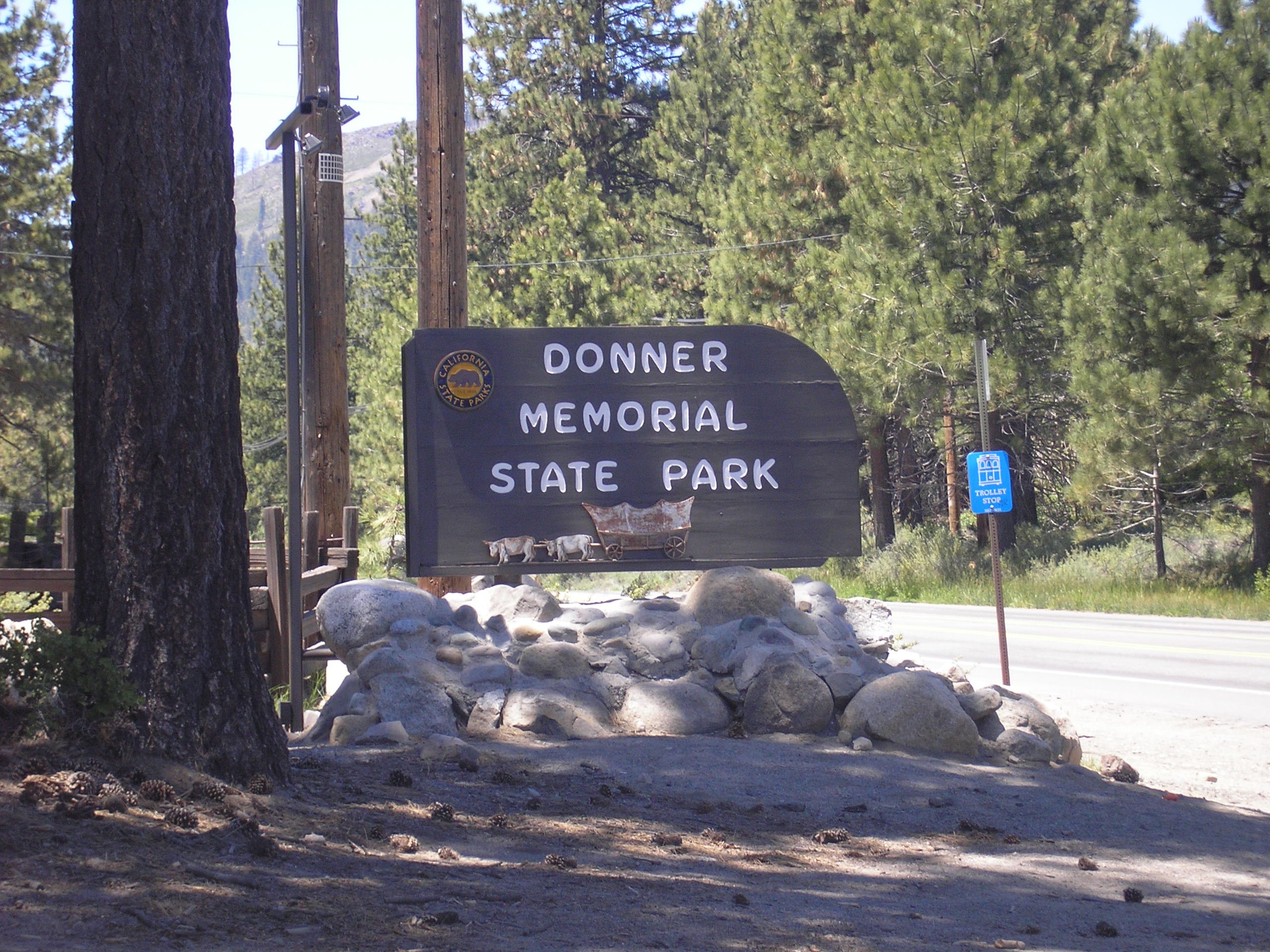 The group that became known as the Donner Party was led by James Frasier Reed. The wagon train was well supplied when they began their journey along the Platte River Road. Reed brought a specially outfitted wagon with a cook stove and feather bed for his ailing mother-in-law, which later became known as “the prairie palace.”1

Reed relied on an untested short cut that was supposed to save travelers time. The wagon train split at Little Sandy River, with one group taking the safer well-traveled route, and the other—led by George Donner—taking the so-called Hastings Cutoff. The Donner group struggled through deserts and unmarked routes along the path promoted—but never tested—by Lansford Hastings. As trail conditions worsened, the emigrants argued constantly. One man in the group killed another, and an older man was left alone to die along the trail.

An early snowstorm trapped the group in the High Sierra near present-day Truckee for the winter.  Attempts to escape failed in more than 20 feet of snow. The group faced starvation in the deep snow. They consumed their oxen and horses, dogs, and then resorted to eating field mice and pine bark. Out of desperation, a few even ate the flesh of their fallen fellow travelers. In the end, 41 out of 89 emigrants died before they were finally rescued by Miwok Indians and California settlers.

Today, Donner Memorial State Park is located where the Donner Party camped. A new Visitor Center opened in 2015. Visitors can learn about the Donner Party, overland migration, local Native American peoples, the construction of the first transcontinental railroad in nearby Donner Summit, and the history of the skiing industry. A nearby nature trail includes a stop at the Murphy family campsite from the winter of 1846-47. The park also offers water sports and camping in summer, and cross-country skiing and snowshoeing in winter. Just outside the park, hikers can explore the Emigrant Trail, which follows emigrants’ route crossing the summit into California, or can connect with the Pacific Crest Trail.

A 1918 Pioneer Monument stands outside the park’s Visitor Center. In the early 20th century, pioneer monuments were meant to commemorate those who brought white civilization to the Wild West. The Donner Parlor of the Native Sons of the Golden West was determined to erect a monument to their namesake Donner Party in Truckee Pass. The ugly story that made the Donner Party famous made its commemoration complicated. They initially intended to erect a simple commemorative shaft. That idea soon gave way to calls for a heroic statue in keeping with recent statues placed in San Francisco and elsewhere.2 But their efforts immediately raised questions about how to celebrate white pioneers while commemorating the infamous Donner Party’s suffering.

Those questions sparked disagreement between artists and the monument’s sponsors. Dr. Chester Warren Chapman, a member of the Native Sons’ Grand Parlor in nearby Nevada City, asked San Francisco sculptor Douglas Tilden to design the Donner Party monument. Yet the Native Sons could not accept Tilden’s vision of a “lone pioneer figure” on top of a pedestal, surrounded by “a dozen or so figures sitting, lying, creeping in different attitudes from cowering anxiety to resignation of death.”3 Instead, most white Californians imagined the California pioneer as “the seeker for gold, the argonaut, [who] was all conquering, all triumphant, sure, able, resourceful, unbaffled by storm or stress.”4 Why, then, would they construct a monument to the misery—let alone the cannibalism—of the Donner Party?  The San Francisco Call insisted that the Donner Party members were “martyrs,” and asked its readers,

[H]ad those victims not been sacrificed on the snow white altar of the Sierras, as the first born emigrants into the fair land of California, how many thousands might have perished in other winters?5

The Native Sons held a massive barbecue in honor of those so-called martyrs. They offered an abundance of food in sharp contrast to the Donner Party’s starvation and cannibalism to raise funds for a memorial.

The Native Sons believed that Tilden’s proposed sculpture placed too much emphasis on the Donner Party’s suffering. Instead, they insisted on a generic pioneer figure whose victory over adversity was never in question. Breaking their ties with Tilden, in 1913 the monument committee selected John McQuarrie’s depiction of a pioneer family: a bold pioneer man gazing westward, supporting his wife and baby with his strong right arm as their young child clings to his boots. The president of the University of California composed the monument’s inscription: “Virile to risk and find; kindly withal and a ready help. Facing the brunt of fate; indomitable—unafraid.”6 Only the 22.5-foot base (marking the depth of the snowpack during the Donner Party’s entrapment) hinted at the tragedy on the site.

Newspapers from San Francisco to Deadwood, South Dakota, excitedly followed the monument’s progress and cheered the heroic depiction of California pioneers. However, some Californians felt that the completed monument failed to sufficiently honor the suffering of the Donner party.  According to the Oakland Tribune, “There was considerable comment among delegates [at the dedication] that the pioneer monument . . . contains no mention on either tablet of the Donner party.”7 But the McQuarrie design, which “honor[ed] the pioneer women of California no less than the pioneer men,”8 helped to cement white westerners’ depictions of pioneer men and, increasingly pioneer women, for future monuments.

"The Tragic Story of the Donner Party." Legends of America. Accessed April 18, 2015.  http://www.legendsofamerica.com/ca-donnerparty.html.