The Eureka represents a historic class of wooden-hulled ferryboats and incorporates design elements from her original construction in 1890 and alterations in 1922. Eureka was originally built to carry ten railroad freight cars and five hundred passengers. 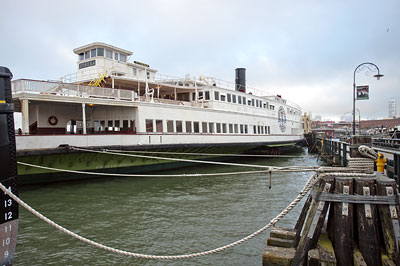 Eureka is a historic steam ferryboat from the early twentieth century located in Hyde Street Pier as part of an extension National Maritime Museum.  The ferry was built in 1890 and was meant to carry ten railroad freight cars and five hundred passengers.  She was used during the first World War to carry freight cars for the United States Railroad Association.  Eureka catered to the ever evolving climate of early American colonial and industrial periods.  During Eureka's lifespan there have been many restorations that have increased her passenger carrying abilities. In 1963, she was deeded to the California State Park system, and in 1977 was transferred to the National Park Service where she remains on display.