The "Big Four House" - Birthplace of the Central Pacific RR

A present-day view of the "Big Four House," which was painstakingly disassembled, moved several blocks to its current location, then reassembled and restored to its 1862-1878 appearance in the 1960s. 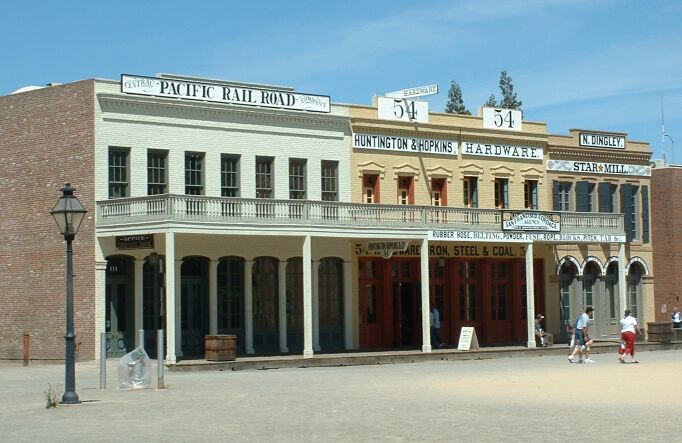 An 1874 advertisement for goods offered by the Huntington & Hopkins company. 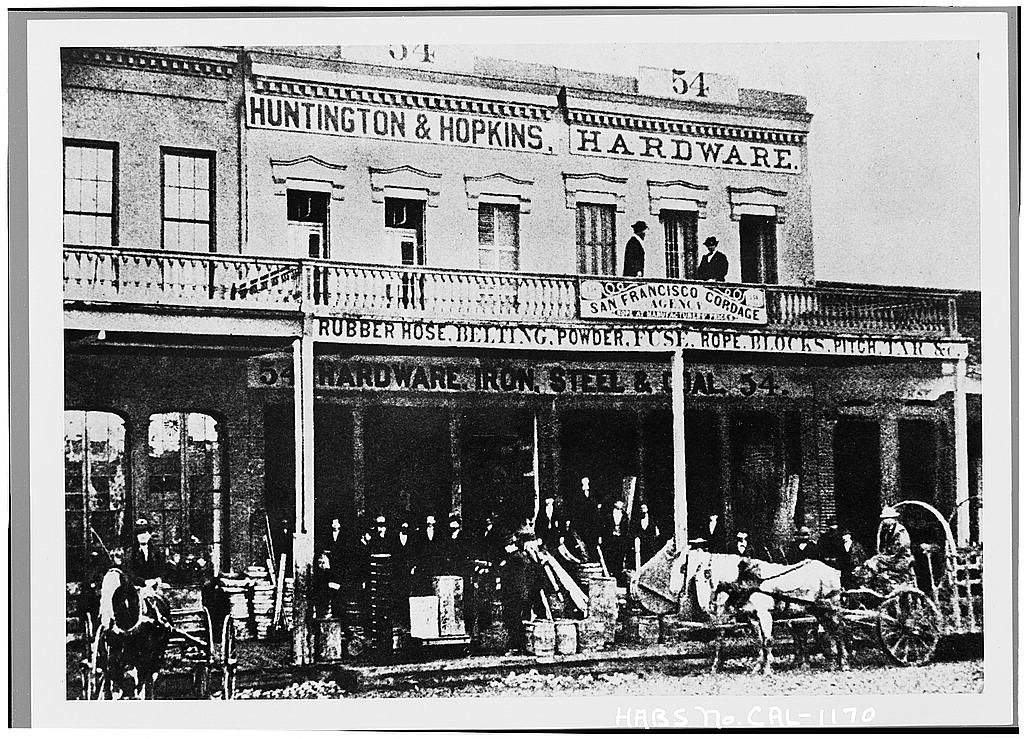 After the Central Pacific moved its headquarters to San Francisco, Huntington & Hopkins remodeled the building in 1879--adding ornamentation to the facade that survived well into the 20th Century. 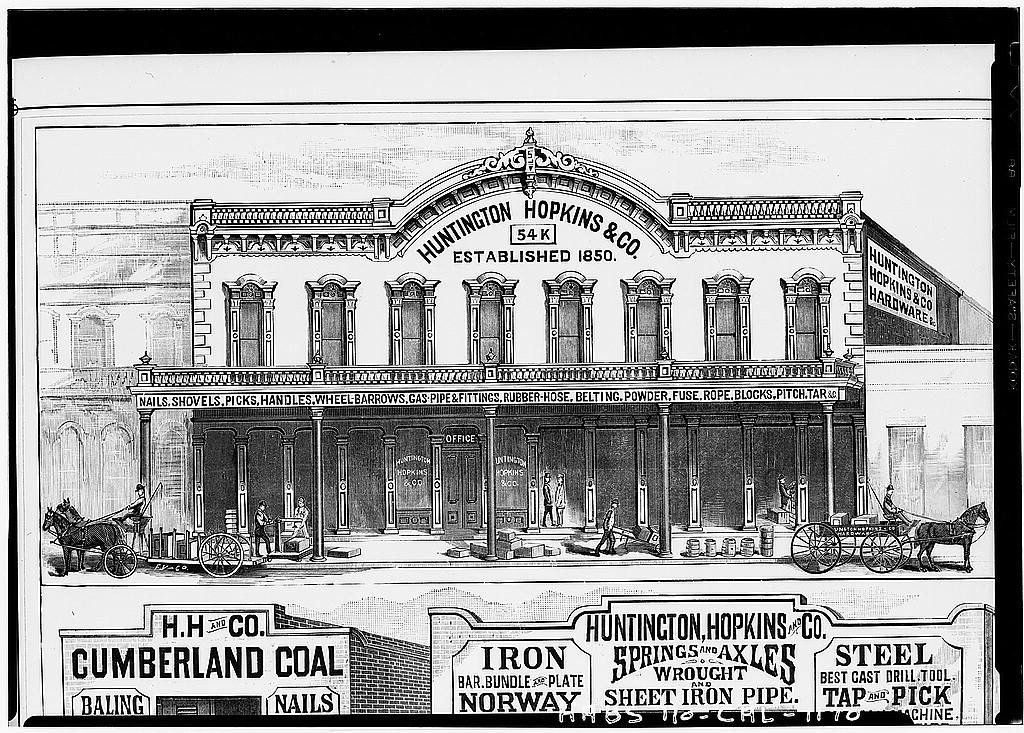 No longer a hardware store, the Big Four House retains its post-1879 ornamentation in this 1935 photo. 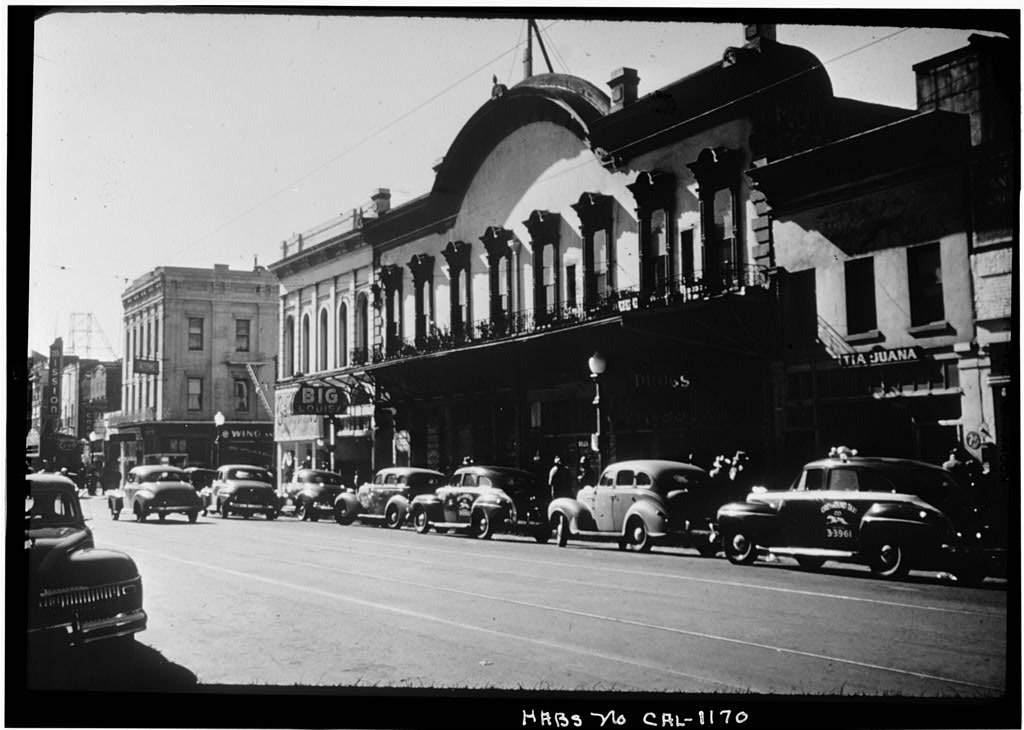 The much-dilapidated structure in 1962, now bereft of the 1879 architectural flourishes. It would be disassembled and moved 4 years later as part of a large-scale redevelopment of the entire neighborhood. 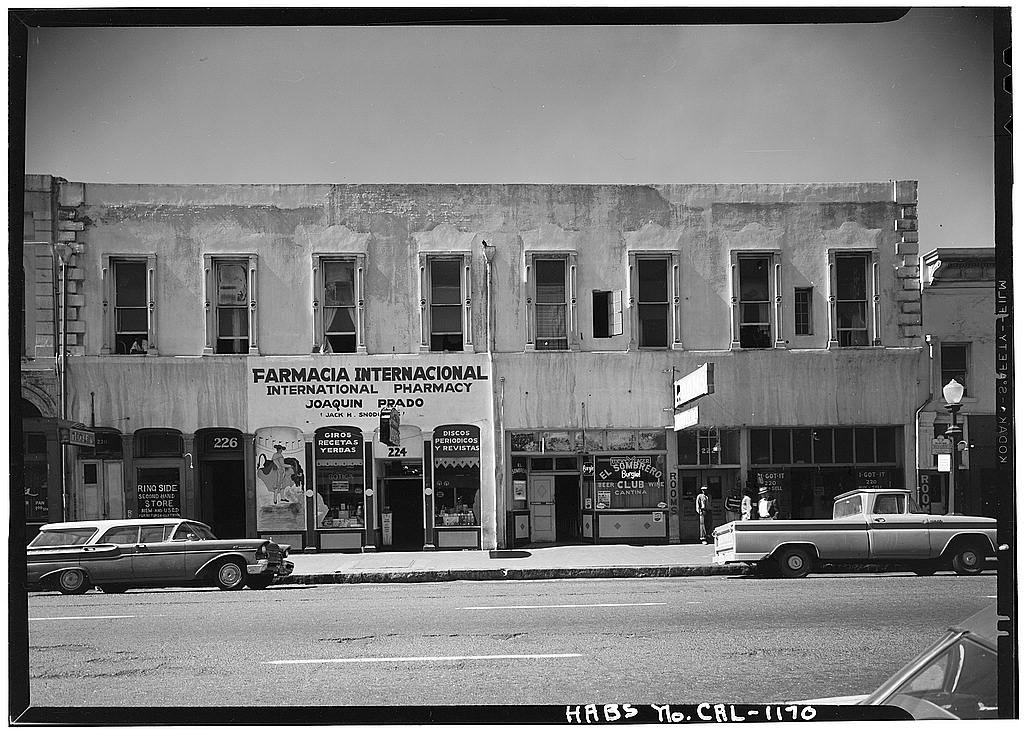 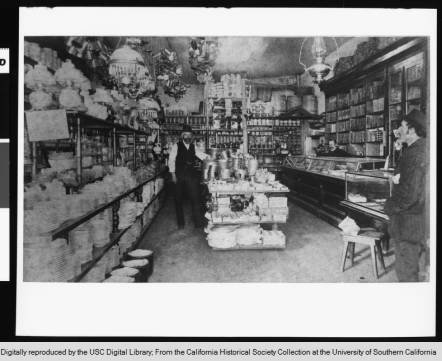 The Big Four: Leland Stanford--perhaps the most well known of the group. One of California's earliest captains of industry, also considered by some to be a "robber baron" who ruthlessly exploited working classes and government connections. 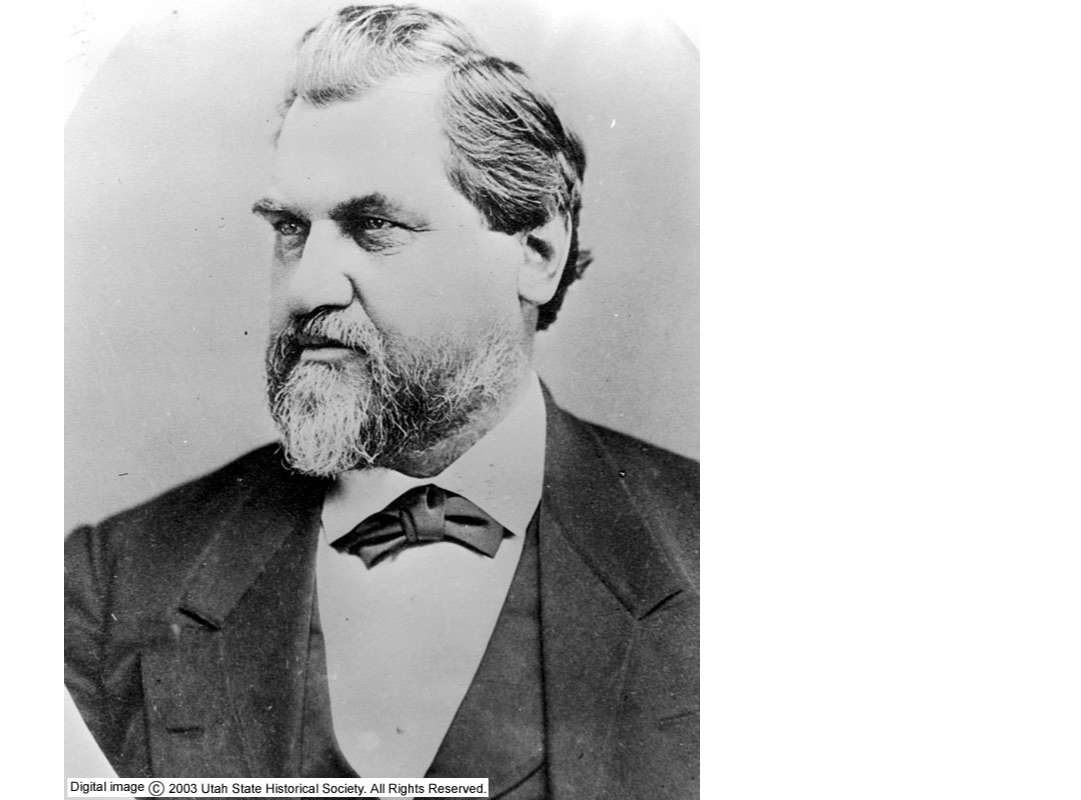 The Big Four: Charles Crocker, the only one of "The Associates" who did not own one of the buildings that later became known as the "Big Four House." 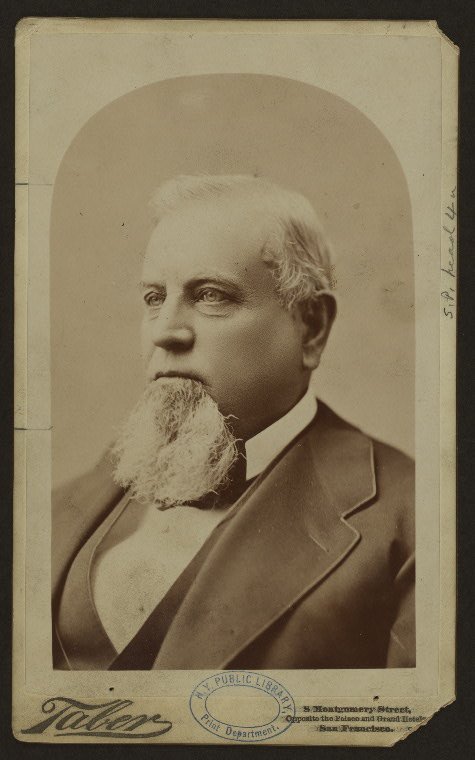 The Big Four: Lesser known today than Stanford, C.P. Huntington was nevertheless a powerful businessman in his own right, who later forced Stanford out of his presidency at the Southern Pacific Railroad. 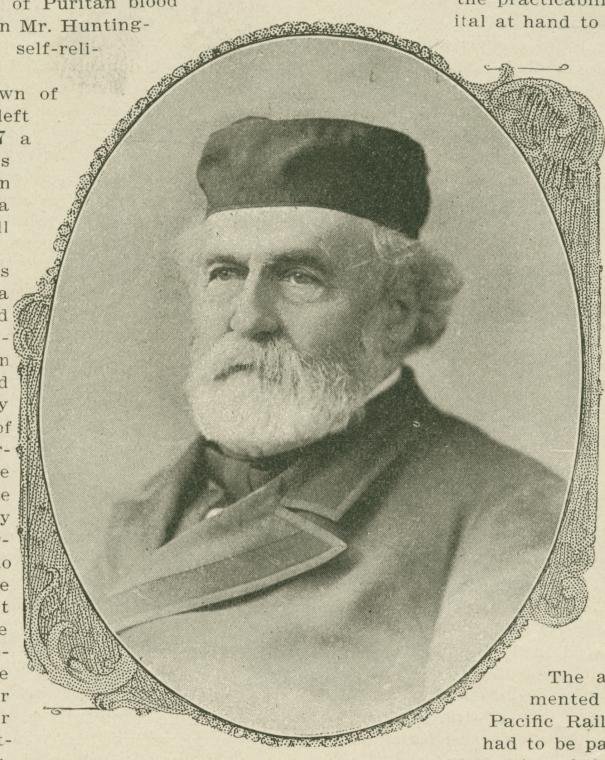 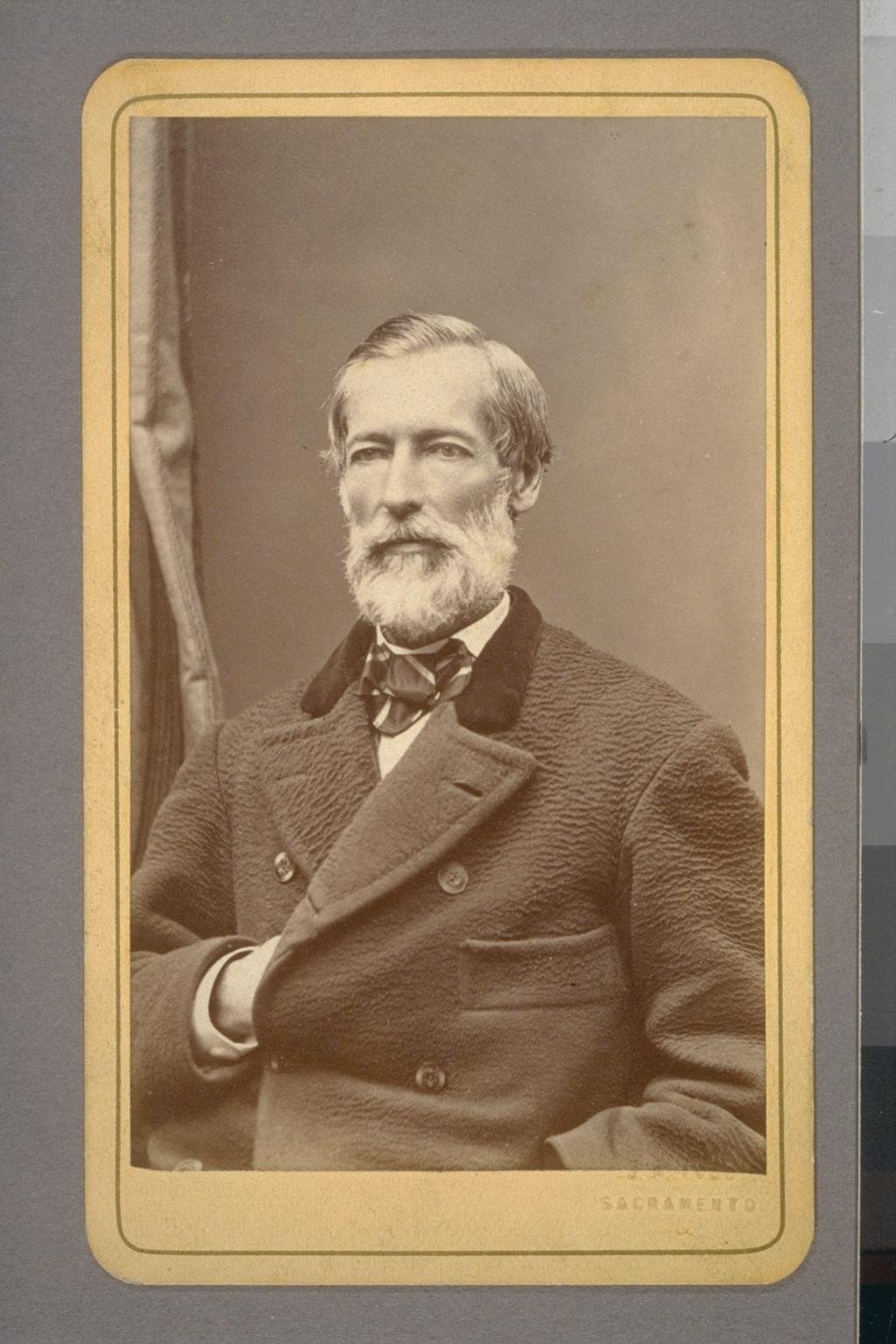 "The Last Spike." An 1881 panting of the 1869 Golden Spike being driven to officially complete the Transcontinental Railroad. The painting notably omits any Chinese-Americans, who comprised most of the Central Pacific's labor force. 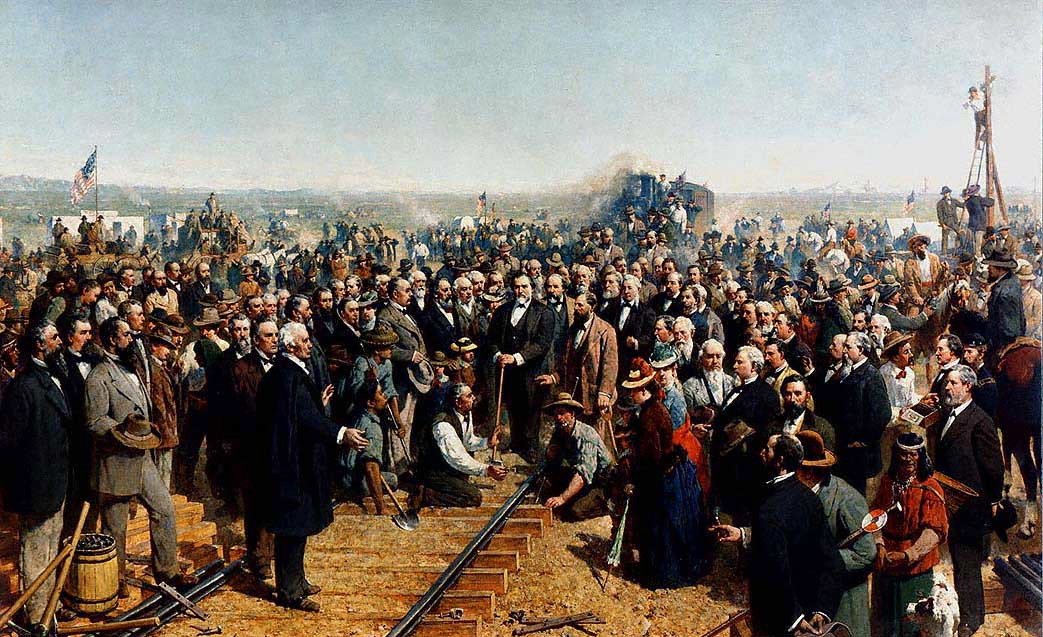 The "Governor Stanford," Central Pacific's first locomotive--built while Leland Stanford was serving as governor from 1862-63 (California governors only served 2-year terms at the time). The locomotive resides in the nearby Railroad Museum. 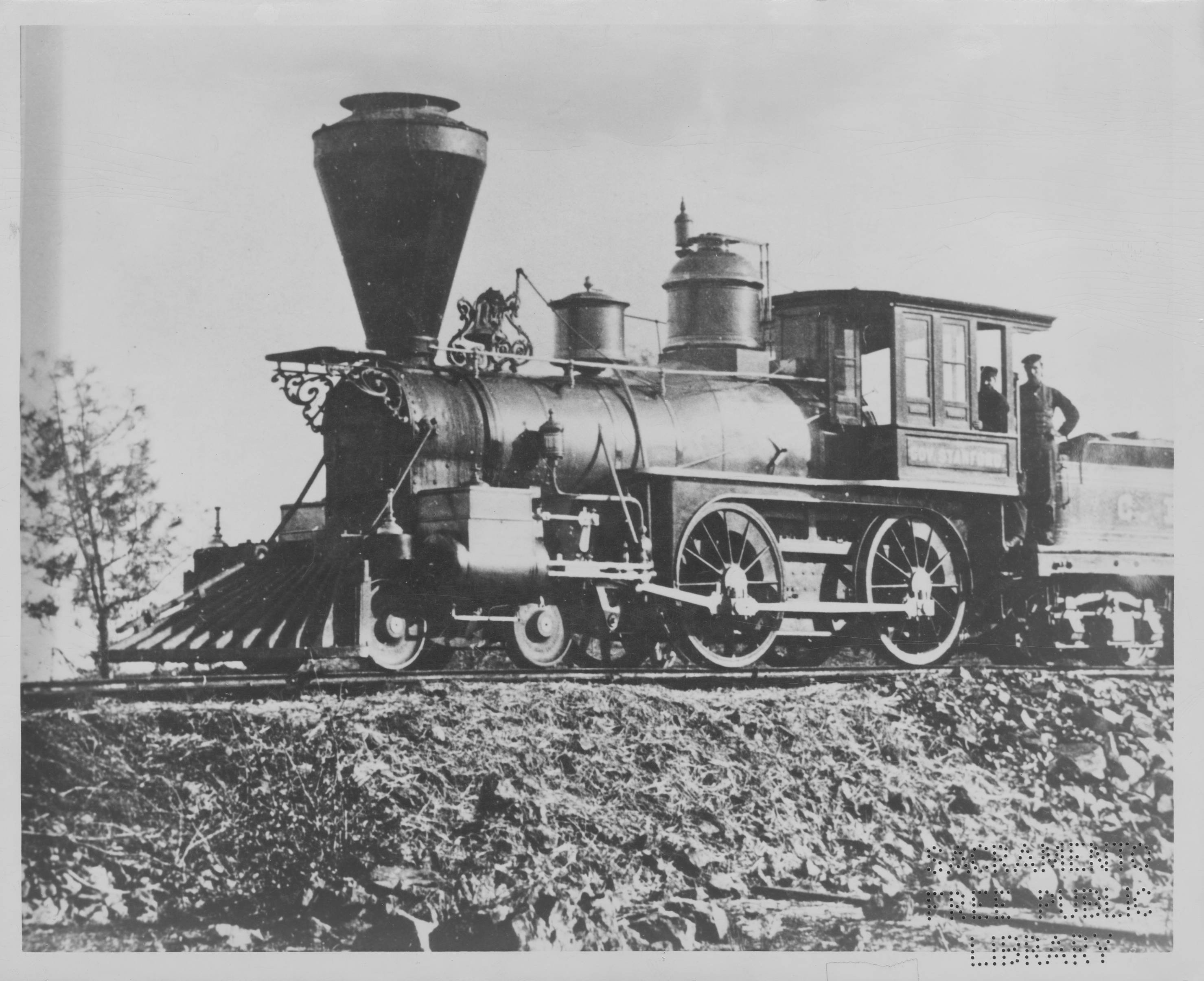 Sitting in what is now the Old Sacramento National Historic District and the Old Sacramento State Historic Park, the Big Four House was originally three separate buildings: the Stanford Building, the Huntington & Hopkins Building, and the Miller Building. Built during the construction boom that followed California's accession to statehood and the selection of Sacramento as the new state's capital in 1850, the three buildings did not initially share a common purpose.

Josiah Stanford, eldest of six New York brothers, moved to California and built Stanford Hall at the site to house his burgeoning import business. It was one of the few buildings nearby to survive the floods and fires of the early 1850s--the Huntington & Hopkins and Miller buildings, in fact, had to be rebuilt in 1852 after burning down. The large second floor of Stanford Hall, being the only community hall to make it through the fire, became the default meeting place of the Masons and Odd Fellows. Follwing the fire in 1852, Leland became the last Stanford brother to arrive in California (also a result of fire--his law practice in New York burned down that year). He took over management of the Sacramento branch as Josiah expanded his operations.

Meanwhile, Collis P. Huntington had run a thriving hardware business supplying local miners since the Gold Rush of 1849. Though his building next to Stanford Hall burned in 1852, he rebuilt quickly and found a steady business partner when he was joined Mark Hopkins in 1855. Huntington and his wife initially lived on the second story while the hardware store occupied the first.

What became known as the Miller Building was occupied by a series of firms, and only owned by Morgan Miller and Company from 1855 to 1858. Another business occupied the structure (which had also been rebuilt after the 1852 fire) until 1861, when Huntington & Hopkins expanded their store into the property.

Then everything changed. In 1862 Stanford, Huntington, Hopkins, and associate Charles Crocker were persuaded by engineer Theodore Judah to invest in the western half of a transcontinental railroad, for which he’d gained authorization from Congress that year. Though later known as “The Big Four” by posterity, the group simply called themselves “The Associates” and formed the Central Pacific Railroad Company, which would be responsible for building the railroad from Sacramento, over the Sierra Nevada Mountains and all the way to Utah. There it would be joined with the railroad being built from the east coast.

The Associates had the investment capital and the means--Stanford had grown rich from his import business and the first commercial petroleum operations in California. He was also elected Governor of California in January in 1862. The other three men also had large sources of revenue to call upon, and Huntington had already been “importing” Chinese workers for various construction projects (a practice that would later land Stanford in hot water for double-talk disparaging Chinese immigrants while the Central Pacific brought thousands over to complete the railroad--by the end, roughly eighty percent of the CPRR workforce was Chinese).

The three adjacent buildings quickly became the Central Pacific’s nerve center. Though some of the store spaces remained downstairs, interior walls were knocked out and the buildings were merged together into a single office from which to manage the railroad’s business affairs. From 1862 to 1873, the hub of the most powerful railroad operation in the American West lay between the walls of the Big Four Building, with the Central Pacific’s rail terminus only a few blocks away (where it is partially reconstructed today). The nearby California State Railroad Museum today houses the Central Pacific’s first locomotive, the “Governor Stanford.”

The Transcontinental Railroad, once thought impossible, was completed in 1869. By 1873, the Central Pacific had acquired a controlling stake in the Southern Pacific Railroad, which extended their lines down California’s Central Valley to Los Angeles and San Diego. They relocated their offices to San Francisco, leaving Huntington & Hopkins to expand their original hardware store to fill the entire building. Extensive remodeling took place in 1878. The building remained the Huntington & Hopkins hardware store into the 20th Century, though it was later sold to various businesses and declined along with the neighborhood as technological advancements chipped away at the importance of the railroad.

By the 1960s, the building little resembled its original self. It was nevertheless designated a National Historic Landmark on July 4, 1961. It was painstakingly deconstructed in 1966-67 and moved to its current site, where the process began of reassembling and restoring the building to the appearance of its Central Pacific days. Today it serves a role as part of the living history of Old Town Sacramento, and the interior of Huntington & Hopkins has been furnished to resemble a 19th Century hardware store. The second floor is home to the Railroad Museum Library, "North America's finest railroad-only reference library."