Charles Aycock served as governor of North Carolina from 1900-1904. Aycock is best known as a proponent of public education, and during his administration, communities around the state created over a thousand schoolhouses with local and state revenue. Aycock's memory as a progressive reformer is marred, however, by his explicit and frequent endorsement white supremacy. As a politician and as governor, Aycock called for taking the vote away from African Americans despite the 14th and 15th Amendments that guaranteed equal suffrage for white and black men. And while he supported the construction of schools for African Americans, Aycock did not believe that these schools should teach liberal arts and other advanced subjects. These small and under-funded schools, Aycock declared, should provide the kind of curriculum that "fit.. the black race... into a subordinate role." The birthplace includes a historic rural schoolhouse that was constructed in 1893 and moved to this site. The historic park also interprets the experience of frontier settlers like the Aycock family with a 19th-century farmhouse. Visitors can tour the farmstead and see a replica of a smokehouse, farm implements, outbuildings, and a corn crib. The historic park was created shortly after World War II and reflect's the era's faith in education as the path to success. As of November 2016, the official webpage for this historic site fails to mention Aycock's views on race or his support of laws aimed at disfranchising black voters. However, many other websites maintained by the state and North Carolina and its public universities include detailed explorations of Aycock's views and actions regarding race, public education, and other matters that offer windows into understanding the state at the turn-of-the century.

Aycock is best-known as an advocate of education, but he was also instrumental in taking voting rights away from African Americans in North Carolina. 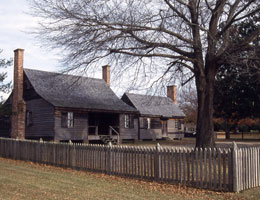 Charles Aycock was only 41 when he won election as governor in 1900. 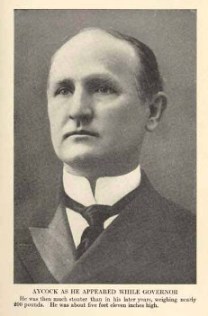 Statue of Aycock at the North Carolina State Capitol. Numerous educational buildings were named after Aycock- a decision that is being reconsidered throughout the state. 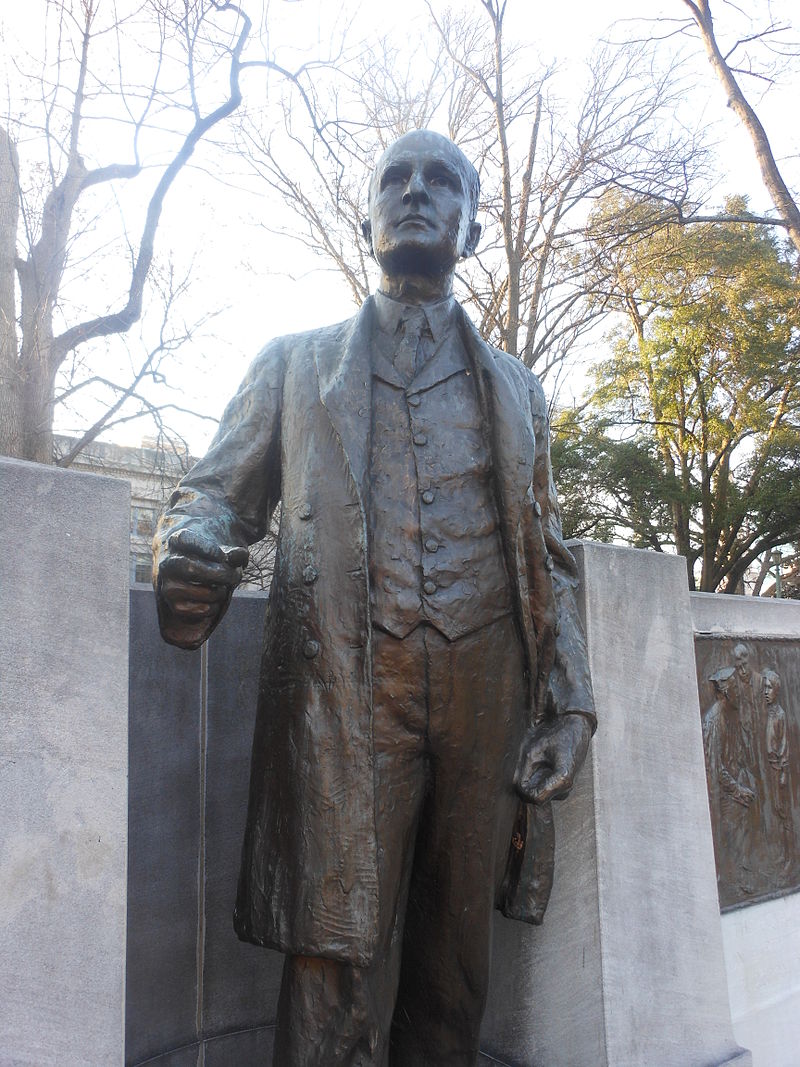 This marker, which says nothing about Aycock's support of white supremacy, was dedicated in 1957 and reflects the interpretation of many historians at that time. It is located on the corner of Highway 117 and Aycock road. 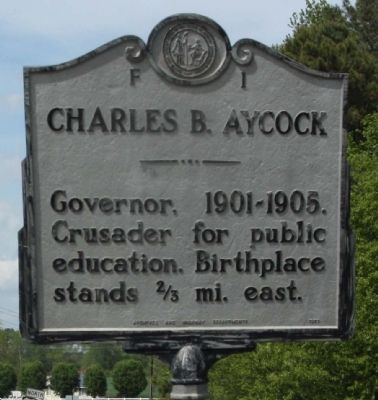 Charles Aycock was born to Serena and Charles Brantley Aycock on their farmstead outside the town of Nahunta (known as Freemont today) on November 1, 1859. The Aycocks prospered, growing their farm to include about a thousand acres by the 1870s. This wealth supported the ambitions of young Charles, who would graduate from UNC Chapel Hill in 1800 and establish a law practice in Goldsboro. After rising through the Democratic Party ranks, he served as governor in 1900-at the young age of 41. Aycock would have likely won election to the U.S. Senate, but he died on April 2, 1912--shortly after announcing his intentions to run for office.

To understand Aycock's legacy, and his popularity with white voters at the turn of the century, one must understand that his governorship followed a brief period of interracial cooperation between progressive whites and black leaders in North Carolina. In cities such as Wilmington during the late 1890s, open-minded whites formed "fusion" tickets with African American leaders that challenged the one-party rule of the state's Democratic Party. Black and white voters came together briefly to support a ticket divided between the races who were united behind a progressive reform agenda that included more funding for schools. Aycock rose to fame in the statewide elections of 1898 by giving a number of inflammatory speeches calling for the disfranchisement of black men. In the election of 1900, he and other Democrats won election by appealing to the racial fears of the state's white voters.

While governor, Aycock moderated some of his rhetoric regarding African Americans, adopting more of a paternalistic tone that mirrored some of the views of planters who believed that slavery was a benign institution that allowed superior whites to "care" for inferior black "servants." While he refused to accommodate the calls from some to eliminate schools for African Americans, he refused to consider support for equal education. He and other North Carolina Democrats adopted a platform that included popular measures such as funding for education while maintaining the political and racial status quo. As Aycock reminded his supporters and those who believed he did not do enough to limit opportunities for racial equality, "“Everywhere and all the time we have fought for white supremacy."