Anasazi State Park Museum is a state park and museum in Southern Utah, USA. The museum and park preserve a "melting pot" of the Ancestral Puebloan and Fremont cultures. The park holds numerous cultural and state-wide events. Daily use allows hiking, archaeology, picnics, and historical tours.

One of the recreated buildings that line the park. 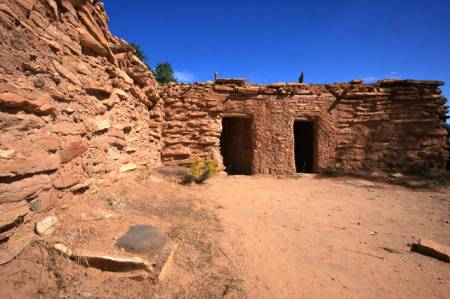 Anasazi is a Navajo word interpreted to mean ancient enemies or enemy ancestors, but is now referred to as the ancient ones. It refers to village dwelling farmers who existed on the Colorado Plateau between A.D. 1 and 1300. Most of the sites were left after A.D. 1300, but a few continued to flourish, Hopi, Zuni, and Acoma to the west, and eastern Pueblo villages along the Rio Grande River.

The Coombs Site is the site of one of the largest Anasazi communities known to have existed west of the Colorado River, and one of the very few that remain intact for viewing. The name Anasazi, describes the Pueblo culture that existed in the Four Corners area from about 1 AD to 1300 AD. This village is believed to have been occupied from 1160 AD to 1235 AD. As many as 250 people lived there.

The village is largely untouched, though there was a brief excavation during 1958 and 1959, conducted by the University of Utah as part of the Glen Canyon Dam Project. During that excavation, archaeologists uncovered thousands of artifacts, some of which are now on display. An L-shaped building has been reconstructed and can be entered into by visitors. The cluster featured open shelters for working in the shade, storage pits, and adobe pit houses large enough for five or six residents. All together, about 100 structures have been found.