American literature pioneer Ralph Ellison was born and raised in Oklahoma City, and this library is a celebration of his legacy. 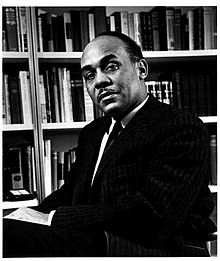 Ralph Waldo Ellison, born March 1, 2014, was raised in a working-class Black neighborhood in Oklahoma City. His parents had migrated to this close-knit Black community from Georgia and South Carolina. Lewis Ellison, Ralph’s father, was a construction foreman who eventually came to own a small ice and coal delivery business. When Ellison was three, Lewis was killed in a workplace accident. This left his young widow, Ida Millsap Ellison, to raise Ralph and his brother Herbert on her own. To support her family, Ida worked as a nursemaid, janitor, and domestic, but her avocation was social justice. Ida campaigned tirelessly for political issues, canvassing for Eugene V. Debs and other socialist candidates during elections. In the early 1930’s, Ida was repeatedly jailed for violating Oklahoma City’s racial segregation-based zoning ordinances.

Although the Ellison family had been among the poorest members of their community, Ralph Ellison had managed to attend a good school and find good mentors—both Black and white--from among the City’s most cultured and influential people. Ellison was drawn to music and literature. T.S. Elliot’s masterpiece, The Wasteland, sparked Ellison’s literary ambitions and his desire to fuse African-American folklore, language, music, and political realities with more conventional Euro-American literary forms and themes. His mastery of classical coronet was such that he was awarded a position in the music program of the legendary Tuskegee Institute under William L. Dawson. Classical training notwithstanding, Ellison always admitted that jazz music was a major love, along with the emerging audio technology enabling the masses to experience it via radio broadcast and recordings: “The great emphasis in my school was upon classical music, but such great jazz musicians as Hot Lips Page, Jimmy Rushing, and Lester Young were living in Oklahoma City....As it turned out, the perfection, the artistic dedication which helped me as a writer, was not so much in the classical emphasis as in the jazz itself.”

Lacking funds to complete his education, Ellison migrated to New York City in 1936 to earn the money he needed to finish his studies. His first job was in the YMCA, where he also began to study sculpture. In June 1937 he met his friend and mentor Richard Wright, who encouraged Ellison’s literary ambitions. Through Wright, Ellison became friends with poet Langston Hughes and the painter Romare Bearden. In between supporting himself with various jobs, Ellison became a literary critic, musician, and sculptor, and finally, author.

Politics, social justice, art, and music converged to forge a unique artistic sensibility in Ellison. It was in late 1937 after the death of his mother that Ellison began to take his writing seriously. Ellison became a contributor to the New York Federal Writers Project of the WPA, and began submitting reviews, essays, and short fiction to New Masses, Tomorrow, The Negro Quarterly, The New Republic, The Saturday Review, Antioch Review, The Reporter, and other periodicals. The Invisible Man, Ellison’s masterpiece about the disenfranchisement and disillusionment inherent in the African American experience, took seven years to write. Ellison structured his novel according to the conventions of jazz composition, with several “solo riffs” mimicking the performance of jazz improvisation. The Invisible Man was on the bestseller list for 16 weeks and won the National Book Award in 1953. Although he was a prolific literary and culture critic, Ellison did not publish more fiction during his lifetime; his masterful works Juneteenth, Flying Home & Other Stories, and Three Days after the Shooting were published after his death.