Island in the Sky Visitor Center of Canyonlands National Park is located near thetown of Moab and offers a small exhibit related to the history of the park and its ecosystem. The park was added to the NPS system when President Lyndon Johnson signed legislation creating the park in 1964. This desert park has countless canyons, mesas, and buttes by the Colorado River, the Green River, and their respective tributaries. The park is divided into four districts—Island in the Sky, the Needles, the Maze, and the rivers and each district has its own visitor center. The Island in the Sky visitor center is open daily and has exhibits, publications, videos, and information available. The Needles visitor center is also located inside the park and has exhibits, information, and publications available. The Maze district visitor center is called Hans Flat Ranger Station. Here you obtain permits for overnight trips in the Maze District. It also has some books and maps for sale. Canyonlands is a very popular recreational destination. Hikers, mountain bikes, backpackers, and ATV drivers enjoy the trails within the park. Rafters and kayakers float down the calm stretches of the Green River and the Colorado River. Whitewater rafting can also be done in the Cataract Canyon. During heavy snow years, this stretch of river offers the largest whitewater in North America.

Canyonlands National Park was established in 1964. This view overlooks the Green River. 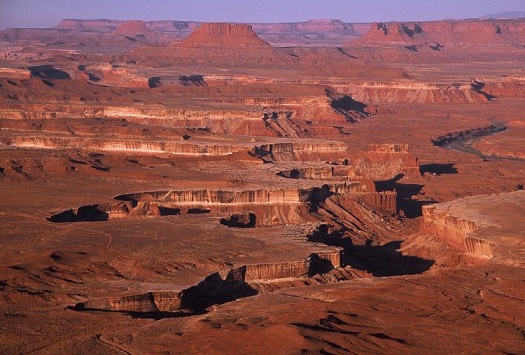 Island in the Sky District 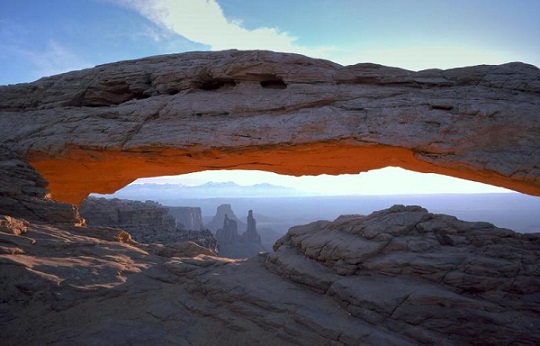 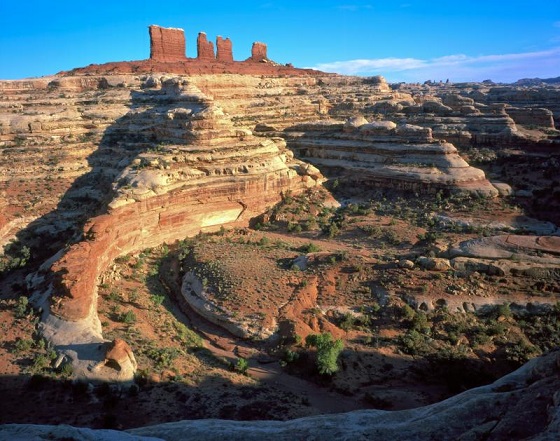 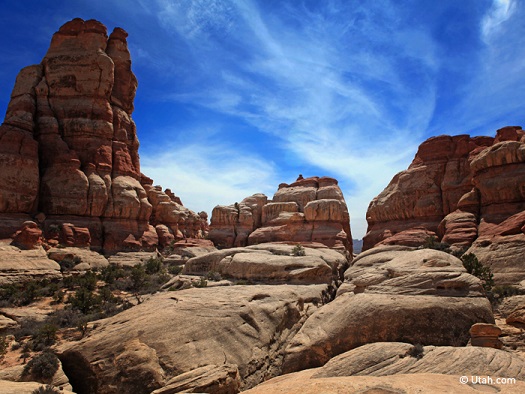 The Island in the Sky district is a broad and level mesa to the north of the park between Colorado and Green river. It has many overlooks from the White Rim, a sandstone bench 1,200 feet below the island, and the rivers, which are another 1,000 feet below the White Rim. The Needles district is located east of the Colorado River. It is named after rock pinnacles and various forms of naturally sculptured rock such as canyons, grabens, potholes, and arches. It requires long hikes to reach these arches. The Maze district is located west of the Colorado and Green rivers and is the least accessible section of the park. It is one of the most remote and inaccessible areas of the United States.

The first people first arrived in Canyonlands were nomadic hunter-gatherers who arrived 10,000 years ago. They did not leave much archaeological evidence but they did create their own style of rock art, the best of which can be seen in Horseshoe Canyon. The next people to arrive in the park were ancestral Puebloans and the Fremont culture, which developed their own style of tools, pottery, and rock art. Their areas overlapped but Fremont primarily lived in central Utah and the Pueblo in the Four Corners region (visitors should take a trip to Mesa Verde National Park to see the well-preserved cliff dwellings built by the Pueblo). The Pueblo and Fremont were the ancestors of the Ute, Paiute, and Navajo cultures that emerged later.

The first Europeans to enter the region were likely two Spanish priests who were looking for a route from New Mexico and California. In the 1800s, French and American trappers were probably the first to actually explore Canyonlands. Then in 1869, American explorer John Wesley Powell led the first expedition in the area. The first settlers were Mormons and then cattle ranchers (ranching remains ongoing today. Mining started in the 1950s when it was believed that uranium deposits were located in the region but none has been found within the park. The mining roads that were built serve as the roads tourists use today.

The effort to created the park was led by Bates Wilson, who served as the superintendent of Arches National Monument. After exploring the Canyonlands, he was convinced that it should become a national park. He led government officials, including Secretary of the Interior Stewart Udall, on tours inside the Canyonlands to convince them that the area should be preserved.