The John F. Kennedy Presidential Library and Museum is the nation’s official memorial to John F. Kennedy, 35th President of the United States. The library was designed by the architect I. M. Pei and built with the private donations of 36 million people from around the world. Dedicated on October 20, 1979, the Kennedy Presidential Library is one of the Presidential Libraries in the United States administered by the National Archives and Records Administration and the only one located in New England. The exhibits you see today are designed to tell the story of John F. Kennedy as much as possible in his own words, offering visitors a “you are there” experience in the world of the early 1960’s and the Kennedy White House. The Library’s museum exhibits change periodically to provide visitors with a wider understanding of the life and times of John F. Kennedy. 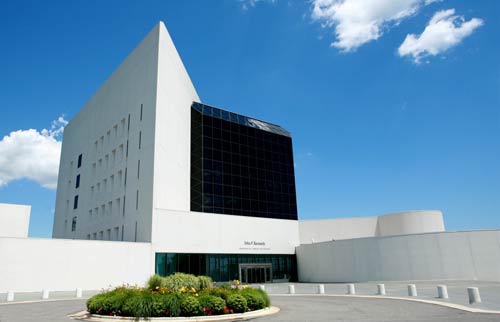 This library and museum is dedicated to the 35th President of the United States, John F. Kennedy. It is located in Boston, MA on a ten acre park that overlooks a magnificent body of water. The library and museum not only commemorates Kennedy's presidency, but also work by Ernest Hemingway as well as notes and documents from all aspects Kennedy's administration. Originally conceived by President Kennedy himself, along with architect John Carl Wernecke, they surveyed different locations around Boston offered by Harvard University. Kennedy felt that other presidential libraries were inappropriately placed, being too far away from "scholarly resources." He wanted the building to be placed by the Harvard Business Graduate School so it would face the Charles River. After his assassination November 1963, the location changed as his family figured out how to make a great memorial library to honor the late president's memory.  Many donations poured in to fund the library and museum, but it would not be dedicated until 1979, because there were many obstacles in bringing the concept to fruition.

On December 13, 1964, I.M. Pei, was chosen as architect of the building unanimously by the Kennedy Family.  His design involved a large glass pavilion encased by the simple geometric structure. The concrete tower at 125 feet tall, contains many offices and archives, while the circular section of the building contains two theaters. One of the obstacles that I.M. Pei had to overcome was the budget, which was one of the many reasons why construction was delayed. Pei wanted to construct the exterior with a more expensive stone, but had to switch to concrete. Ground was broken on 1978 and it was finished just in time for President Carter's dedication in 1979.

The JFK Presidential Library and Museum contains an eclectic array of exhibits and artifacts. Some of the seven Permanent exhibits are: "The Campaign Trail, an exhibit on the 1960 Presidential Campaign that includes Kennedy's campaign office and other memorabilia. An exhibit dedicated to the life of the First Lady, which includes artifacts such as pieces of her clothing, and "The Briefing Room" exhibit, which discusses the impact that television had on the Kennedy Presidency. There are also many temporary exhibits, too. The first floor of the library is occupied by Kennedy family portraits, videos, and presidential memorabilia. There are also plenty of books and research materials for visitors, students, and/or researchers to browse through. One of the most interesting aspects of this library and museum, is the art collection. Just a few of unique pieces are a finger painting by little Caroline or a professional bust of President John F. Kennedy by sculptor, Felix de Weldon. Another fixture of the library is the massive 400,000 artifacts of still photography amassed within the audiovisual archive that ranges from 1864-1984. These are just some of the things a visitor can experience at the JFK Presidential Library and Museum.