A perfect day's walk or museum for the history buff, The Overland Stage and Pony Express passed through the area and an inn was established for overnight stays. It has been restored and serves as the museum at the state park. Museum with historic exhibits The Army arrived in 1858 and constructed Camp Floyd to suppress a supposed Mormon rebellion. The Army remained here for three years before being recalled for the Civil War. Today, Camp Floyd State Park features three structures and a cemetery. 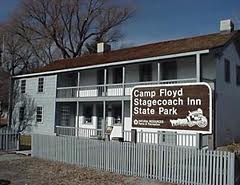 Believing Mormons were rebelling against the laws of the United States, President James Buchanan dispatched 3,500 troops, nearly one-third of the entire U.S. Army, to suppress the rumored rebellion in the Utah Territory. No rebellion or war ever took place in Utah. The army stayed to monitor the Mormons, explore the western frontier, and provide safety for immigrants moving west to California, Oregon, and Washington.

Camp Floyd, named in honor of Secretary of War John Floyd, was built by the army with the help of local citizens. The Army pumped nearly $200,000 into the local economy to build Camp Floyd. Camp followers soon increased the population of Camp Floyd and Fairfield to 7,000, making it the third largest city in the Utah territory. At their height, Camp Floyd was the largest military installation in the United States.

Used as a strategy by both the Northern and Southern States, Camp Floyd and the Utah War were an attempt to divert the nation's attention from the issue of states rights and slavery, to the Mormon problem and polygamy. Buchanan believed that Democrats and Republicans, northerners and southerners, could unite in an attempt to restore order to Utah, and he could thus divert attention from the crisis over slavery and tensions between the north and south. John Floyd, Secretary of War, also encouraged him, along with other southern Democrats. They also saw the potential to deplete the U.S. Treasury of millions of dollars by giving government contracts for the move, to southern businessmen and to turn the west from northern sympathies, by creating support for southern state's rights.

In 1861, the army left for the Civil War. Some $4,000,000 of Army surplus were sold for a few cents on the dollar. The names of those who participated in the Utah campaign, read like a "who's who" in Civil War Generals. Rosters include names like Johnston, Buford, Reynolds, Bee, Heath, Lander, and others.  Nearly all the buildings erected by the army were dismantled or demolished before their departure. Today, all that remains is the Commissary Building, which serves as a Camp Floyd museum, and the cemetery.

Camp Floyd Commissary and Museum
Constructed in 1858 by the soldiers of Johnston's Army, the Commissary Building served as a store of military equipment and provisions. It was sold to the Beardshall Family at auction in 1861, when the army was recalled for the Civil War. The building was relocated to its current site where it was used as the family's home in Fairfield. All other camp buildings were either sold, dismantled or destroyed. Today, the Commissary Building serves as the Camp Floyd museum.

Stagecoach Inn
Across the street from the Camp Floyd Commissary is the Stagecoach Inn, a two-story adobe and frame hotel built by John Carson in 1858. The Stagecoach Inn was the first stop south of Salt Lake City on the Overland Stage Route and also a stop on the Pony Express Route. Because of its proximity to old Camp Floyd, the clientele naturally included large numbers of armed personnel. It was one of the few respectable establishments in this frontier town. Seventeen saloons and other entertainment locations catered to the needs of a military population. The inn was restored from shambles in June 1959. It contains furnishings of the period, indicating the hospitality of the inn - not elegant, but comfortable.

Camp Floyd Cemetery
The cemetery was established in 1858 and abandoned three years later as the troops stationed at Camp Floyd returned to fight in the Civil War. A monument was dedicated by the War Department in 1913. The American Legion installed the metal fence and placed the granite markers in 1960. In 2009, ground penetrating radar determined the actual locations of the burials. New headstones were placed in 2011 to reflect the locations of the known burials. These headstones read “Unknown” in order to reflect that the identity of the burial is not known.