The Battle of Seven Pines took place during the Peninsula Campaign and is sometimes called Fair Oaks and Fair Oaks Station. The battle took place between May 31 and June 1, 1862. It pitted a Union Army of 34,000 men under General George B. McClellan against a Confederate Army of 39,000 men under General Joseph E. Johnston. Around 73,000 troops engaged in battle. The casualties totaled 13,736 with the Federals sustaining 5,739 casualties and the Rebels sustaining 7,997. This battle would prove critical in altering the fate of the war. The commander of the Army of Northern Virginia, Joseph Johnston, would be critically wounded. His being taken out of action for a time would allow Robert E. Lee being placed in the charge of the army, taking the war the North twice and out-commanding 4 Union commanders before Grant was placed in command. This battle was also a first in terms of the use of observations balloons, this was used by the Union army.

Map depicting battle plans for the Battle of Seven Pines 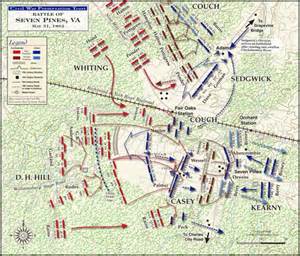 The Marker for the battle of Seven Pines 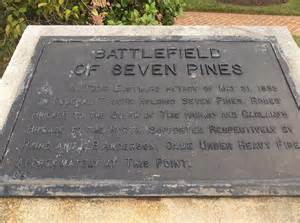 This is a real-time photo of Prof. Lowe ascending onboard the Intrepid during the battle. 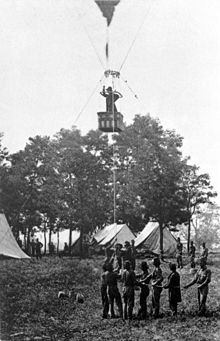 This Currier and Ives depiction of the battle was printed soon after the battle. 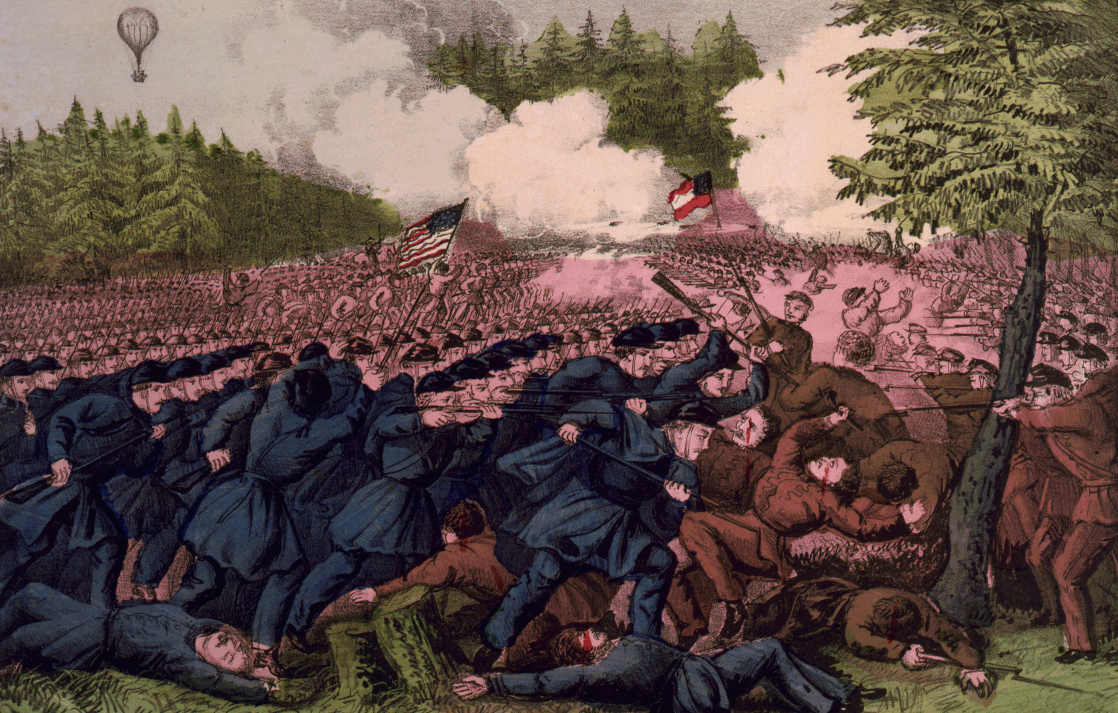 Village of Fair Oaks following the battle. These buildings were surrounded by UNion fortifications that faced a number of massive assaults launched by the Confederate Army. 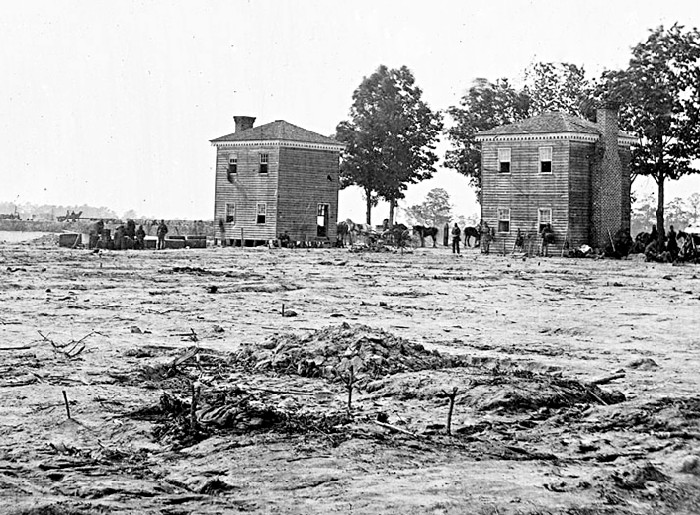 This sketch, done during the battle, depicts General Franklin of the Union army and his VI (6th) Corps retreating in the face of massive assaults. 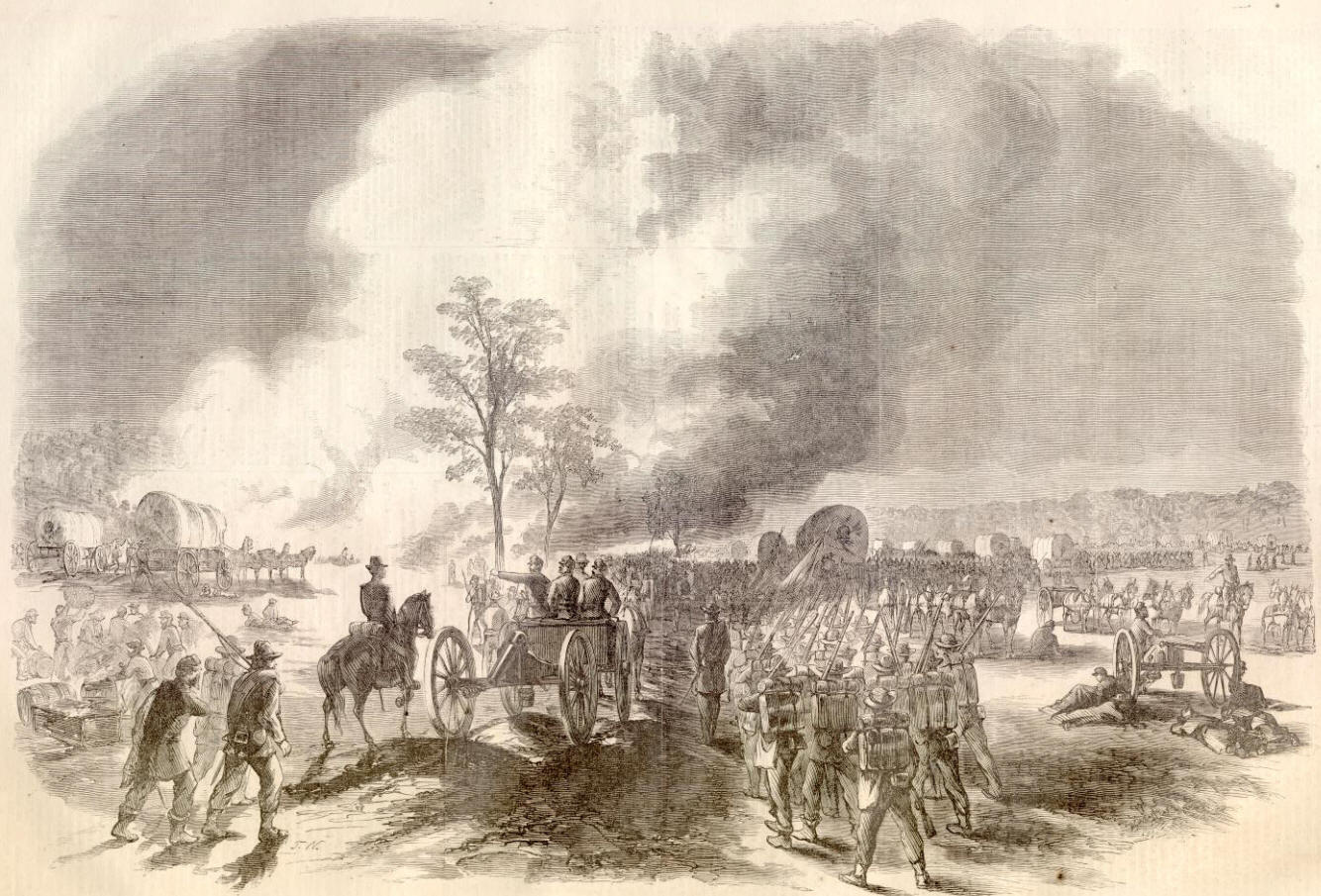 Union artillery near Seven Pines prior to the battle 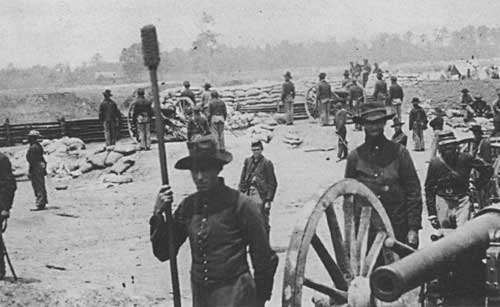 Around the time of the battle, Gen. George B. McClellan was pursuing the Army of Northern Virginia. The pursuit of the Confederates had led the Union to the outskirts of the Confederate capital Richmond, Virginia. Gen. Joseph Johnston, leader of the Confederate Army held a defensive position by the end of May. On May 31st, Gen. Johnston attempted to overwhelm two Federal corps that, at the time, appeared isolated on the south end of the Chickahominy River. The attack was conducted by the Confederates in a response to halt the Union advance in the Peninsula Campaign. The ground around the river was swampy which made maneuvering very difficult. The speed of the river, due to the rains of the spring, made the river nearly impossible to cross. A major storm on the same day also threatened the only bridge that connected the union army to their reinforcements.

Johnston's assault was not well coordinated but it succeeded in driving back the IV Corps under Gen. Erasmus Keyes; though it resulted in Johnston being critically wounded. The Federal corps had heavy casualties and were reinforced by the III Corps as Sedgwick’s division crossed the river on grapevine bridges. The federal position was finally stable enough to push back the Rebel assault.

As the battle raged, the newly formed Union Army Balloon Corps would be used for the first time. Commanded by Prof. Thaddeus S.C. Lowe, the balloon corps was critical in relaying time-sensitive information to General McClellan regarding the movements of the Confederate Army. Two were used, the Washington and Intrepid. Even with this new technology and intelligence gathering-corps, McClellan would still underestimate Johnston's replacement, Lee.

The result of the battle was inconclusive. Both sides claimed victory. The aftermath of battle had two important consequences. McClellan was horrified by the sight of dead men especially his; this led him to be more cautious in battle. These decisions by McClellan would eventually doom the campaign pushing in on the Rebels capital of Richmond. The other result of the battle was the rise to power of Robert E. Lee. Johnston was wounded at the battle resulting in the Confederates replacement with Robert E. Lee who had been serving as President Davis military advisor. This replacement by Lee would prove critical for the Confederate Army for the rest of the war.