Built in 1890, Cape Meares Light served as the light station for Tillamook Bay. When it was built, the lighthouse complex included two keeper's houses, two oil houses, and two cisterns, and was connected to the light by a 1,000 feet boardwalk. Later additions included an attached workroom in 1895 and a garage in 1934. In 1963, the lighthouse was deactivated and replaced by a newer tower.The following year, the Coast Guard made plans to demolish the light. However, due to public outcry, the plans fell through, and the Coast Guard turned the station over to Tillamook County. The light remained vacant until 1968, when the site was turned over to the Oregon State Parks Department. During this time, vandalism became a major problem for the light. Eventually, the vandalism took its toll on the keeper's quarters and they were subsequently demolished. Among the damage, four of the bulls-eyes in the Fresnel lens were stolen. That same year, the light was opened up to the public and the light was restored, with the exception of the missing bulls-eyes. Since then, three of the four missing bulls-eyes have been recovered. In 1980, the tower itself was opened to the public 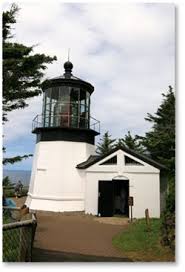