The Cy Young Memorial Park in Newcomerstown, Ohio remembers one of baseball's original legends. Young played in the first World Series and is the holder of various records and distinctions, such as throwing the first game in modern baseball. His career spanned 21 years, beginning in 1890 and ending in 1911. This memorial park is part of several local tributes to the athlete in the area of Newcomerstown, which is where he retired to spend the last years of his life.

Sign on the entrance to the park (Source: http://www.cleveland.com/sports/index.ssf/2008/11/cy_young_forever_the_best_in_n.html) 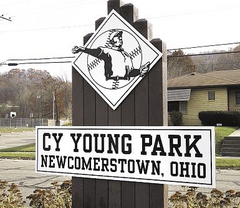 A photograph of Cy Young in uniform. (Source: http://www.findagrave.com/cgi-bin/fg.cgi?page=gr&GRid=1251) 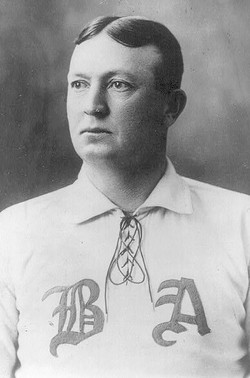 “Cy” Young was born Denton True Young in 1867 in Gilmore Ohio, and passed away in Newcomerstown, Tuscawaras county in 1955.1 He filled the 88 years in between in part by scoring numerous records and achievements that distinguish his legacy as a star athlete. His first professional team was the Cleaveland Spiders, whom he stayed with for 22 seasons, from 1890-1898. Then, he played for the St. Louis Perfectos from 1899-1900, the Boston Red Sox from 1901-1908, the Cleveland Naps from 1909 to 1910, and finally closed out his career with the Boston Rustlers in 1911. 2

Young played during the first modern World Series, which was hosted at the Huntington Avenue Baseball Grounds in 1903.3 In 1904, Young pitched the first perfect game against Rube Waddell.4 His career continued to be very eventful, adding successes like three no-hitter games over the years.5 Young eventually finished his career with a total of 511 wins, which makes him the record-holder for pitching victories even today.6

Long after his career had officially ended, Young was inducted into the Baseball Hall of Fame in 1937.7 After leaving his career in baseball behind, Young largely spent the remainder of his days working in the country.8 Not long after his  death in 1955, the Cy Young Award 1956 was created to honor his legacy and celebrate young pitchers.9