Sulphur Dell Ballpark was home to many teams in its time most notably the Nashville Americans, the Negro League Elite Giants, and the Volunteers. Constructed in the 18th century, the ballpark had many outstanding features but none more powerful than right field. The oddly shaped dimensions of the field added new features of play, keeping the game in Sulphur Dell for many years until it's recent demise in 1969. Sulphur Dell also boasted a fine historical record as various teams as well as Babe Ruth came to town.

Sulphur Dell's outfield boast one of the most distinguishable features in baseball history. The height of right field caused right fielders to be known as "mountain goats". 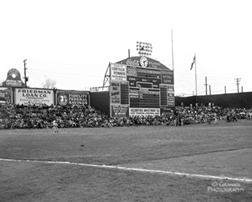 Sulphur Dell is known as one of the most historic parks in baseball. Numerous teams battled on the field for over a hundred years until its demise in 1969. 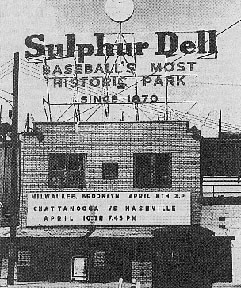 Sulphur Dell Ballpark was created in the 18th century in downtown Nashville. First known as Athletic Park, Sulphur Dell was built as a way for Union soldiers in the Civil War to teach the people of Nashville the northern baseball game. Later as the park grew in popularity, it was renamed Sulpher Dell Ballpark because of the sulfur (it is also spelled as sulphur) spring located closely nearby the Cumberland River.

Although named after a sulfur spring, Sulphur Dell had another name because of its defining features: "the Dump". As a dell, the ballpark was located in a valley that smelled of sulfur in the area. However, garbage would wash up into the area giving and even worse smell, hence the name "the Dump". Although known for these negative aspects, "the Dump" gave Sulphur Dell recognition for years.

Another interesting feature of the park was the high right field on which fielders would slip, climb, and dive all over the mound up to the fence. Much like other fields of its time, the field was established with a distinguishing feature, the right field fence being 25 feet higher than the infield. Designers made up for this with making a large wall as well as a closer fence in right field. Right field was only 262 feet from home plate, unheard of in its time. The incline reached 45 degrees, making fielders climb and crawl to catch balls in that area of the outfield. Right Fielders came to be known as "mountain goats".

However, Sulphur Dell's place in history comes from its deep riches of teams over the years. "The Dump" was home to 5 different teams. The Negro League Nashville Elite Giants called the ballpark home for two years in 1933-34. The Volunteers used the park for 61 years until it was demolished in 1969. Sulphur Dell would also host Babe Ruth at one time and the fire chief had to hose down the trash in the outfield to keep the smell away. "The Dump" will live on as an important piece of history in the Nashville area as ideas to rebuild a new ballpark on the site give it new life.