Founded in 1965 and housing over 35,000 artifacts, this 125,000 square foot museum is located in the heart of Midtown Detroit's Cultural Center. The Charles H. Wright Museum of African American History is the world's largest institution dedicated to the African American experience. The Museum provides exhibitions and programs that explore the diversity of African American history and culture. The Museum houses over 30,000 artifacts and archival materials and is home to the Blanche Coggin Underground Railroad Collection, Harriet Tubman Museum Collection, Coleman A. Young Collection and the Sheffield Collection, a repository of documents of the labor movement in Detroit.

Front entrance of the the Charles H. Wright Museum of African American History in Detroit, Michigan. 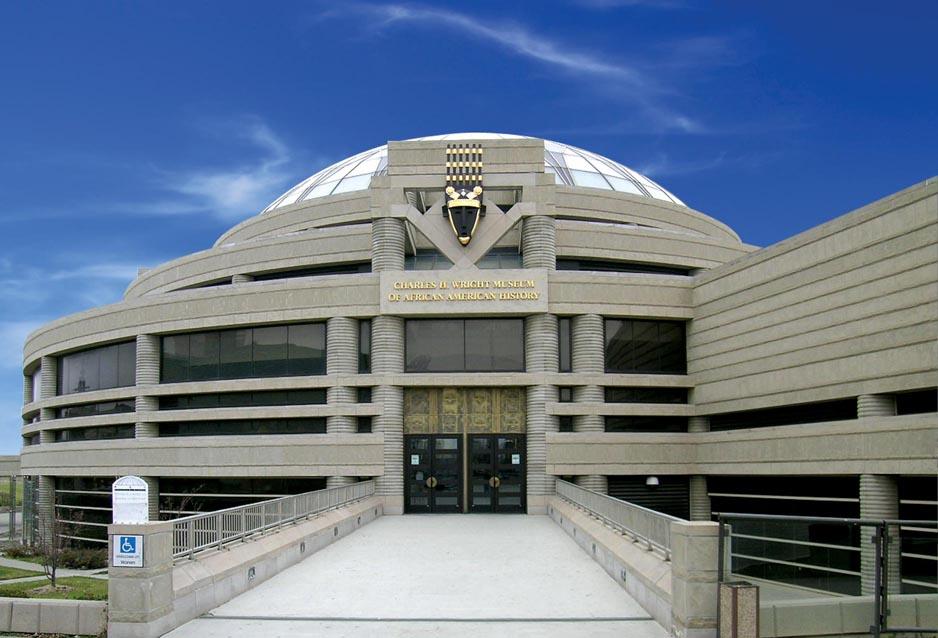 Dr. Charles Wright, an obstetrician and gynecologist, envisioned an institution to preserve Black history after visiting a memorial to Danish World War II heroes in Denmark. As a result of this visit, he was convinced that African Americans needed a similar resource center to document, preserve and educate the public on their history, life and culture.

In 1965, Dr. Wright in partnership with 30 other like-minded Detroiters established Detroit's first International Afro-American Museum. The museum, known by the acronym IAM, opened on West Grand Boulevard with dozens of exhibits showcasing such items as African masks from Nigeria and Ghana and the inventions of Elijah McCoy. A year later, the IAM traveling museum, housed in a converted mobile home, began touring the state and spreading information about the contributions of African Americans. The Museum quickly outgrew its quarters.

In the fall of 1978, the City of Detroit agreed to lease the Museum a plot of land between John R and Brush Streets to build a facility five times larger than its predecessor. In order to raise funds, Detroit Public School students participated in a "Buy a Brick" campaign, raising $80,000 for the new facility. Following the students' initiative, a group of adults started the Million Dollar Club in which each member pledged at least $1,000. This major fundraiser earned $300,000.

In 1985, the Afro-American Museum and the City of Detroit formed a partnership to build a new facility in the city's University Cultural Center, securing the funding to complete the $3.5 million facility.

The name of the International Afro-American Museum was changed to the Museum of African American History and ground was broken for a new facility on May 21, 1985. Two years later, the doors of the Museum of African American History were reopened to the public at 301 Frederick Douglass. The new 28,000-square-foot structure accommodated a range of offerings. Featuring a series of exhibits, lectures, concerts, cultural celebrations, festivals and programs designed especially for children, it preserved the past and strengthened the future.

Once again the museum outgrew its facility and grander ideas for a new museum took shape. In 1992, Detroit voters authorized the City of Detroit to sell construction bonds to finance a larger building and ground was broken for the third generation of the Museum in August of 1993. In April of 1997, a 120,000 square-foot, state-of-the-art facility opened, making it the largest African American historical museum in the world.

One year later, the Museum was renamed the Charles H. Wright Museum of African American History in honor of its founder. The museum continues to serve its community as a place of exploration and celebration. With generous support from individuals, foundations, corporations, and government sources, the Wright Museum continues to be a cultural icon in the city of Detroit and throughout the world.