The Bank of Italy building opened in 1908 and is located in San Francisco's Financial District. The Bank of Italy moved into this building after the San Francisco Fire of 1906 destroyed their building and many others throughout the city. This bank was first established to serve local working class citizens, especially Italians from the city's North Beach (Little Italy) neighborhood. It served for over 10 years as headquarters for the Bank of Italy and later merged with the Bank of America. It is now a National Historic Landmark and also known as the Clay‐Montgomery building. 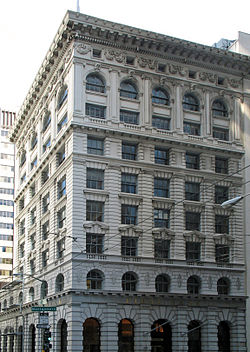 When A.P. Giannini and his associates launched the Bank of Italy in North Beach on October 17, 1904, they were headquartered in a section of the Drexler Building on Montgomery (now Columbus) Avenue which had formerly housed a saloon. After the San Francisco earthquake and fire destroyed this structure in 1906, the bank was forced to seek other quarters. Shortly after this disaster, Giannini set up two makeshift offices. Shortly thereafter, more permanent accommodation was found in a building on Montgomery Avenue near the site of the original headquarters.

This little-altered, eight-story, Renaissance Revival structure, situated in San Francisco's financial district, served as headquarters for A. P. Giannini 's Bank of Italy from August 17, 1908 to 1921, when operations were moved to a newer building at 1 Powell Street.  In the 1930’s the old headquarters at 552 Montgomery Street became a branch of the Bank of America.

The structure of the building is steel-framed, consisting of a two-story base, a four-story shaft, and a two-story crown. The building was designed by Frank T. Shea of Shea & Lofquist, architects. The ground floor facade is built from granite cladding while the upper ones, which mimic the design forms, are from less expensive terra-cotta. The interior is a jewel box of white marble and gold leaf detailing with a spectacular coffered ceiling. Although F.T. Shea was the building's architect, Giannini himself closely supervised its design and construction.

On September 4, 2012 men's luxury retailer Wingtip (formerly known as On The Fly) opened a retail location on the building's ground floor, with tailoring and barber services in the basement vault.