The Old Courthouse in downtown St. Louis is one of America’s most important historic sites. The courthouse used to be a combination of a federal and a state courthouse. The courthouse building was the tallest building in Missouri until 1896, when Union Station was built. Today it is one of the centerpieces in the Jefferson National Expansion Memorial, together with the mighty Gateway Arch. It features restored courtrooms, a decorated dome, Dioramas, the "Gateway To The West" film and galleries depicting the history of St. Louis. Over the past 150 years, Old Courthouse remained as one of the St. Louis’ most prominent architectural landmarks.

View of Old Courthouse and Gateway Arch from Kiener Plaza. 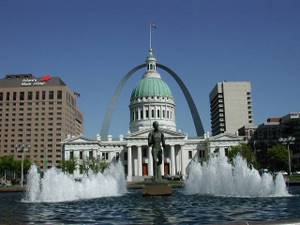 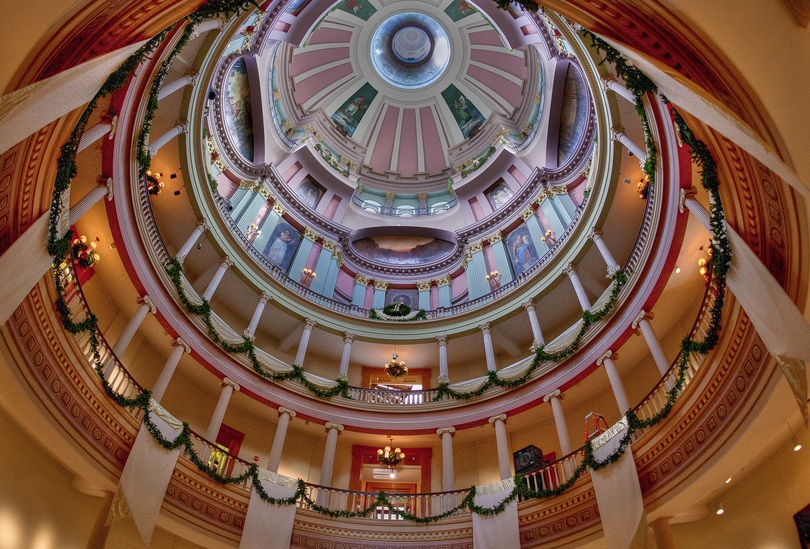 In 1816 Auguste Chouteau and Judge John B.C. Lucas donated land to St. Louis County for a courthouse near the St. Louis riverfront. Built between 1839 and 1864, this Greek Revival, three-story, brick and stone structure was designed by several architects over the period of its construction (Henry Singleton, William Twombly, George I. Barnett, Robert S. Mitchell, Thomas D. F. Lanham, and William Ruumbold) , and has been altered several times, including a major restoration and remodeling completed in 1942. Basically a Greek Cross in plan, the junction of the four wings forms a central rotunda surmounted by a Renaissance style cast-iron dome and lantern.

In the interior of the rotunda, the first three-stories are Greek Revival, but the later, upper levels, including the dome and lantern are Late Renaissance, almost Baroque, in style.This upper dome is the first cast iron dome ever built. It was erected in 1862 and still stands today as part of the Jefferson National Expansion Memorial. The dome features four beautiful frescoes created by Carl Wimar, a German immigrant famous for his paintings of American Indian lifestyles and westward expansion. The four murals align with the four cardinal directions, and each depicts a significant event in St. Louis’ history that occurred in that direction: Hernando DeSoto encountering the Mississippi River in 1541, Pierre Laclede and Auguste Chouteau founding St. Louis in 1764, the British-led Revolutionary War attack on St. Louis in 1780, and the proposed transcontinental railroad route through the Rocky Mountains’ Cochetopa Pass. Allegorical and portraits of famous Americans were painted over other Wimar originals by Ettore Miragoli in 1880.
The Old Courthouse was the site of hundreds of suits for freedom, but one gained notoriety - It was the scene of Dred Scott’s historic slavery trial in 1847, which focused national attention on the slavery issue. Scott won his case in St. Louis but the decision was overturned in the U.S. Supreme Court in 1857. The court ruled that Scott was not a citizen and therefore not entitled to sue. The decision served as a flashpoint for the start of the Civil War. After the decision, Scott and his wife Harriett were freed by their owner. Scott died in 1858. The Old Courthouse features an exhibition on this pivotal event, called “Dred Scott: A Legacy of Courage.” Re-creations of the trial are conducted throughout the year at the Old Courthouse, and Scott’s grave can be visited at Calvary Cemetery. The last known slave sale in St. Louis was held as part of a property settlement on the steps of the Old Courthouse in 1861. A large anti-slavery crowd refused to bid, and slave traders never tried it again in St. Louis.
It is also the place where Virginia Minor's case for a woman's right to vote came to trial in the 1870s. Virginia Minor was an officer in the National Woman Suffrage Association, which during the 1872 presidential election decided to challenge voting restrictions in the United States which excluded women. The nation-wide movement of 1872 originated with Virginia and her husband Francis Minor. Virginia Minor’s attempt to register to vote was refused by the ward registrar in St. Louis, and the Minors sued him in the St. Louis Circuit court.