The Silver River Museum is located in Ocala, Florida within the Silver Springs State Park. The museum is a product of the Marion County school system working with the Florida Park Service to create an interactive educational environment for the children of Marion County. Throughout the week it is closed to the public to provide daily classes for students, opening to the public only on the weekends and most holidays.

This mammoth skeleton is one of the many items on display in the museum. 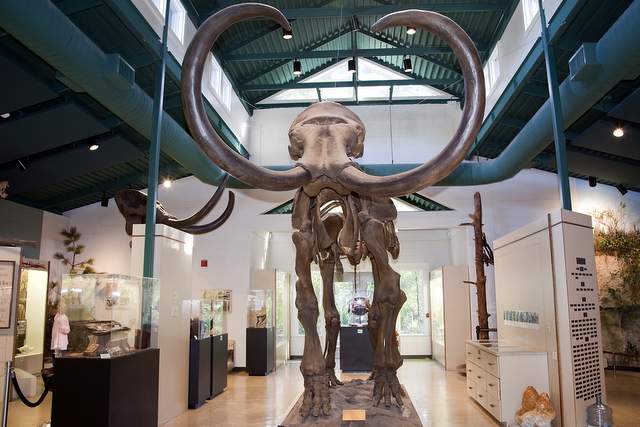 The road to creating the Silver River Museum began in 1987 with the award of Christa McAuliffe Fellowship. The Fellowship was given to create a museum and educational center for Marion County. In 1991, with the help of local citizens, businesses, the school board, and some funding from the state of Florida, the museum opened its doors.

The museum, while only open to the public on the weekends, holds classes for students throughout the week. According to the Marion County Public school website, the museum consists of the main museum and a recently added second wing, several classrooms, a research library, an 1800s Pioneer Settlement, and a 1930s era one-room schoolhouse that was used by African American children during the days of segregation.

The museum itself has artifacts tracing back to Florida's infancy. Among these artifacts is the skull of a saber-tooth tiger, giant mammoth teeth, and the jaws of a megalodon. In addition, the museum holds several human artifacts that can trace Native Americans from the time they settled in Florida as hunters. The exhibits feature taxidermy scenes, arrowheads, and a hollowed-out canoe used by Native Americans.

Visitors to the museum can also trace Spanish settlers as well as see historical recreations and artifacts from the American Civil War.

9AM - 5PM on weekends and most holidays, closed during the week to all but students