This slender skyscraper at East Wacker Drive was built between 1926 and 1928, as the headquarters of the Mather Stock Car Company. The Mather Tower was named for Alonzo C. Mather, a businessman and philanthropist who was born in New York in 1848. Mather became the founder of the Mather Stock Car Company, a leading manufacturer of railroad livestock cars designed to provide more humane shipment of animals. The tower, now known by its address, was Chicago's second tallest building (41 stories) when it was completed in 1928.

Mather Tower, with its tall "spire-like" tower, provides one of the most dramatic examples of the influence of the 1923 Chicago Zoning Ordinance on the design of Chicago skyscrapers in the 1920s. 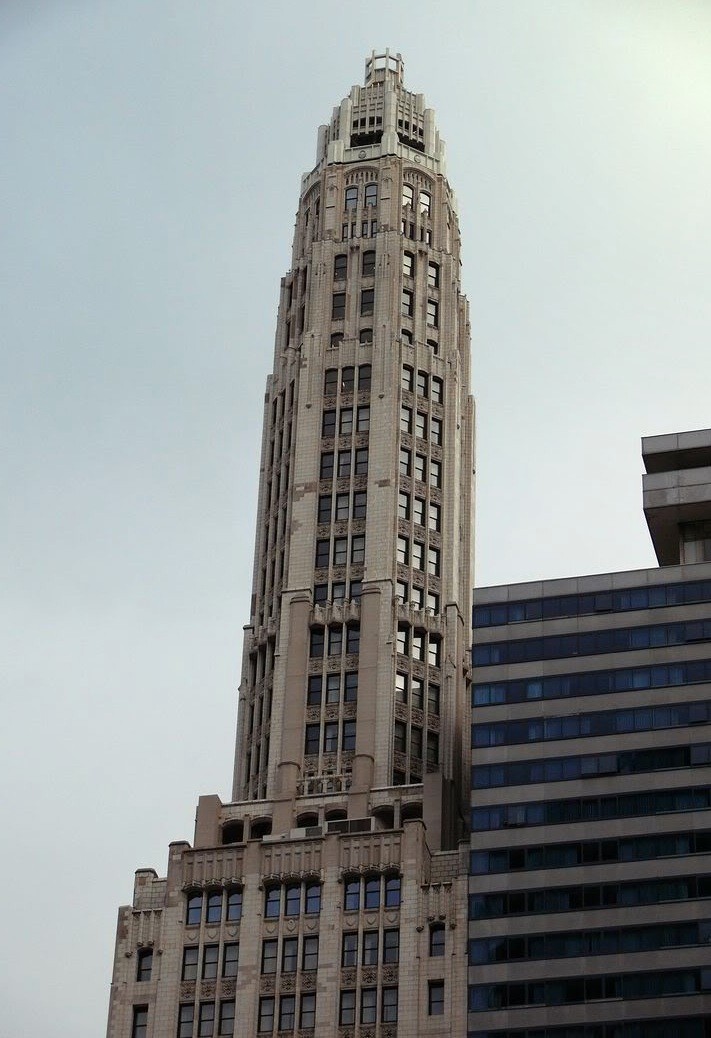 Mather Tower is Chicago's most slender skyscraper, a Jazz Age silhouette against the city's skyline. Richly clad in stylized Gothic terra cotta, Mather is one of Chicago’s best "Modernistic" skyscrapers, combining modern form with lush historic ornament both in its exterior and interior. It reflects Chicago's 1920s obsession with height, encouraged by the 1923 Chicago Zoning Ordinance which called for tall, slender, "setback" towers. Mather Tower was commissioned in 1926 as a speculative office building,  envisioned by developer and businessman Alonzo C. Mather (1848-1930) to be part of a  set of twin towers that would make a bold urban statement at the north "entrance" to the  Loop. While its twin on Michigan Avenue was never built, Mather Tower became one of about two dozen Chicago skyscrapers of the era that were built partly as the result of the building boom fueled by post-World War I expansion. Most of these had large amounts of speculative office space and were designed in accordance with the city's new zoning code enacted in 1923.

The 1923 zoning code governed the shape of Chicago's skyscrapers through the early 1930s, altering the skyline of the city. During that time, the total volume of office space more than doubled in Chicago. Under the code, a building could rise to 264 feet at the sidewalk, with habitable towers above that which occupied no more than 25% of the lot size, or one-sixth of the cubic area of the main building - a formula which encouraged skyscrapers with multiple setbacks. The builders of Mather Tower employed the formula in a way that created the tallest and thinnest possible structure on the available lot; thereby creating this "needle" skyscraper that was, upon its completion in 1928, the city's tallest building at 519 feet above the sidewalk. Rather than a series of small setbacks that retained more of the largest possible office floors, the creators of Mather Tower chose a design that placed dramatic emphasis on the tower itself, by extending it to the maximum possible height with many slightly telescoping spaces of small square footage.