Cherrydale is a historic home located today on Furman University's campus. It was built sometime between 1852 and 1857 by the university's president, James Clement Furman. Between the years of 1857 and 1860, Furman and his wife remodeled the house's structure to a more Greek-Revival style look and by 1860 the Furmans named their property "Cherrydale." The farm was located three miles outside downtown Greensville so Mr. Furman could have a separate residence from campus while school was in session. Throughout their time at Cherrydale, Furman's wife kept letters that went into vivid detail about what life was like on Cherrydale. After retiring from the university, Furman died in 1891. His wife would continue to live at Cherrydale until her death in 1911. The property was eventually donated to the university and became its alumni house in 1999. It is listed on the National Register of Historic Places.

A modern side view of the Cherrydale House.

A Black and white picture of the Cherrydale House taken sometime around the 1950s or 60s. 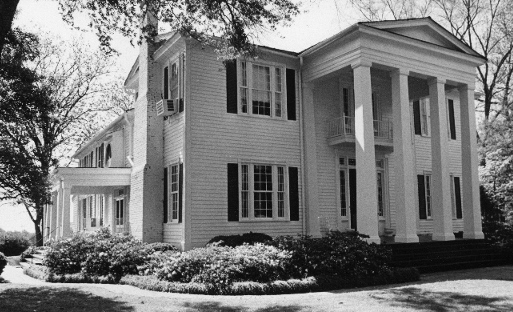 A photo of the Cherrydale House being physically moved from its' original location, to a closer spot on Furman's campus. 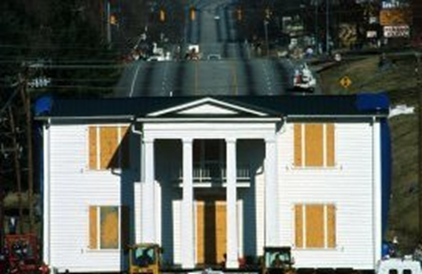 A selection from the 1869 University Catalogue that highlights the University's strict rule against fist fighting.

A letter from Dr. Furman, discussing his plans for the future of Furman University. 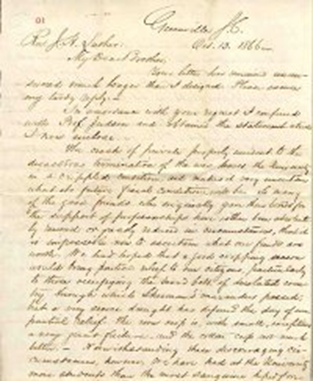 In universities throughout the United States there exists a varied degree of the historical legacy of their pasts. Whether it be a statue, museum, or specific building on campus, these fragments of the past help remind students and faculty as to the legacy and tradition that they continue to carry on. One of these university historical sites not only reminds those who attend, but also pays homage to the university’s founder. At Furman University in Greenville, South Carolina this reminder of where they come from is instilled in the Cherrydale Alumni House situated on the university’s grounds. Formally owned by the founder and the first president of the university James Clement Furman, the Greek Revival-style house was once the residence of Dr. Furman during the course of his term as president of the university. While the house itself appears as a luxurious summer retreat, the house was actually once a small farmhouse that was situated outside campus at the foot of Piney and Paris Mountain for 150 years until 1999 when it was donated to Furman. The house now occupies the highest point on the Furman campus.

While the focus is Cherrydale, the story of Dr. Furman and the University must be taken into account in order to understand its importance. James Clement Thurman was born in December of 1809 as the thirteenth out of the fifteen children of Richard and Dorothea Burn Furman. During his teenage years, Furman contracted malaria that continued to recur throughout his life which caused him to remain frail and weak on a daily basis. Furman attended the college of Charleston and following his graduation in 1826 entered the Furman Institute founded by his father to become an ordained Baptist pastor. In April of 1832, Furman became ordained by the Charleston Baptist Church and in the following year in April 1833 he married Harriet Eloise Davis. However, while it seemed that the Furmans had a happy family life it was to eventually end in tragedy when Furman’s Eldest daughter Elizabeth Williams Smith Furman died from a brief illness and when his wife Harriet died from consumption nine years later. Following the tragedy of his loved ones’ death, Furman became more involved in his professional life.

In the years prior to his loved ones' deaths, Furman became a senior professor at the Furman Institute in 1845. Five years after obtaining this position, Furman purchased a site in Greensville for which he planned to build a future university. The school opened in McBee Hall, a small frame structure that nowadays stands beside the lake on the Furman campus. In 1860 Furman was one of the signers of the Ordinance of Secession, in favor of secession from the Union.

Following the outbreak of the American Civil War in 1861 a majority of Furman’s students went off to serve the military. The university was then forced to close due to lack of funds. It was not until February of 1866 that the university was again reopened. While it appeared as if university affairs were back on track, the overall number of students enrolled at the University only amounted to 45 students by the year 1867 out of 112 from the previous year. As a result, the university soon fell into debt. Despite this, Dr. Furman persisted to keep the university open when he claimed that twenty to thirty new applicant had expressed interest in coming to the university for the next semester. In 1869, Furman’s prediction came true when enrollment rose to 69 students overall.

During his time as president of the university, Furman lived with his second wife Mary Glenn Davis Furman in a comfortable farmhouse three miles off the Furman campus. It is known that in 1852, George Washington Green purchased the 350 acres of land for $1,500. It was on these lands that he built “Green Farm.” Green later moved to Mississippi in March of 1857 and sold the 100 acres to James Clement Furman for $7,000. For three years Furman and his family lived on this property, adding on to the house with four rooms and a new entrance with a front porch as well as a three bay portico and four Greek Revival-style columnns in accordance to the idea that Mrs. Furman wanted to remodel the house after her childhood home. While James Furman owned the house of Cherrydale, it was his wife that spent more time at the house. In 1881, Furman retired as president and spent his final years at Cherrydale writing and preaching all the while continuing to take an active role in the university’s affairs over the course of the next decade. On March 3rd, 1891, Furman died at the age of eighty-one in one of the Cherrydale house's upstairs bedrooms.

Following his death, Furman was buried at Springwood Cemetery and in accordance to his will, gave ownership of Cherrydale to his wife Mary. However, while Mrs. Furman continued to live on Cherrydale until she died in 1911, she sold much of the house's surrounding land. Following her death, the house’s ownership was transferred along with the remaining property to her children Dr. Davis Furman, Marnie Furman Goldsmith and Kinkaid Furman. The house was later inhabited by Mrs. Marnie Furman Goldsmith who lived there until the mid-1930s. She later sold Cherrydale to Manufacturing Tycoons Mr. and Mrs. Eugene Stone Plant. Following its purchase from the Stone family, the Cherrydale house was renovated to include electricity, heat, and water. By the year 1981, The Stone family had acquired the rights to the Umbro Manufacturing Plant known for its production of athletic apparel. It was with this newfound ownership that the Stone family continued to prosper as its sales brought in a total number of $100 million a year by the end of the 1980s. The Stone family continued to maintain ownership of the Cherrydale House as well as the Umbro plant far into the 1990s, in which they continued renovating the Cherrydale house as a guest house and entered into new ventures with the Umbro Company. However by 1998 AIG Baker had bought the property of Umbro International Plant to make a Cherrydale Shopping Center. Following the purchase, both the Stones and AIG Baker gave Cherrydale back to Furman University. In March of 1999, the Cherrydale house was physically moved along Poinsett Highway for three miles by a group of Virginian movers and engineers to its current location on Furman University’s campus. During the course of the school’s Homecoming season of that same year, the house was christened “The Cherrydale Alumni House” and to this day remains as an historic landmark.